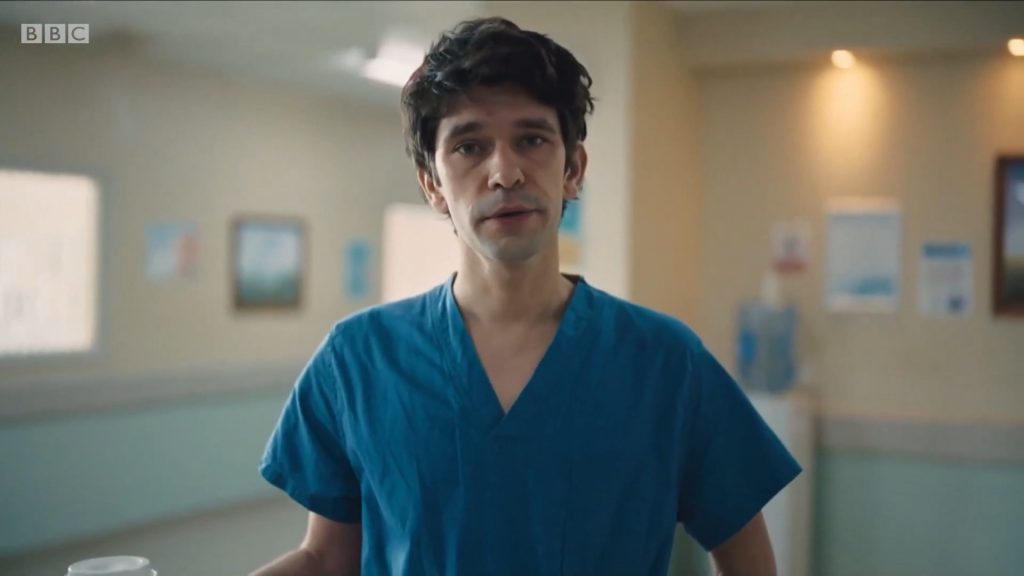 There’s something very visceral about This Is Going To Hurt, in the most literal sense of the word: the series, which adapts writer Adam Kay’s 2017 memoir of the same name, is an uncompromising and often graphic look at life as a junior doctor in the NHS. It’s also, however, very funny – that unrelenting approach balanced by a caustic sense of humour.

The series stars Ben Whishaw as Kay, an acting consultant on an Obstetrics and Gynaecology ward; This Is Going To Hurt is a broadly fictionalised depiction of Kay’s life, drawing heavily on his own experiences as a junior doctor. Whishaw and Kay have described This Is Going To Hurt as “a love letter to the NHS”. It is – the affection, and indeed sympathy, it has for its workers is always obvious enough – but just as often the love letter reads like a searing indictment of the health service’s every limitation. Whishaw’s Kay is exhausted and overwhelmed, seemingly only getting by on momentum alone; in quiet moments, he’s got this haunted thousand-yard stare, which disappears again as soon as that all-too-brief reprieve ends.

It makes for a nice companion piece to BBC One’s recent police drama The Responder, actually, with the two series sharing a lot in common. They’re both about these already very precarious characters placed under intense stress and strain; they’re both written from personal experience, with a certain edge and authenticity that even the most extensive research wouldn’t provide. Whishaw’s Adam Kay proves a complicated and flawed protagonist, much like Martin Freeman’s Chris Carson; he’s short-tempered and rude, acerbic and condescending, arrogant and manipulative. (It is, if nothing else, a less than flattering self-portrait from the real Kay, who wrote all seven episodes of the series.)

Whishaw takes to the role well, making Kay likeable despite – and, really, because – of all that. He’s got great comic timing, each dry little aside delivered perfectly; Kay breaks the fourth wall often, giving the series the sense of something confessional, inviting the audience into that world with him. It becomes intimate, even vulnerable, and Whishaw brings a real sense of interiority to that – for all that the character is clearly a difficult person, he proves easy to understand as well.

Of the supporting cast, Ambika Mod as student doctor Shruti stands out in particular. Shruti is inexperienced and struggling, caught between the demands of the job and her still-looming exams; even as she’s delivering babies she’s never far from her textbooks. Mod has great repartee with Whishaw, which is a big part of why the series is as funny as it is. (On the ward, the doctors have developed their own shorthand slang to refer to different conditions and cases – there’s this great bit where Shruti tries to offer her own, and Adam shuts her down in this very withering way. Mod plays the reaction really well, the switch from initial enthusiasm and to disappointed crumpling very funny.) Whishaw is understandably and rightly going to be the headline here, but Mod is This Is Going To Hurt’s real find.

One of the big themes of This Is Going To Hurt is the strain working in medicine puts on their personal lives. Adam frequently misses dinners, birthdays, engagement parties; his relationship with boyfriend Harry is faltering and at times seems close to falling apart. Their relationship is the emotional throughline of This Is Going To Hurt, in a way the spine of the series – it’s as much about Adam’s discomfort in his own life as it is his job. Indeed, there are moments where it seems like, for all that Adam haunted by the job, he’d rather be there in amongst the chaos than spending time in his own life – almost positioning the medicine somewhere between an addiction and a coping mechanism. “I used to think I was good at medicine and bad at the other stuff,” he reflects. “I’m not doing so good at either right now.”

Ultimately, This Is Going To Hurt is deeply watchable; for all that its drama is visceral and intense, it’s intimate too, and always very funny. Between Whishaw and Mod’s performances, Kay’s script, and Lucy Forbes and Tom Kingsley’s assured direction, the series manages an impressive tonal balance – it’s well-worth watching, one of the most memorable new dramas of the year so far.