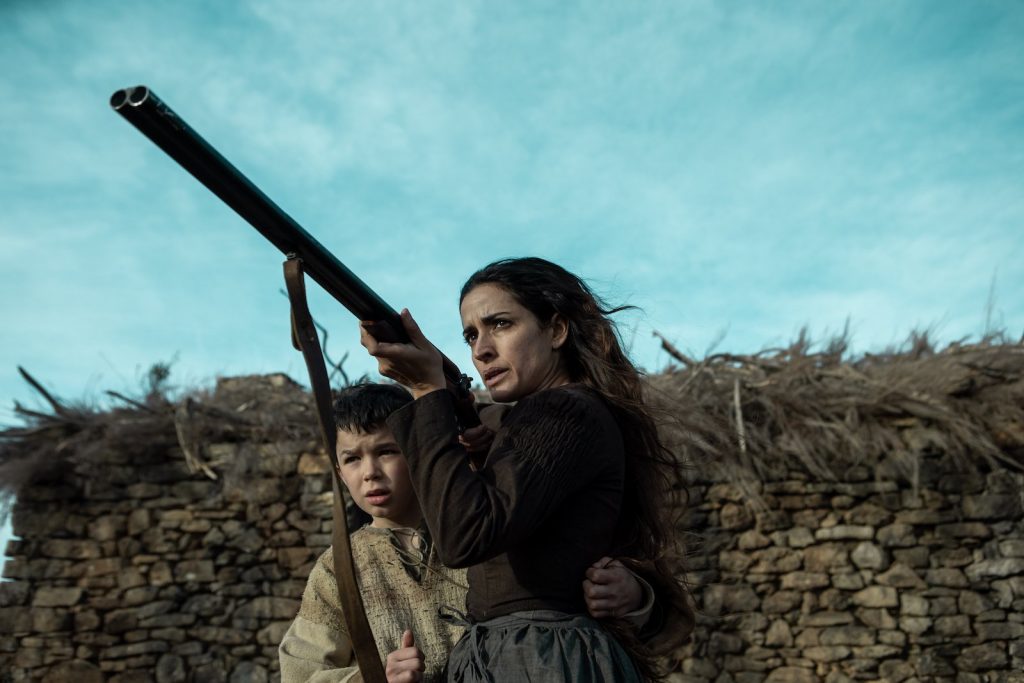 The most persistent problem with creature films is repetitiveness. Most genre films lack innovation and clarity of thought. This leads to a laggard execution and a disappointing end result. An over-familiarity with the tropes often leaves little room for character development. For the writers of ‘The Wasteland’ (or ‘The Beast’ a.k.a El páramo), this does not prove to be a challenge. Without giving too many details away, the film begins with a caption about the setting: 19th century war-ravaged Spain. A family of three peacefully exists on their isolated farm in the middle of nowhere. Fenced by skulls on a stick, the beyond harbors violence and madness. When a stranger floats to their house, wounded and conscious, they decide to tend to him.

On regaining his senses, the stranger shockingly kills himself. Salvador, the patriarch, decides against his wife and son’s protests, to deliver the man’s remains to his family. He ventures into the beyond, unsure if he will ever return. Lucia and Diego wait for his return, facing a challenging test against time. The minimal setting allows the director to frame the tension around the mother-son duo. What most of its peers do is follow the exact opposite of this. Without ever compromising the authenticity of the writing, he navigates the task of introducing and integrating the creature as the central conflict of the story.

‘The Wasteland’ does not purely rely on the mysterious beast to amplify his narrative soundness. Instead, it is another element within his characters’ perception. Themes such as paranoia and hysteria have a strong presence in the story. They are the key drivers for the story that merely uses the deception of the beast to create tension. On a more micro level, the film touches upon the nature of individuality and survival. The keynotes about Lucia and Diego are sufficiently developed to better relate to them. Loneliness weighs heavy on the former who is driven crazy in the absence of her partner. Clever camerawork and the haunting vastness of the landscape create a dreadful sense of isolation. With the blocking, Casademunt tries to create a shapeshifting dynamic between the two central characters. They both are torn apart further as their insecurities grow.

For most genre films, the creature headlines the film. Not ‘The Wasteland’. It is certainly not easy to speculate along with the characters about the beast, though. The ambiguity around the existence of the creature is further heightened by the lack of any definition of it. The contours of its body are vaguely ascertained in the room and outside. We never clearly see it in clear daylight. All we see are shadows and blurry silhouettes. Because of how ‘The Wasteland’ is lighted, the visual language invokes feelings of fright and terror. It might not even be amiss to call the film psychological warfare. Inma Cuesta and Asier Flores share impactful chemistry on screen. There are times when the latter upends the former. He gradually starts to dominate their dynamic, something that is artful and deserving of praise. His character arc of taking the mantle of the patriarch might just be the most important aspect of the film.

There is a lot that could have been done to expand upon the universe and delve into what happened to the outside world. But director David Casademunt remains focused like lasers on deconstructing the state of mind of the protagonists. Admittedly, his creative choice to follow the deterioration of the household wins him my vote. It is more fascinating and sufficiently decrypts for my liking. This choice also differentiates ‘The Wasteland’ from other single-setting movies with better production values and cast. Creating value for the viewers within tested formulas is how new filmmakers contribute to the art form.

One reason why ‘The Wasteland’ is definitely not a mass film, or as accessible to the larger audience is because of its pacing. Casademunt takes his own sweet time, probably becoming too comfortable at times to its own downfall. This significantly adds to the runtime that feels excessively long. Without an intelligible plotline to follow, the narration has the tendency to come off as chaotic or messy. It subverts expectations by becoming a tad too experimental. In an ironic sense, what makes it great, also makes it vulnerable to criticism.