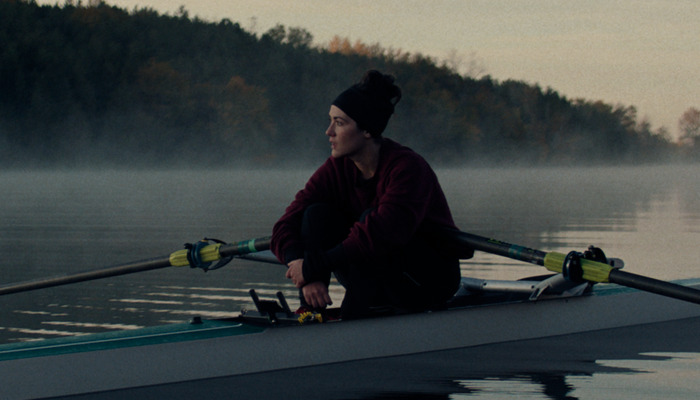 A queer college freshman joins her university’s rowing team and undertakes an obsessive physical and psychological journey to make it to the top varsity boat, no matter the cost.

An overachieving mindset presented through the lens of a psychological thriller yields propulsively intense results and a fiery, obsessive performance from Isabelle Fuhrman in writer and director Lauren Hadaway’s narrative feature debut, The Novice. Intriguingly, that compulsive need for accomplishment is applied to college rowing, a sport dependent on teamwork rather than individual achievements. One could argue that pushing their body to the limit and focusing on personal improvement, times, and growth doesn’t mean much in the grand scheme of things considering the most effective way to win races is to function in synchronicity as cohesive a unit as possible.

Alex Dall (Isabelle Fuhrman, undeniably dedicated and breaking herself mentally and physically in the role) is no ordinary student-athlete. She becomes enamored with understanding the physics of rowing, training, and making individual times impressive enough to earn her spot on the varsity team, so much so that the student part of the equation seemingly threatens to fall off. Except it doesn’t, and that’s because Alex (majoring in physics despite having a hard time with the subject) overworks herself studying and frequently doubles and triple-takes tests until she is absolutely confident she has secured a top-tier grade.

Somehow, Alex occasionally finds time for a social life, although she’s only really pressuring herself to try new experiences out of self-placed obligation. That much couldn’t be any more evident as she engages in a one-night stand just for the hell of it, seemingly unfazed by the insensitive jock she is with disrespecting her wishes for something less rough. Fortunately for Alex, he is not a good fuck anyway and done within 15 seconds (and almost loses his condom to boot), all of which is chalked up as college adventures before getting right back to the rowing grind.

There’s also something much darker boiling inside The Novice as Alex takes her training regiment to the extreme (with the blood and scars on full display), often with sweaty close-ups emphasizing every stressing body maneuver set to a ritualistic voice inside her head, burning the workout plan into her mind (set to an increasingly distressing and harrowing score from Alex Weston that is one of the year’s best). She also refuses to listen to the advice of her coaches on easing up, choosing to continue pushing herself during the off-season.

Given that the team mascot also happens to be a raven, Lauren Hadaway takes advantage of that detail to implement an Edgar Allen Poe reminiscent flavor to the self-inflicted psychological torment, with both audible heartbeats and hallucinations of ravens themselves. Now take Edgar Allen Poe and mashing together with the tone of a Darren Aranofsky horror mind-fuck and replace Whiplash‘s drumming with rowing, and you get a perfect sense of what The Novice is.

While all of this continues to punish Alex in ways that increasingly become hard to watch (and will assuredly be triggering for some), she does form two compelling connections. The first is with fellow rowing athlete Jamie Brill (Amy Forsyth, who recently had a brief but charming supportive turn in the outstanding CODA), practically the only other girl giving the sport her all as she desperately needs the scholarship up for grabs. Naturally, questions arise as to how much of this is a genuine friendship and how much of it is Alex thrilled by having real competition within the team. Also, in one of the weaker subplots, Alex ends up in an undefined romantic dynamic with her teacher’s assistant Dani (Dilone), which mostly seems to exist as a vessel for Alex to dish out exposition regarding her past and what drives her to torturous excellence.

The Novice doesn’t so much provide answers but rather explanations. There’s a sense of why Alex is doing this, and while it might not be relatable, it’s more than enough to empathize with her, hoping she seeks out mental help alongside her success. It’s a bleak story of seemingly impossible levels of drive and ambition, one that gradually shifts from drama into hallucinatory horror. There may be missing pieces and undercooked elements within the narrative itself, but Isabelle Furman is a repeated lightning bolt of momentum, ensuring The Novice reaches the finish line as a confident, rattling debut.