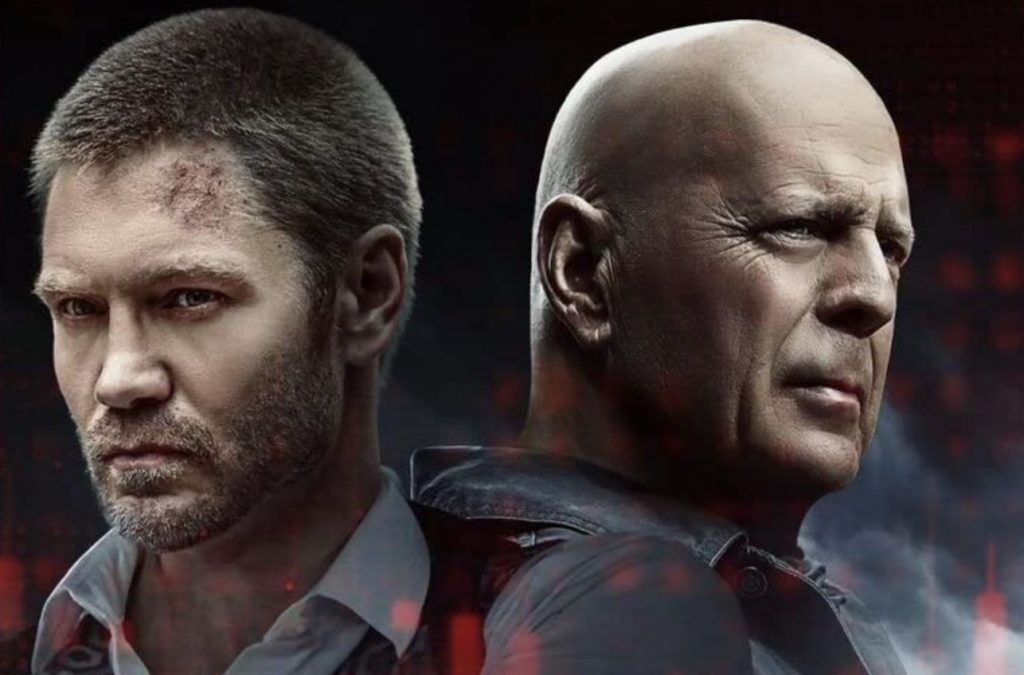 If Fortress, the second Bruce Willis (Cosmic Sin, Breach) film to be released this month looks a bit familiar there’s a reason for that. It reunites Willis not only with Survive the Game’s director James Cullen Bressack (Hate Crime, Alone) but with co-star Chad Michael Murray (Camp Cold Brook, Survive the Night) and supporting cast members Michael Sirow (Out of Death, Jeepers Creepers 3), Canyon Prince (Battle Star Wars, Run Like Hell) and Simon Phillips (The Survivalist, The Nights Before Christmas). Given that was one of his better recent films, dare we hope it’s a good omen?

This time out Willis plays Robert, an ex-CIA agent living in a hidden woodland resort that serves as a retirement community for former spies. His estranged son Paul (Jesse Metcalfe, Dead Rising: Watchtower, Escape Plan 2: Hades) is a cryptocurrency entrepreneur who has run into trouble and needs to ask his old man for help.

Unfortunately, his plans aren’t as secret as his father’s location and he’s being tracked by Balzary (Chad Michael Murray) who has a score to settle with Robert. And aided by Ulysses (Ser’Darius Blain, Bolden, Footloose) and his mercs he plans to get it.

Writer Alan Horsnail (Midnight in the Switchgrass) seems to have envisioned Fortress’ setting as a more friendly version of The Village from The Prisoner, but the implementation of it on screen is a bit confusing. There’s some kind of high-tech cloaking device making it invisible from the air. But on the ground, there’s just a fence and some security cameras. The fence isn’t even electrified, Ulysses and his crew just cut it open and walk in. One would expect such a rich collection of high-value targets to have something a bit stronger.

In case you haven’t guessed, the internal security is just as useless as the perimeter security and father and son have to put the past behind them to save the day. Or at least partially save it since Fortress is part one of a trilogy, the sequel Fortress 2 was shot back to back with it under the direction of Josh Sternfeld (Meskada, Winter Solstice).

Willis actually seems to have put some effort into Fortress. He’s in several locations not just sitting on the same set for all of his scenes. He even makes some attempts at acting and doesn’t just sleepwalk through the entire proceedings. He still sounds uninterested at some very inappropriate times though, such as when he’s explaining to Paul what he used to do and why he wasn’t around while his mother was dying.

As usual, his screen time is limited, but it’s better edited through the film which makes it seem like he’s in it more than he actually is. Fortress’’s other two name cast members, Chad Michael Murray and Shannen Doherty (Blood Lake: Attack of the Killer Lampreys, Charmed) who plays General Dobbs, the facility’s head of security, turn up about halfway through the film.

Billed as an action thriller, Fortress leans a lot more on thriller than action. Most of the heroics consist of what seems to be the facility’s only competent guard playing cat and mouse with the bad guys while everyone else holes up in a well-equipped and fortified bunker. Even then, much of the mayhem takes place off-screen, probably to avoid the cost of extras to use as grenade fodder.

If you can get past the ludicrous lack of security and inept guards Fortress is a reasonably entertaining film that takes a few cues from Live Free or Die Hard. You didn’t think it was a coincidence his son was into cryptocurrency, did you? It’s constrained by the fact it’s a part of a trilogy rather than a stand-alone film, but if you know this going in you can adjust your expectations accordingly. Whether this is going to be worth three films worth of our time is another matter however.

Lionsgate will give Fortress a limited theatrical and VOD release on December 17th. It will be available on Blu-Ray and DVD on December 21st. You can check their website for more information.