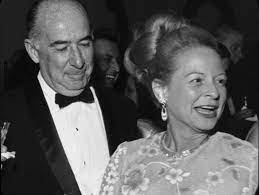 “The Martha Mitchell Effect” is a short documentary film by Netflix on the effect that a cabinet wife, Martha Mitchell, had on US politics in the early 1970s. Although telling an interesting tale of another cover-up amidst a presidency that is perhaps most remembered for cover-ups, ‘The Martha Mitchell Effect’ seems a bit too short without too much delving into the Watergate scandal. Instead, it focuses on the outspoken and frank nature of the woman, and the subsequent effect it has had on her life and those around her.

Richard Nixon’s presidential election win in 1968 was immensely helped by his election campaign manager, John Mitchell. After Nixon took office at the White House in 1969, John left his old job as a lawyer to become the United States Attorney General under the leadership of President Nixon. Martha Mitchell was the wife of John, and she, too, had been a close part of the Nixon presidential campaign and now of the White House. As a cabinet wife, she soon started making public appearances doing social or charity work and then instantly became famous for her frank and revealing comments about social and political issues. Martha initially voiced only Republican opinions. In one instance, she told the press that those advocating violent revolution in the US (against the Vietnam War) should be kicked out of the country. Despite this, President Nixon and his close White House associates were all wary of Martha’s public reputation as a “big mouth.” She had also developed a habit of having a drink in the evening and then calling up journalists and politicians to discuss political gossip, and this soon placed her right at the forefront of media attention. Martha did not seem to mind that either, as she is seen playfully posing with a telephone in a public gathering, and her exceptional ability to stick out as a woman in a political scenario completely run by men was also laudable. Nixon’s dislike, and in many ways, fear, of Martha was not without cause either—in one instance, Martha was asked what she felt about the Vietnam War, and she replied, “It stinks.” Being a part of the Nixon administration, which was still waging war in Southeast Asia, Martha’s frankness and honesty were extremely out of place. She also admitted calling up the President sometimes and joking around with him, saying that the man could never tell when she was joking and when she was serious. The wife of a cabinet member having that sort of an effect on a man who admittedly disliked “loud women,” that too, the President of the country, was definitely something special.

However, trouble started to brew when John Mitchell was appointed leader of a fund-raising organization for Nixon’s re-election campaign, called the Committee to Re-Elect the President, mockingly shortened as CREEP. Martha was naturally involved with it as well, despite Nixon’s being cautious of her, as was now evident from the President’s mention of her in the secret audiotapes of conversations that he recorded in his White House office. Martha’s first major point of dislike, as she said to journalists later, was that she had been forced to go to California with her husband for a fundraiser without her wanting to do so. On the night of June 17th, during this trip, five men were arrested at gunpoint for breaking into the Democratic National Committee’s headquarters in Washington’s Watergate complex and installing eavesdropping equipment in the offices. This break-in was very quickly linked to the Republican Party and directly to President Nixon’s re-election committee, as one of the perpetrators, James McCord, was also a consultant to the committee. Having received news of this arrest, John Mitchell immediately left California for Washington, but he left Martha behind, and he ordered her to be kept in the dark about the incident. However, Martha did get to know of the Watergate break-in and also McCord’s involvement in it (who had also been the security guard for her daughter), and she was quite furious about the whole thing as she had no idea of such a plan. She called up some politicians and press members and was talking to a journalist when her husband’s bodyguards came into the room and detained her, also ripping the phone connection apart. A doctor, on-call at the hotel, was instructed to inject Martha with sedatives and tranquilizers in order to calm her down and keep her in check. Realizing that she had been purposefully removed from Washington before the break-in so that she could not raise her voice against it, Martha now tried her best to let it be known to the public how she was being kept a prisoner in California.

With Martha now directly calling out the White House administration and talking about their “dirty tricks,” the Nixon team decided that it would be best to let John Mitchell out of the campaign director role, stating that his wife was sick. Soon, reports from the White House started coming out about the apparent mental and physical illness of Martha Mitchell, indirectly stating all her claims about the Watergate scandal as fake and delusional. John left the White House soon after, saying that he needed to take care of his sick wife. Martha’s stories and accounts of her being held captive seemed too fanciful even for opposition and Democratic supporters, and mostly spoof campaigns were run calling for Martha’s freedom as a joke. Overall, hardly anyone believed what Martha was now saying about her being held captive and about the Nixon government’s direct involvement in the Watergate scandal. While the matter settled down for the time being in 1972 as Nixon was re-elected President, the real meltdown began in 1973, when McCord told the court and the Senate committee that there was much more to be said about the incident. He claimed that John Mitchell had full knowledge and understanding of the plan and had also given approval for it. John was now a normal citizen living his life away from the White House or President Nixon, but his wife feared that all this revelation would bring slander against him. Claiming John to be totally innocent about the matter, Martha now started opening up to journalists and renowned press houses, saying that her husband was being merely framed by the President and his associates for the incident.

Friends close to Martha Mitchell at the time, stated that she did indeed believe that John was being framed in the matter and had actually no idea about the Watergate break-in. She now insisted that Richard Nixon should resign, having won the election unfairly, and also tried to convince John to leave the President’s side, as he would also be arrested along with Nixon. However, what followed was John leaving his wife and telling his friends that she was a sick and disturbed woman. The man had chosen to side with and protect the President rather than his wife, who was trying to protect him. But with political tension greatly growing against the Nixon administration, all the recorded audiotapes from the White House had to be given to the investigation committee, and this revealed that Nixon, John, and the entire team were not only aware of the Watergate incident from before, but John Mitchell himself had played a part in coming up with the narrative to feed the press that Martha was sick and that he should resign to take care of her. As a result of the investigative findings, John Mitchell was sentenced to thirty years in prison for conspiracy, obstruction of justice, and perjury. It is assumed that John had expected Nixon to pardon him and the other associates of the crime, but with the pressure of impeachment against Nixon himself, the President fled the scene, resigning from the presidency in 1974.

After the entire Watergate Scandal was out in public with the direct involvement of Richard Nixon and his administration, the press and the country owed an apology to Martha Mitchell. Whatever the woman had been saying for so long turned out to be exactly true, and the press majorly picked up the story, with numerous radio, TV, and newspaper interviews conducted all over. Her estranged husband, John Mitchell, was now about to be imprisoned, and when asked about the matter, his reply was that this outcome was better than having to spend his life with Martha. A man’s ego perhaps finds it more pleasing to accept criminal charges than to accept that a woman’s suspicions were correct. However, Martha’s financial condition worsened in 1975, as she was fighting a court case for an alimony dispute and now had to work at cloth stores. Furthermore, she also suffered from a terminal malignant blood disease, and the woman cut off contact with most of her friends. She did apparently wish to be visited by John, but he refused to do so.

In May of 1976, Martha Mitchell passed away from the disease, and many of her supporters gathered to pay respect at her funeral. John Mitchell was also present, as he was still Martha’s legal husband. Many more admirers had sent in flowers, and one anonymous donor had sent a large bouquet with the flowers arranged to read: “Martha was Right.” This itself became the aptest statement for Martha and the situation she had to face. In 1988, a Harvard psychologist named Brendan Maher coined the term “The Martha Mitchell Effect,” which describes a situation where a person’s beliefs and suspicions are initially labeled as delusional, but they ultimately turn out to be true.