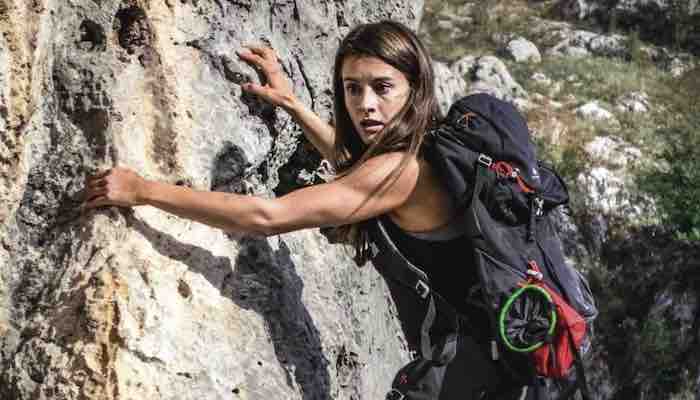 A rock climbing adventure between two friends turns into a terrifying nightmare. After Kelly (Brittany Ashworth) captures the murder of her best friend on camera, she becomes the next target of a tight-knit group of friends who will stop at nothing to destroy the evidence and anyone in their way. Desperate for her safety, she begins a treacherous climb up a mountain cliff and her survival instincts are put to the test when she becomes trapped with the killers just 20 feet away.

After all this time spent dealing with the pandemic, lots of people are looking to get out and about again – safely, that is. A climbing trip means lots of fresh air and some time in nature. Except, in the case of horror thriller The Ledge, it also means terror and threat. We’ve got an exclusive look at both the trailer and poster for you, so hold your breath and take a look.

Having retired to bed early to prepare for a dawn mountain ascent, Kelly (Brittany Ashworth) is woken by the screams of her friend Sophie, who had stayed up with a group of men they had met earlier. Desperate to get to her friend, Kelly runs deep into the forest using her GoPro to guide the way.

She arrives just in time to see Sophie’s lifeless body being thrown over a ledge, a horror she captures on camera. Terrified, Kelly finds herself in a free-climbing chase up a freezing mountain, pursued by the group of murderous men after the evidence.

If she’s to escape this deadly game of cat and mouse she must dig deep, do all she can to survive, and climb.