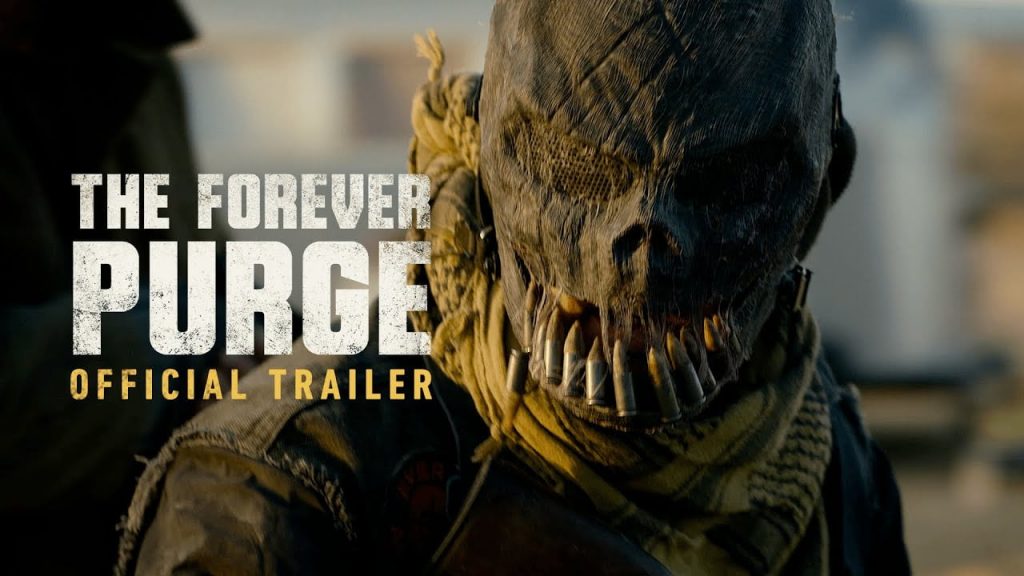 Never put too much faith in claims that a moneymaking franchise is over. But the underwhelming Purge series will end on a high note if it goes out with Everardo Gout’s The Forever Purge, a satisfying action pic that finally realizes the potential of its pulp-meets-sociopolitics conceit. Set on the Texas side of the border with Mexico, it lets creator James DeMonaco’s imagined scenario of government-sanctioned violence play out where, in real life, arbitrary borders become physical walls and a fetish for gun rights amplifies the dangers of being an unwelcome visitor.

Gout, a Mexican director who drew some attention with 2015’s Days of Grace and has toiled since then on TV, brings to the series not just his personal experiences but more filmmaking intelligence than DeMonaco showed when directing the first three installments. (DeMonaco wrote this one, as he did its predecessor, which was directed by Gerard McMurray.)

His film needn’t work to see the humanity in the two undocumented immigrants at the story’s heart, Adela and Juan, who thanks to Ana de la Reguera and Tenoch Huerta are more than stock characters produced by America’s guilty-conscience imagination. We first see them as they flee cartel violence through a tunnel under the border, but the husband and wife have settled in when the story begins: She supervises more recent refugees in a slaughterhouse; he uses his horse-training gifts on a ranch owned by the well-off Tucker clan.

Decent people on the whole, the Tuckers are certainly not fans of the Purge, the annual holiday of lawlessness that was cancelled when the hero of Election Year became President. In the time since then, she was toppled by a resurgent New Founding Fathers, who immediately announced the Purge would return. But during the reformer’s tenure, the Right grew more deranged, planning to break free from Washington’s control and make the Purge a permanent state of affairs. Insert your own observations re Trumpism, January 6 and QAnon here.

Still, the Tuckers aren’t perfect examples of tolerance. Son Dylan (Josh Lucas) is uncomfortable with and sometimes nasty to the immigrants around him; father Caleb (Will Patton), who has no such difficulties, regrets that his efforts to raise a proud American produced this result. (Poor Patton is the recipient of DeMonaco’s most on-the-nose dialogue, and Caleb’s sincerity elicits chuckles more than once. But Patton and Lucas rise above the script and are believable as West Texans.)

Things go smoothly on the night of the newly-revived Purge. But as the security shutters rise on the morning after, our heroes find coordinated attacks. Embittered ranch hands want to kick the Tuckers off their land, a “switcheroo” happening all across the region. Trucks emblazoned with “Purge Purification” coast through streets menacingly. Their loudspeakers announce that their drivers are “the real patriots” and inform non-whites, “we will find you and disinfect you.”

Well-orchestrated action scenes throw the Tuckers (including Dylan’s very pregnant wife) in with Juan, attempting to stay alive while he finds Adela. (Adela has been scooped up by police, a perfectly infuriating capper to perhaps the most frightening sequence in all the Purge movies.) Piled into the oversize cab of a trailer-free tractor, they flee toward El Paso, hoping to escape to Mexico. (In an irony borrowed from The Day After Tomorrow, American refugees must now rely on open borders.)

Gout moves things along urgently, focused more on his heroes’ teamwork than on the lurid racists pursuing them. As dystopia unfolds, Juan and Adela lead the Tuckers toward an underground support network formed long before the New Founding Fathers came to power — back when this was plain-old America, already a plenty-risky place to be poor, undocumented or non-white.