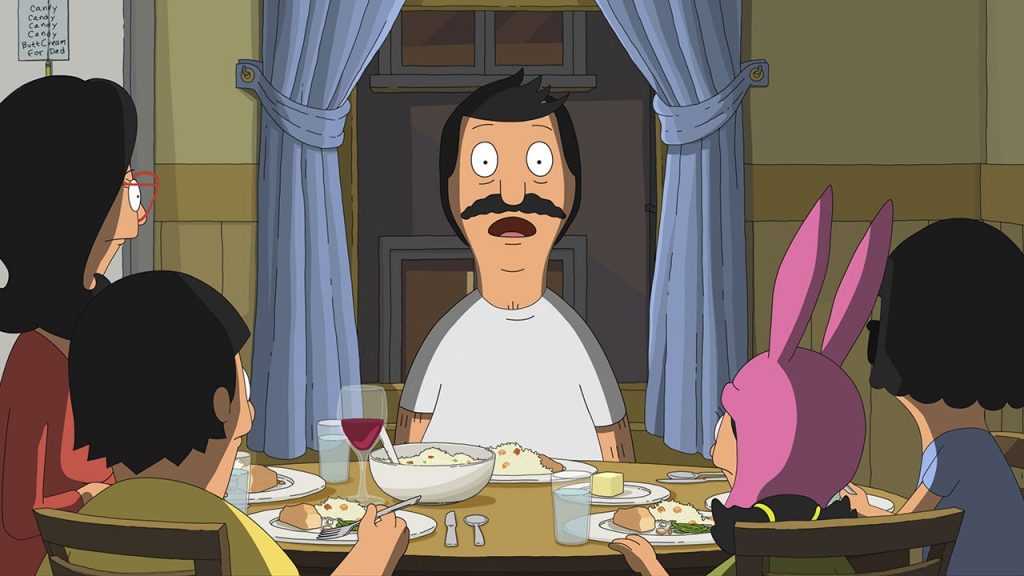 “The Bob’s Burgers Movie” knows its recipe and sticks to it. For 12 seasons, show creator Loren Bouchard, who here co-helms with longtime producer and supervising director Bernard Derriman, has served up the cartoon sitcom antics of the daffy, working-class Belcher family who live in an unnamed town with the vibe of Pittsburgh-by-the-Sea. Hijinks hinge on their countertop diner and a few fixations that the family obsesses over like beloved worry dolls: father Bob (H. Jon Benjamin) frets about their finances, pubescent daughter Tina (Dan Mintz) drools over boys, middle child Gene (Eugene Mirman) hypes his band, The Itty Bitty Ditty Committee, and 9-year-old Louise (Kristen Schaal) cherishes her pink bunny hat. Meanwhile, mom Linda (John Roberts) cheerleads with lunatic optimism.

The comedy comes from how the five share space while sharing little else in common, besides a way of speaking in upbeat one-liners that demand a double take. In this world, even newly landed aliens talk in semi-apologetic surrealisms. “I’m not saying we’ll destroy your planet,” a space robot says here, “but it’s not, like, off the table.”

This debut feature has the same feel of the TV show at four times the length. Bouchard’s script, co-written with Jim Dauterive and Nora Smith, isn’t going to bend the characters’ reality and finagle an excuse to send them to Paris, or even Wally World. Not when Wonder Wharf, a tatty carnival at the end of the Belchers’ block, is celebrating it’s Octa-Wharfiversary. (“80 years of cheap thrills and no decapitations!”) Instead, the film reaches for a plot older than the hamburger itself. The Belchers have seven days to raise money to pay the bank, or else they’ve served their last sandwich — a threat that inspires Bob to add a thematic burger to the chalkboard, the “Crying All the Thyme.”

The kids are kid-like enough that their parents’ financial woes only faintly register. Instead, they skip school to solve the murder of a wharf employee named Cotton Candy Dan, an adventure that takes them on a frightening detour to an even more cash-strapped neighborhood called Carneyopolis, where weary, tatted workers make threats and burst into song. (The numbers by Bouchard and Smith have a giddy zing that shuns the usual big ballad glop.)

Nothing in here makes an argument to be on the big screen. But it’s darned delightful, like a fizzy soda on a hot day. In an attempt to make itself screen-sized, the story gives major time to characters voiced by the biggest movie stars in the cast: Kevin Kline and Zach Galifianakis as the Belchers’ rich and shiftless landlord Calvin Fischoeder and his even more ne’er-do-well brother Felix. It comes off like a nod to the crisis of overpriced retail rents, which has turned thriving neighborhoods of Manhattan into a wasteland of Duane Reades, that the building next door, which has forever continually re-opened with punny new stores like Little Shop of Hulas and Gloves Actually, is here conspicuousness un-occupied.

“The Bob’s Burgers Movie” is also remarkable in what it abandons. Let other movies chase photo-realistic animation. It remains stubbornly 2D as if to prove that looks matter less than jokes that come fast and friendly like a parade of puppies. And while there’s slight moments of emotional recognition — among them, Linda’s acknowledgement that it can be exhausting flogging a smile — it’s a relief that none of them congeal into a life lesson. Lately, most cartoons accost audiences with a therapy session, or a primer on the ABCS of global fascism. The next time we see the Belcher family, they’ll probably be agonizing over the exact same nonsense. Thank heaven. Sometimes you just want a simple snack of meat and cheese.