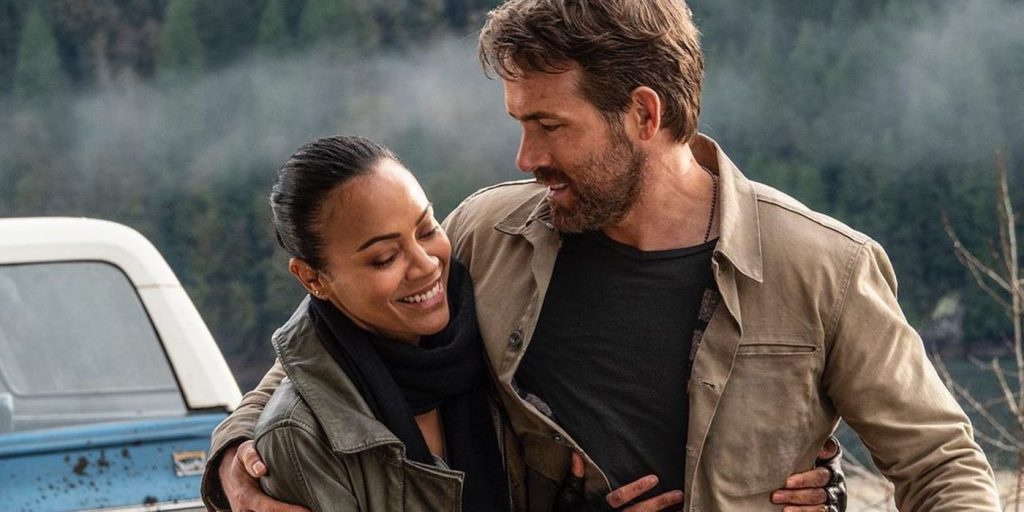 Greetings again from the darkness. At a certain age, most of us have given some thought to what we might say to our younger self if we had the opportunity to go back in time. The familiar phrase goes, “Hindsight is 20/20”, but what if we had foresight? What if we knew the best choices to make, and the bad decisions to avoid? Director Shawn Levy (the “Night at the Museum” franchise) reunites with his FREE GUY (2021) actor, Ryan Reynolds, to bring us a crowd-pleasing time travel movie with a personal twist. The script was co-written by Jonathan Tropper (“Banshee” creator), TS Nowlin (“The Maze Runner” franchise), and Jennifer Flackett (“Big Mouth”).

Twelve-year-old Adam (Walker Scobell in his first film) is the kind of wisecracking kid that attracts bullies at school. He lives with his mother (Jennifer Garner), and they are both still mourning his dad who died in a car crash. Ms. Garner is saddled with the film’s most obvious line when she lectures young Adam, “… the future is coming sooner than you think.” When adolescent Adam stumbles on an injured astronaut in the garage, it takes a while before he figures out that it’s actually his own self from the future (2050 vs 2022). When you have a wisecracking 12-year-old, it’s only perfect casting to have wisecracking master Ryan Reynolds play the older version. Despite some early friction, or maybe because of it, the two enjoy playing off each other with snappy one-liners and comebacks.

As with most time travel stories, things get a bit complicated, and the only solution involves taking a bigger risk and adding more complications. Not to give anything away, but the two Adams are forced to make a joint time-jump to find dear old dad, Professor Louis Reed (Mark Ruffalo). The purpose is not to save dad’s life, but for other personal reasons that involve Zoe Saldana as Laura, and Catherine Keener (miscast as the villain) as Maya, Professor Reed’s not so ethical business partner. It’s this section that offers the most action and tension, although the film is best delivering for the audience when the wisecracks are flying between Reynolds, Ruffalo, and Scobell).

Director Levy has constructed a charming film that proves quite entertaining for mainstream audiences, and he adds little touches like a family dog named Hawking, and classic rock from Led Zeppelin, Spencer Davis Group, Boston, and Pete Townsend. He even avoids the temptation to add a line of dialogue, “Hey Dad, wanna have a catch?” Outside of one sequence, the special effects are minimal considering it’s a time travel movie, and at its heart, it’s a story about coming to grips with family and who you are as a person.