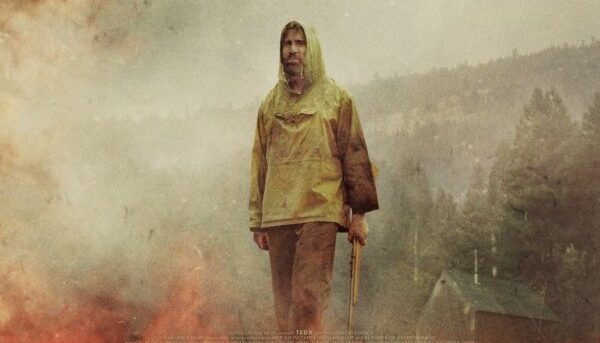 From the brilliant mind of acclaimed director Tony Stone comes TED K-  a bracing, cinematic journey into the tortured mind of The Unabomber. Deep in the American Rocky Mountains lived a man who sought refuge from modern society. His dark writings forewarned of a society ruled by technology. As the outside world encroached on his mountain sanctuary, he slowly became radicalized with rage. What began with small acts of sabotage, culminated with deadly bomb attacks, national media attention, and the largest manhunt in American history.

Review: Anyone who grew up in the 1990s is familiar with The Unabomber. The terrorist killed a handful of people, but the fact that his bombs were sent through the mail and could show up anywhere kept the United States on edge for years. Since being captured, the mind of Ted Kaczynski has been fodder for documentaries and several television films and series. All of them have focused on the madness of Kaczynski or the massive manhunt by the FBI that led to his dramatic capture, but few have delved into the man behind it all. Filmmaker Tony Stone’s new movie, Ted K, does just that in a beautifully shot and sometimes surreal exploration of Ted Kaczynski.

Filmed on location in Lincoln, Montana where Kaczynski lived during his reign of terror, Tony Stone makes exquisite use of the natural landscapes that inspired the manifesto of The Unabomber. From the opening title sequence showing a family on snowmobiles disrupting the natural order while Kaczynski looks on, Ted K presents itself as a portrait of a broken mind. Sharlto Copley provides voice-over narration throughout the film quoting Kaczynski’s writing verbatim which is a chilling reminder of the hundreds of thousands of pages he wrote while isolated in the wilderness. Copley, who is in every scene of Ted K and often by himself, evokes the mannerisms, voice, and even the posture of Kaczynski. Most other actors have not gone to such a length but Copley fully inhabits this character to a level reminiscent of Joaquin Phoenix in Joker. Sharlto Copley evokes many elements of Asperger’s syndrome or other autistic tendencies but never to the point of caricature.

Ted K features a heavily naturalistic look that makes great use of natural lighting and an almost documentary feel to it. And while this is first and foremost a drama, it lyrically weaves in dreamlike elements including a stunning sequence involving Ted’s cabin and a truck. Because Tony Stone shifts between reality and these strange visions, it replicates what it must have been like inside of Kaczynski’s mind. The entirety of this film is haunting and unsettling, especially when it depicts the victims of the Unabomber’s deliveries. These are never shown for gratuitous violence but instead accent Ted’s skewed look at the world. In several scenes, we see Ted calling his brother and mother and sharing with them calmly while later calls are abrupt and full of rage. The constant mood shifts further illustrate Kaczynski’s mental instability.

Keep in mind that this film is by no means a biopic or a documentary but instead focuses on Kaczynski’s years in self-imposed isolation. Sharlto Copley is a very talented actor and really treads the line between making Ted a sympathetic character and a monster. We see him brimming with confidence in one scene and shy in the next. It is very unsettling not knowing how he will react and as we have become trained by films like Joker, Taxi Driver, and more, Ted K often seems like he could murder someone before shrinking back to his cabin. Ted is clearly a very unhappy human being and this film never tries to convince us otherwise. For two hours, we are able to get a glimpse of who this man was based entirely on his own words and thoughts. It is disturbing but also very engrossing.

With music videos, short films, and documentaries to his credit, Tony Stone’s feature film directorial debut is indicative of a very intriguing future from the filmmaker. Coupled with the cinematography by Nathan Corbin, Stone finds a solid partnership with Sharlto Copley (who also serves as a producer). Together, they have taken a unique approach to adapting the writing of a living person and turning it into something beautiful. It also should be noted that the score by British musician Blanck Mass is already securing a spot in my best of 2022 list. The opening scene of Ted K will immediately put you on edge with a pulsing and grand theme that gave me chills. Even if you are not as impressed by this film as I am, the music will blow you away.

Ted K is a challenging movie that is not quite what I expected and I am very happy to say that. Just when you begin to find your rhythm with the story, it changes directions on you. Spanning decades in just two hours is tough but this movie manages to still feel like it has a lot more to say. The attention to detail is also very impressive. Google any photographs from Kaczynski’s capture by the FBI and compare them to what takes place in this film and it matches down to the rips in Ted’s pants. This is a movie that is as haunting as it is beautiful and altered my perception of who Ted Kaczynski is. The scariest takeaway from this film is not that Ted is a monster but instead that he is just a man and that makes what he did all the more horrifying.