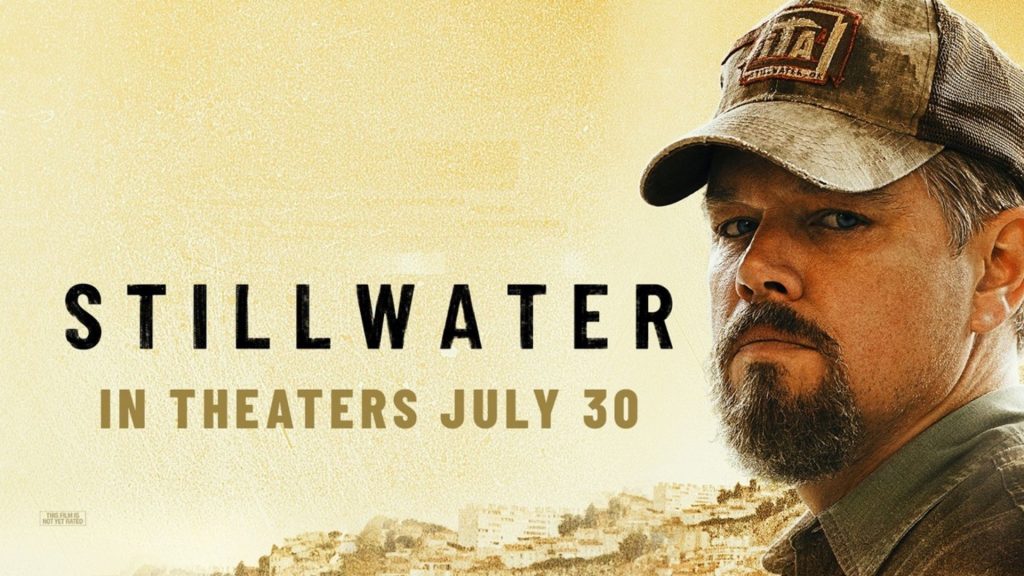 Perhaps surprisingly, Stillwater is not a straight-to-streaming film about a killer shark terrorising a sleepy fishing village or a faux rockumentary about Billy Crudup’s band in Almost Famous. Instead, Tom McCarthy’s first foray into adult filmmaking since the Oscar-winning Spotlight delivers two films for the price of one. It starts as a tough-ish dad-on-a-mission movie, before morphing into a relationship drama and then back again. If it never completely integrates its genre choices, Stillwater is still the kind of mid-budget grown-up movie that Hollywood supposedly doesn’t make anymore. Originally planned for Awards season 2020 — instead it’s bowed at Cannes — it delivers a mostly entertaining, if overlong thriller-drama (thrama?).

The father-possessed aspect sees Matt Damon’s Bill Baker, an oil driller from Stillwater, Oklahoma (the title has another significance), who crosses the pond to visit his daughter Allison (Abigail Breslin) in a Marseille prison. Charged with murdering her girlfriend Lina, Amanda has run out of legal options and gives Bill a letter that may represent a way to re-examine the case. When Bill runs up against hardnosed French judges, he takes matters into his own hands, seeking out detectives and DNA tests, talking to witnesses and chasing down suspects. If it sounds like Liam Neeson territory, it’s played on a much more human scale — there are dead ends and realistic fist fights — and the plot points are filtered through the estranged (but not particularly gripping) relationship between Bill and Allison, played out in snatched prison visits.

Bill is helped on his quest by theatre actor Virginie (Call My Agent! breakout Camille Cottin) and, around halfway through, Stillwater shifts gear. At this point, McCarthy becomes much more interested in Bill finding a new lease of life with Virginie and her eight-year-old daughter, Maya (Lilou Siauvaud). There are interesting dynamics at play here as the God-fearing, gun-loving (a shotgun and a Glock) American tries to find common ground with a liberal French thesp (“What am I going to do in a fucking theatre?” Bill says at one point), Damon, Cottin (excellent) and young Siauvaud creating a warm, inviting chemistry that makes the potentially convenient relationship convincing.

Co-screenwriter Thomas Bidegain is a frequent collaborator of Jacques Audiard and Stillwater tries but doesn’t always succeed in channelling the French filmmaker’s mixture of character study and genre licks — the concentration on family drama dissipates the momentum of the investigation, and some of the thriller tropes feel a contrivance amidst well-observed, intimate moments. Still, McCarthy’s filmmaking is confident, the Marseille setting feels fresh, and the end goes to a different, interesting place. The whole thing is solidly anchored by Damon, who is believable as a taciturn man, dealing with regret over his existing relationships while tentatively forming new ones, discovering tenderness and a different way of living. Amidst the procedures and the punch-ups, he makes Stillwater worthwhile.