Stand Out: An LGBTQ+ Celebration 2022 Movie Review
Skip to content 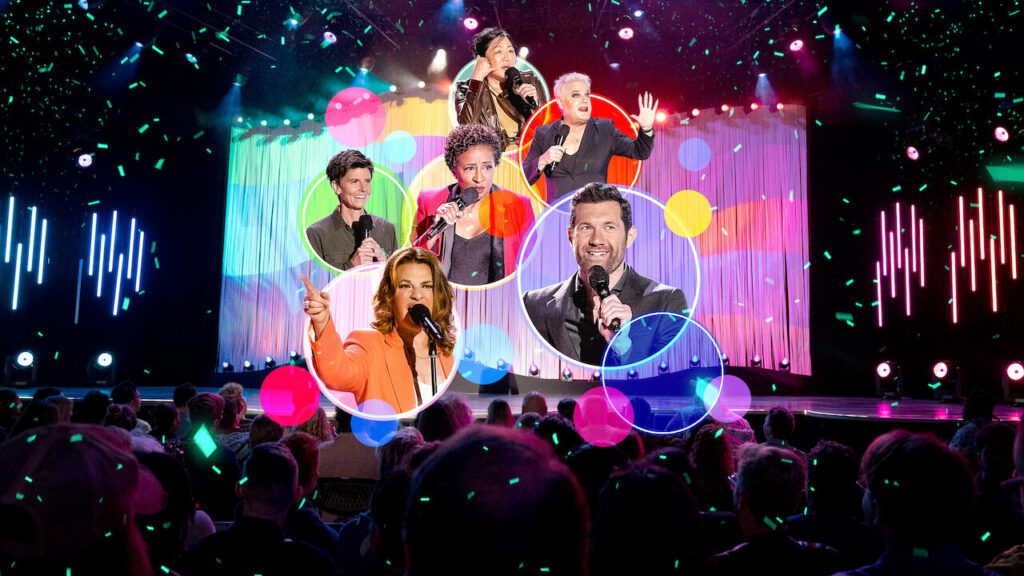 Billy Eichner, with an assist from Bob the Drag Queen, presided over this cavalcade of queer comedians at The Greek Theatre, with introductions from Ani DiFranco, Sarah Paulson and Lily Tomlin live onstage, plus filmed introductions from Stephen Fry and Billy Porter.

If you didn’t happen to count the number of performers in this special, there were at least 26 different people to include within 96 minutes. Divided equally, that would have given a little more than three-and-a-half minutes for each person to enjoy a moment in the spotlight.

And just think, if they hadn’t done so much editing for the transitions, it easily could have and did stretch much longer into the night for those in attendance at the live taping. But the special doesn’t drag. Pardon the pun?

Stylistically, the camera often cut to a wide shot where we see what the live audience saw, including a large video screen to the side of the stage offering a different angle of the performer on it. And the lineup as presented to us offered a variety of perspectives to truly showcase the LGBTQ+ comedy community as being united in spirit, while providing a multitude of opinions and comedic viewpoints.

And if you felt like you needed to know more about these performers and this comedy community, then at least there’s news from Netflix coming out the day of the special’s release of a companion film, to be called Stand Out: The Documentary. The forthcoming doc examines the history of LGBTQ+ comedy, along with interviews and covering themes and trends, including how these comedians have helped change mainstream opinions on civil rights.

During his introductory remarks for this special, Eichner cast the LGBTQ+ community in stark contrast to the events at the Oscars or the Hollywood Bowl, saying: “We are sophisticated. We are chic. And we are above all that nonsense, right? So let’s please hold ourselves to a higher standard.” To that higher standard, Stand Out succeeds greatly as a celebration, even if it sometimes falls short as a comedy special by the very nature of the format.

As great as it may be to see all of these great comedians repping the LGBTQ+ community, it’s less comforting to think that Netflix gives most of them 2-5 minutes compared to giving a single transphobic comedian 60 minutes to make jokes at their expense. And get paid a lot more to do it.

And yet, hopefully seeing so many LGBTQ+ comedians in one place at one time not only reminds you that they’re queer, they’re here and we’ve best gotten used to it, but also that you’ll want to discover more about your favorite performers from the special. Perhaps it’s Joel Kim Booster, who has his own hour debuting later this month on Netflix. Or Sam Jay’s Netflix special and HBO Max series. Or Martin’s Netflix special. Or any of the classic specials from Izzard, Tomlin, Sykes, Notaro, or whomever you enjoyed.