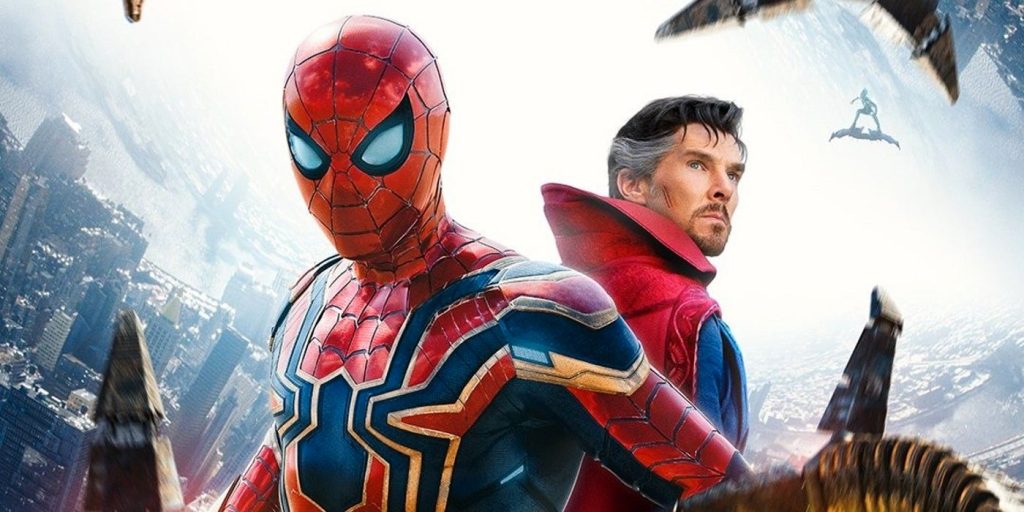 Trying to write a spoiler-free review of Spider-Man: No Way Home is like trying to craft a restaurant review while being barred from mentioning any ingredient other than salt. The flavor of Tom Holland’s third standalone outing as the MCU’s Peter Parker lives and dies on its surprises; it’s less a “movie” than it is a series of capital-letter Moments, designed from the ground up to be relived for years to come in those hidden-cell phone Youtube clips of audiences losing their minds in the aisles of an AMC. Rest assured, the Moments promised by the trailers are in there, as well as a few more Moments you’re maybe already expecting, plus a dozen or so legitimately surprising Moments nobody could have guessed. It’s all thrilling in the same way the sudden drop on a roller-coaster makes your stomach flutter, brief and weightless, because after 13 years and 26 feature films Marvel Studios is kind of unbeatable at manufacturing that specific brand of shared movie theater euphoria. The MCU remains undefeated at making Moments. But is it good at making movies? No Way Home swings that question into even dicier territory, especially when it’s got a cast this talented and the core of a classic Spider-Man story this emotional being pulled in every direction possible by the multiverse.

Right, the Multiverse. Possibly even one of madness. It isn’t fair to say the set-up in this film doesn’t matter, but it does feel like the movie itself is bored with motions it has to sweat through to get to the part where Alfred Molina’s Doctor Octopus clanks his way back into the Marvel Universe. The part where Peter is accused of Quentin Beck’s (Jake Gyllenhaal) murder? Basically hand-waved away quicker than anyone could’ve predicted. Peter asking Doctor Strange (Benedict Cumberbatch) to perform a spell on the entire human race to make them forget Spider-Man’s real identity? Sure, he’ll do it, Strange and Spider-Man have had at least 1-2 meaningful on-screen interactions. What matters is that the spell is botched and reality is torn open just enough to allow in characters you recognize from previous Spider-Man films, namely Molina’s Doc Ock, Willem Dafoe’s Green Goblin, Jamie Foxx’s Electro, Rhys Ifan’s Lizard, and Thomas Haden Church’s Sandman.

Look, I’m not going to say it isn’t a dang blast just to see these actors return to these roles in the year of our lord 2021. I’m a human being with a soul and nostalgic memories of Chad Kroeger’s “Hero” dancing around my head like the rest of you. Sometimes Alfred Molina chucking several cars at Tom Holland is, in fact, all you need. If the one thing you’re looking for from Spider-Man: No Way Home is a trip down memory lane, it will quite literally be impossible to harsh your buzz. Dafoe, especially, makes the most of his reprisal. It certainly helps that Willem Dafoe, face frighteningly rubbery as ever, is one of our greatest living performers; director Jon Watts really lets the actor play around in the murky Jekyll & Hyde layers between “Green Goblin” and the “Norman Osborn” still trapped inside that pointy emerald head in ways even the Sam Raimi films wouldn’t allow, and the result is a tasty bit of comic book camp.

But the threads weaving together all those bombastic set-pieces and surprise cameos—exciting as they are, loud as the in-theater pop will be—are so thin, you start to notice the table-setting to a distracting degree. Almost none of the returning villains feel like live-in characters anymore; they’re just avatars who stand still until it’s time to do their next Big, Loud Thing, existing only to be recognizable. This is especially true in the cases of Lizard, 99% a personality-free CGI presence indistinguishable from every other CGI comic book monster, and Electro, who Jamie Foxx has decided to strip of every defining character trait other than the fact he is played by Jamie Foxx. Eventually, even the nostalgia drips away, and you realize the multiverse is mostly just too crowded for anything to actually breathe.

Which is the real shame, because every aspect of No Way Home that hones in specifically on the story of Peter Parker is fantastic, led by a never-been-better Tom Holland. There’s a truth at the center of this movie that’s true of every great Spider-Man story, that the character is primarily defined by his response to unthinkable loss, to monumental tragedy. “With great power comes great responsibility” only hits home if Peter gets a glimpse at the darker side of the equation, at how easily his power could be corrupted. Holland gets to sell rage in a way we’ve never seen from him, which almost singlehandedly justifies the MCU’s decision to portray its Spider-Man as more childishly naive than bookishly smart. Here, when we see the character both break down and grow up, it is genuinely jarring. Even as the film adds more characters, Peter, Ned (Jacob Batalon, extremely charming), and MJ (Zendaya, amazing) remain its beating heart, and all the extra bells and whistles mostly drown that out.

Again, all of the details left out of this review could fill their own Multiverse. Surprises, call-backs, small character beats that pack an emotional wallop, one significant ehhhhhhhh story decision that brings to mind comic book storytelling’s worst tendencies. It’s all there, good, bad, and in-between. But No Way Home itself is pretty clear on this point: Getting exactly what you wished can be a sloppy deal indeed.