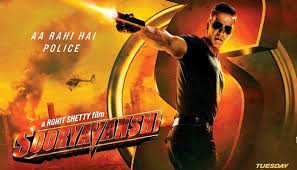 Rohit Shetty’s film Sooryavanshi which was to be released in theaters last year on 24 March 2020 but due to Covid Pandemic its date was extended to 30 April but after that due to second wave of Corona its date was again extended. It was done and now giving the final date, the film will be released on this Diwali i.e. on 5th November.

Akshay Kumar, Ajay Devgan and Ranveer Singh will be seen together in a film for the first time. After a long gap, a Multi Stars Action Film has come to Bollywood. For which the fans were waiting for almost 2 years.

If we talk about the story line, then you will not get to see anything special in it. In the film, Veer Sooryavanshi (Akshay) is the head of the Mumbai Anti-terrorism Squade. Further, Inspector Sangram Bhalerao (Ranveer) and Banjirao Singham (Ajay) join his team to stop the terrorist attack in Mumbai. In the film, Jackie Shroff will be seen playing a dangerous character, he is seen playing the role of Lashkar Khan. Which is shown in the film as Main Villain.

We have seen such movies many times in the past which also includes blockbuster movies like Akshay Kumar’s Holiday. Since this is a Multi Star Movie, then its hype is much more in the audience. However, we hope that you watch the movie once by yourself and definitely give it a rating.

Talking about acting, almost everyone has done their characters very well, now whether you talk about Akshay Kumar’s Ajay Devgan or Ranveer Singh, katrina, Jackie Shroff, all these are well-known actors, on the basis of acting, we can make the movie. give. All the actors have done the work of putting life in the movie because of their acting.

The action scenes of the film are exactly the same as they are happening in Rohit Shetty’s movies.

Sooryavanshi is an action film directed by Rohit Shetty and produced by Reliance Entertainment, Rohit Shetty Picturez and Dharma Productions. This film is written by Yunus Sajawal, Farhad Samji. It was to be released last year on 24 March i.e. Eid but due to Pandemic it could not be done, so now it has been released as Diwali Par Release of 2021.