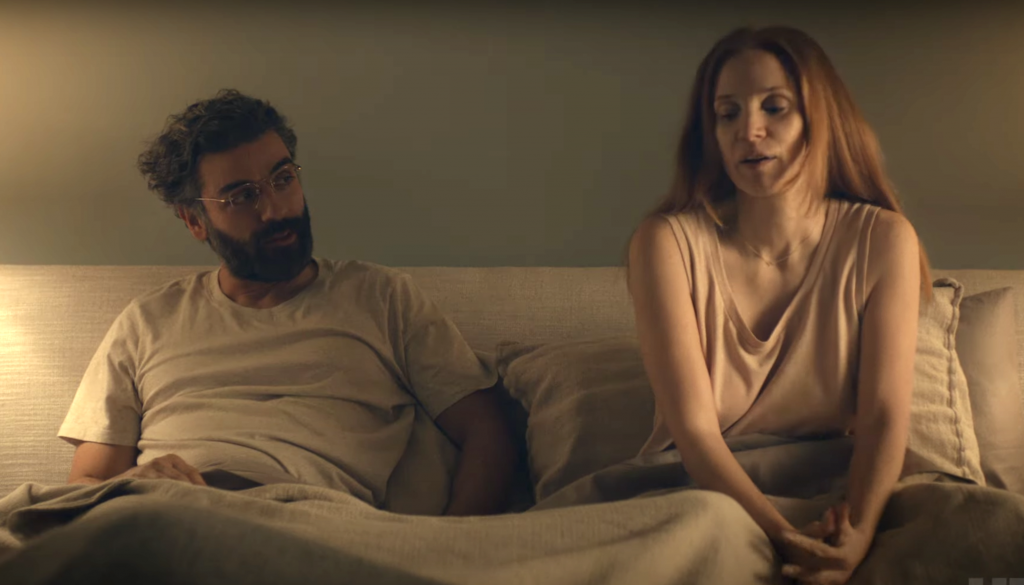 Adapted from the Ingmar Bergman Swedish miniseries by the same name, Scenes from a Marriage is written and directed by Hagai Levi (Our Boys, The Affair) and stars Academy Award nominee Jessica Chastain (Zero Dark Thirty) and Oscar Isaac (Ex-Machina, Inside Llewyn Davis). This contemporary take on the iconic series injects a refreshed perspective into its exploration of love and resentment, devotion and betrayal, and desire and marriage.

Jessica Chastain plays Mira, an ambitious tech executive, alongside Oscar Isaac as Mira’s husband Jonathan, a philosophy professor. Their marriage is instantly recognizable as progressive, modern, and idyllic but frays at the edges as the pair navigate parenting, career, expectations, and diverging needs and desires. For better or for worse, these are the intimate stories of their life together.

There is a lot to fall in love with in Scenes from a Marriage, but this critic’s deepest devotions go to Oscar Isaac and Jessica Chastain for their remarkable performances. At a glance (a smoldering gaze, if you will), the appeal of this duo is undeniable. Ridiculously good-looking people with enough chemistry to singe the viewer with their heat, and the potent combination of marrying sex appeal to cerebral, thoughtful portrayals. Scenes from a Marriage is absolutely an actor’s piece because its entire premise hinges on marriage as performance art and the actors (the married couple) balancing an impossible dynamic. In every scene, the viewer must understand who these people are as individuals, who these people are as halves of a couple, and who they become when they’re not putting on a performance for their peers… and even their spouse.

Oscar Isaac brings his well-developed brand of sweetness and smoldering to his portrayal of Jonathan. He leans into the softness of the modern-day dad in his performance, but his on-screen presence is anchored in desire and attraction. Chastain, likewise, is able to shrink alongside that presence and start with reserved uncertainty before allowing her star power to shine through and give Mira her awakening. Scenes from a Marriage is at its best when years of personal and shared history are conveyed in a look or a small gesture or exchange. It is an incredibly subtle and sophisticated piece of television drama and Isaac and Chastain are giving their all. Beautifully done.

Scenes from a Marriage brazenly endeavors to bring today’s most pressing cultural concerns into focus, with each episode progressing through a series of gender and social questions. The series confronts traditional gender roles and the more conservative expectations at play in marriage, but with characters that are desperately trying to overcome those baked-in “ideals.”

Likewise, Jonathan and Mira are repeatedly faced with the question of what a “modern” marriage should look like. In our cultural reality, we are on a generational cusp that puts the traditional marriages of our parents and grandparents at odds with the new traditions that modern parents and spouses are attempting to establish. The brilliant writing of Scenes from a Marriage manages to allow Mira and Jonathan to stay firmly rooted in the contemporary, but answer these questions on tradition. Scenes from a Marriage echoes the original miniseries in its firm grasp on the current moment and what couples are facing.

Scenes from a Marriage is a provocative piece that beckons to our voyeuristic nature. It’s a sensual, even a little naughty exercise to allow a viewer to eavesdrop on such an intimate performance. Whip-smart, elegantly written, and exalted by close to perfect performances from Oscar Isaac and Jessica Chastain, this fresh take on Scenes from a Marriage is arresting and a more than worthy follow to its predecessor.