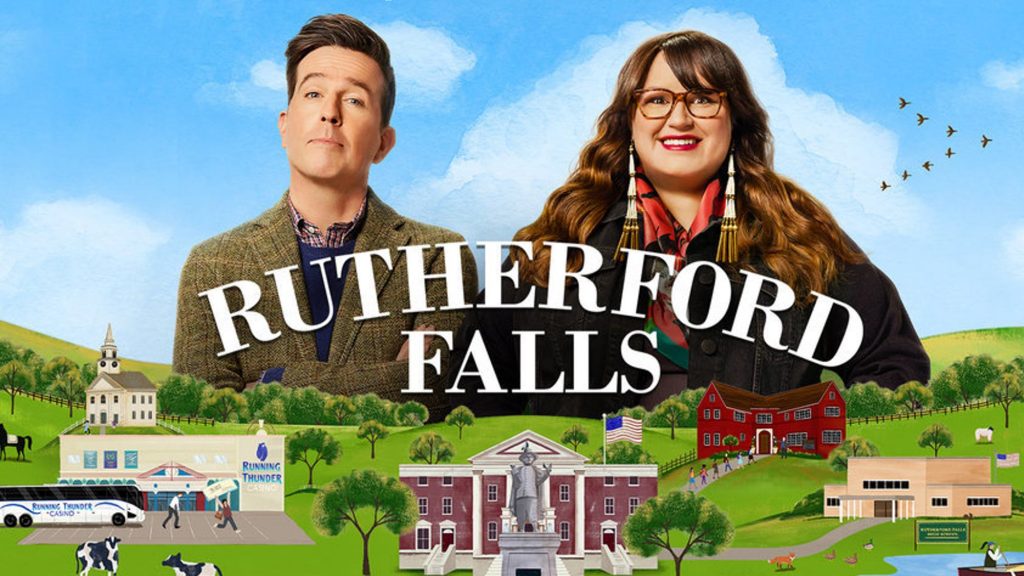 “People love a redemption story. Well, a white redemption story.” When people look back at the wonderful series that is Rutherford Falls, a show overflowing with great lines, this will be one of the many that stand out. Delivered by a consistently great Michael Greyeyes as the tactful Terry, it could be far-too-easily forgotten as being a quick little joke among the litany of one-liners that make the show so endlessly funny. However, it is also so much more than that as it cuts through both the show’s own story and narrative conventions writ large. A playful pillorying of how we expect stories like this to go, it is more than just a wink to the audience. Rather, it becomes a sharp thesis statement that the show delicately unravels over the course of Season 2. It all manages to leap above the high bar set by the first, landing on something both raucously funny and reflective. Each joke is packed full of meaning that explodes into interesting places that never fall into any tropes, pushing back against our expectations to great comedic effect. Sharp writing ensures it remains as refreshing as ever, reaching new comedic heights that challenge the form itself.

In one line, Greyeyes’ Terry has summed up the journey of Ed Helms’ Nathan Rutherford and all that he could represent in a lesser show. Thankfully for us, Rutherford Falls is no such lesser show as it continues to develop into engaging new places. After building his entire identity and self-worth around the Rutherford ancestry that he learned was not actually his by blood, Nathan ended the last season driving around the country in search of a new purpose. The investigative podcast about him dropped, and he will now have to reckon with his past mistakes. We saw how Nathan perpetually puts himself and his self-centered concerns first no matter what, often overlooking what others are going through to make himself important. While we don’t hear a lot of the actual podcast, we can more than fill in the gaps on what was said. This, smartly, ensures the narrative of the show itself doesn’t center on Nathan and the statue that dominated Season 1. Instead, it expands on the rest of the characters who all get more of their own comedic journeys, and are now made central to the experience.

This is what Terry’s observation represents, a rejuvenating sense of self-awareness that carries the second season through some of its weaker spots. While Nathan is never far away, even starting out far closer than almost anyone knows, the rest of the characters are where it really finds a rhythm. Both richly realized while still finding themselves in rather ridiculous scenarios, they make up the humorous and heartfelt core of the show. In particular, the show shines when we see contemporary Indigenous experiences and characters given center stage. It isn’t just casino CEO Terry as we also get more of Jana Schmieding’s resilient Reagan Wells who teams up with her boss in the season’s best episodes. She is still holding onto hope that she can expand the Minishonka Cultural Center, a passion that Schmieding conveys with both sincerity and silliness. While Reagan is more idealistic about the inherent value the center could provide, the cynical Terry is focused on his business and political upheaval in the small town. This perpetually feels all-too-real, capturing the awkward and insular nature of living in a place where everyone knows each other. Rivalries, headbutting, and humor all abound.

The way the two actors bounce off each other, both complementing and challenging the other’s character, is where Rutherford Falls is at its best. It all reaches a peak when Terry and Reagan are asked to come on as “cultural consultants” for a show within the show. It doesn’t matter that this is a bit extraneous to the main story as it provides ample opportunity for the duo to poke fun at the way modern stories both make use of and misrepresent Indigenous characters. After initially trying to genuinely shape the show to provide a more accurate representation, they quickly realize that their concerns are going to be ignored. Their presence there is just to provide cover for the show without them actually making it better. The way this all resolves is perfect as Terry in particular then puts on a gregarious face in order to turn the entire production upside down. It is the type of episode that will be worth revisiting on its own just for how good it is. In these moments, as well as an earlier one where he grills a man for Reagan, Greyeyes commands the screen. He can switch from being intimidating to more relaxed with ease, allowing him to hit unexpected comedic notes that sneak up on you. The more time the show spends with him the better it is. Terry defies easy categorizing, diving into creative new scenarios with veracity. Greyeyes represents the best of what the show can be, showing his multi-layered talents as a comedic performer that go underrated.

Reagan also gets to go on an intriguing journey as she seeks out land of her own, with comedy found in the endless bureaucratic hoops she has to jump through even as it remains frustrating. Imagine the agony of sitting at the DMV but on steroids, taking us on her path through the multiple circles of procedural hell with no end in sight. Of course, there is the looming question of the Rutherford in the room. Nathan himself is the one character who feels stuck in neutral, looking back to his past without ever finding something comedic to latch onto in his future. An old flame becomes his focus that isn’t ever as funny as everything else. What is fun is seeing Nathan alongside Jesse Leigh’s Bobbie Yang, whose comedic timing and delivery remain impeccable, as the two try to run a political campaign in the town. It is just Nathan’s other storylines that drag as they lack the same humorous pizzazz as the rest of the show. They are a little too sentimental as opposed to fully silly, paling in comparison to the rest of the show’s ability to strike this balance. One scene involving an obstacle course also feels dangerously close to being a jump-the-shark moment. However, this is soon forgotten as the rest of the show gets back on track and Season 2 continues to work, carving out a place that takes conventions we’re familiar with in interesting new directions. Rutherford Falls puts a much-needed twist on the sitcom formula, finding a perpetually clever sense of hilarity at nearly every turn.