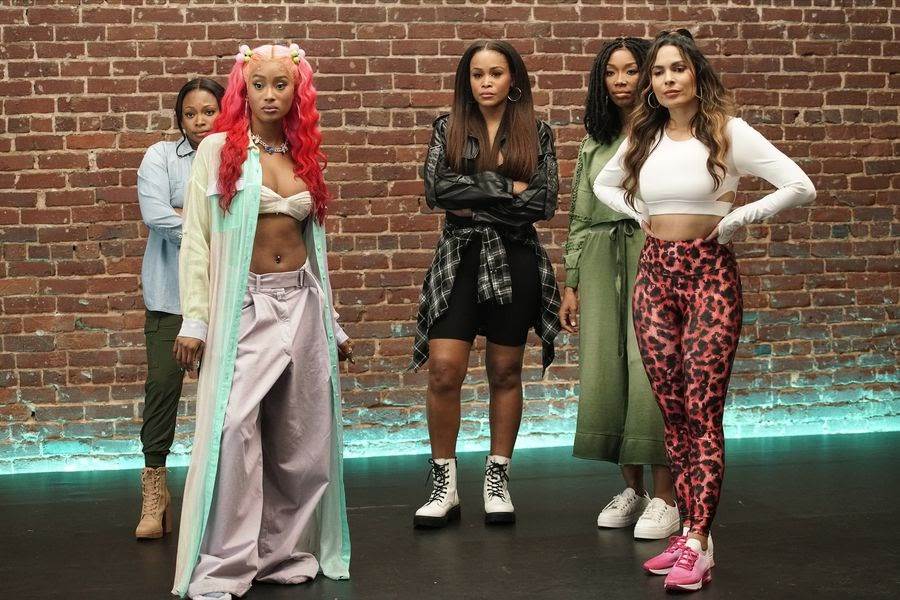 In defense of the Nasty Bitches — the less broadcast TV-friendly name of the girl group in ABC’s “Queens” — in the world of their show they were taken much more seriously as artists in the industry than Girls5eva, with a hit album and a career that only crashed and burned because of a very personal implosion. (Girls5Eva, meanwhile, was just one of the many pop groups du jour of the “TRL” era.) The Nasty Bitches were also a rap girl group instead of a pop girl group, which is perhaps the most important musical distinction between the two series; because while technically contemporaries in terms of the stories being told, right down to appearances on MTV “Cribs,” they ultimately came from different worlds altogether.

“Queens,” at its core, is a family story — and the rare network series starring four women of color primarily in their early 40s (Naturi Naughton is in her late 30s). In this case, we follow a found family that consists of Brianna/”Professor Sex” (Eve), Jill/”Da Thrill” (Naturi Naughton), Valeria/“Butter Pecan” (Nadine Velazquez) and Naomi/”Xplicit Lyrics” (Brandy) who all hail from Queens, New York and hope to re-create the special bond they had when they were at the top of the music world in the late ‘90s. This despite the fact they’re now plagued with marital, parenting and professional issues across the board.

As created by Zahir McGhee and executive produced by Tim Story, “Queens” definitely presents itself as more drama than outright comedy — but that doesn’t mean it takes itself too seriously. Eve’s one-liners as Brianna are the stuff of television quotes of the week. And for all the real-world issues the former Nasty Bitches have to contend with when they reunite — even though that also brings forth some issues of years past — the familiarity of close friends who’ve lost touch is immediately on display. Because the quartet crack jokes and tell it like it is to each other, “Queens” works almost instantly despite some of the predictable genre story beats or one-to-one comparisons with the Peacock series. (Naughton’s Jill and Velazquez’s Valeria are eerily similar to “Girl5eva’s” Gloria and Wickie in certain aspects.) But the ABC series instantly captures the friendship chemistry (and also the baggage) among these four characters.

The other reason the show works as well as it does is the music. Swizz Beatz serves as the executive music producer on the series, and produced (with Avery “Avenue Beatz” Chambliss) the first single from the show: “Nasty Girl,” which has a music video directed by Tim Story, who also directed the pilot). It’s so refreshing to hear Eve back in her hip-hop element again — but “Queens” also incorporates the talents and rap proficiency of the rest of the cast in an impressively seamless way.

While Brandy is obviously also known for her musical superstardom in addition to her acting, she’s dabbled in rap prior to this, performing as “Bran’Nu” on Timbaland’s Shock Value 2 album. But even those tracks could not prepare the audience for her character, Naomi aka Xplicit Lyrics, emerging as the hardest rapper of the quartet.

Naughton, who may be better known for her acting (in shows like “Power” as well as playing Lil Kim in 2009’s “Notorious”) got her start as a founding member of the girl R&B group 3LW. (She’s especially good here in the heavier dramatic moments.) And Nadine Velazquez, best known for her acting in shows like “My Name Is Earl” and “The League,” parlays her comparative lack of musical background into a character who’s regarded as the weakest rapper of the bunch. (To be fair, Valeria, aka Butter Pecan, is still good at rapping given the quality of the series’ music.)

“Queens” uses nostalgia in a way that’s not just about exploring how much better things were back in the day but seeing how the past can inform the present, for better or worse. The “TRL” era of pop culture remains ripe for the picking for contemporary storytellers — and a show centering on women of color offers a fresh take.