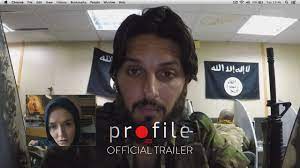 The film tells the story of a young female journalist who received an assignment to write a story about European women sent into sexual slavery by the ISIS. For this purpose she creates a fake profile of a British woman who has recently converted to Islam. On the internet she meets an ISIS fighter in Syria and they begin conversing with each other via Skype.

The film’s action takes place entirely on a computer screen and is part of the Screen Life genre pioneered by Timur Bekmambetov.

British-Pakistani actor Shazad Latif portrayed the ISIS terrorist convincingly. Valene Kane also created an interesting image of a frustrated British female, who has problems with her job, finances and in her personal life.

The film touches upon several important issues – the phenomenon of women who have been recruited by the ISIS, a real problem of our time, which has become more widespread in recent years. When we read about these things in the press, it is difficult to understand the motivation of these women, as they should know what can happen with them in these countries. However, the film convincingly shows how how a woman becomes transformed from a successful journalist into a woman who is willing to leave everything and go to war-ridden Syria.

The film is also about lie and deceit which exists in different variations on the internet. We should not forget that screen representation is only a small slice of life, which can be either truth or complete fabrication.

The film is very current, since in the epoch of the internet there are a lot of fake news and boundaries between truth and lie become difficult to distinguish.