Pink: All I Know So Far 2021 Movie Review | ABC Entertainment
Skip to content 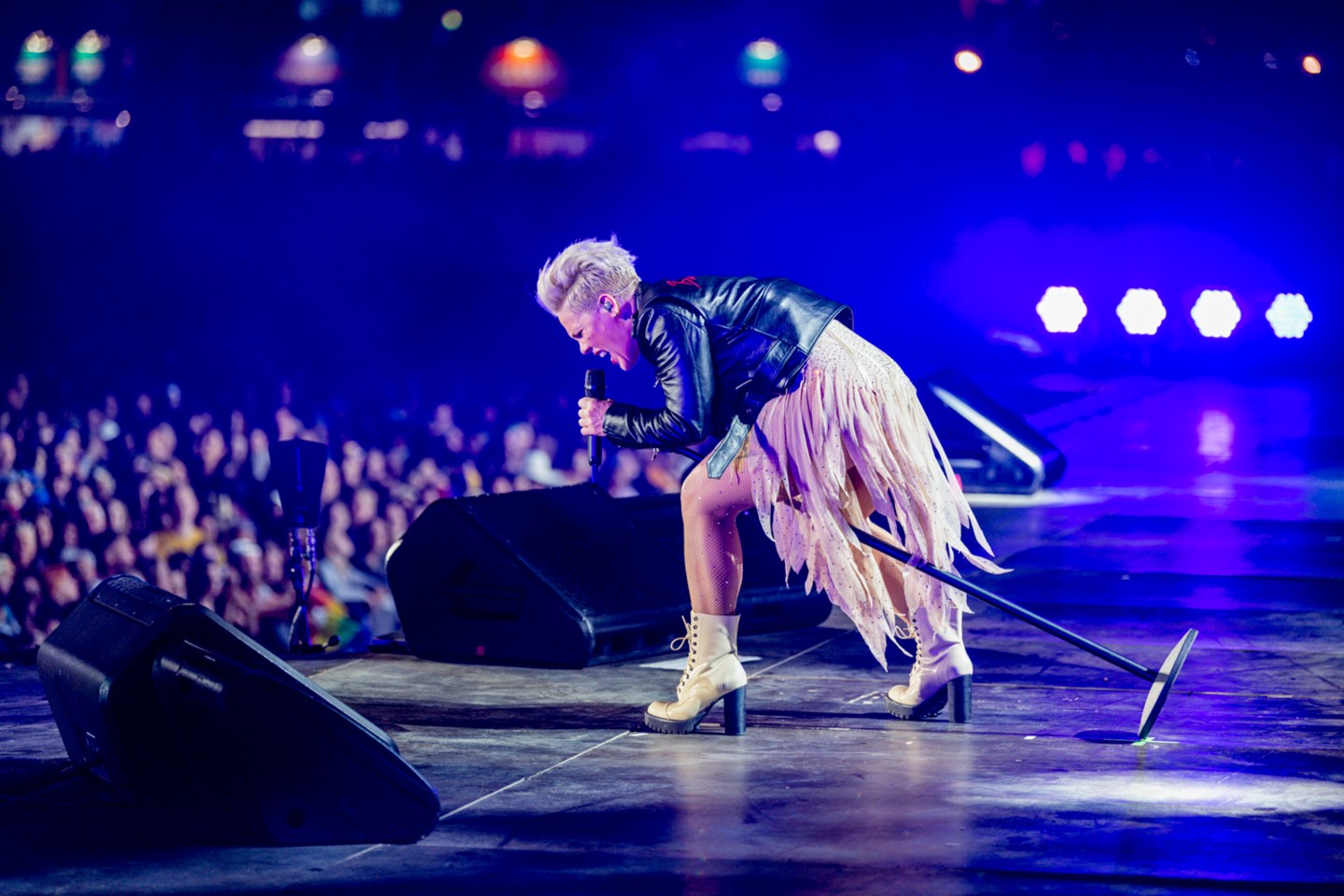 Michael Gracey’s P!nk: All I Know So Far chronicles Pink’s struggles to balance her responsibilities as a wife, mother, and a pop star during her 2019 Beautiful Trauma World Tour. But the way the documentary tells it, her problems mostly come down to ill-fitting costumes, only getting alone time when she’s blow-drying her hair, experiencing less separation between her art and family existence, and her daughter complaining about not going to summer camp because she’s stuck inside luxurious hotel suites and private jets.

Instead of revealing anything new about Pink, the film documents a pre-Covid-19 world of mass concerts and serves as a reminder of a dying type of mega-celebrity that Pink, and a handful of other living artists, represent—the kind of stardom that’s antithetical to the vulgar self-peddling and endless availability of social media influencers. Hers is a stardom built on isolated moments, not on every moment, and circulated through the physicality of records, crowds, arenas, and the glow of hard labor: rehearsals, workouts, travel, junkets, and more.

Pink’s edge, compared to others of her generation and the one before it, has always been her tomboyish recklessness. Whereas Madonna may say that she never does anything in a live show that hasn’t been rehearsed a thousand times, Pink’s bar of precision, she claims, is relatively low. She needs to only “kind of” know what she and her crew are doing during a concert, she tells us. “You’d get fired for that in a Madonna rehearsal!” she jokingly tells a dancer who screws up a number’s choreography during practice. And she constantly mixes good old American work ethic with many a bottle of wine. After all, her son is named Jameson.

The hagiographic All I Know So Far never manages to capture that which is often the core of an accomplished documentary portrait: the non-coincidence between what its subject says and what they do. Pink’s unruliness is something of an act considering the elaborate aerial acrobatics that have become inextricable from her performances at least since her dazzling rendition of Funhouse’s “Glitter in the Air” at the Grammy Awards in 2010. The slightest negligence and she could fall to her death. But Gracey isn’t interested in that gap between Pink’s mythology and her intimate self, or in instances when she might lose control of her words, or her body, of her image, or her narrative. The film is also blind to Pink’s anachronism, despite the various signs of the dissonance between her analog brand of celebrity and our digital times that she gives us: from going to Jon Bon Jovi for performing advice to referring to climate change as “global warming,” and defending gay marriage on stage.

There is, unfortunately, a clear agreement between filmmaker and subject that the film is meant to be more anodyne self-promotional content than a compelling portrait. Gracey tries to give some of Pink’s testimonials an aura of gravity by slapping on a black-and-white filter whenever the singer is pseudo-philosophizing inside cars. But because we never get a sense that she’s going off-script, or saying anything other than bromides about the difficulties of being a rich and famous white woman who wants “it all,” even her otherwise breathtaking performances feel like mere filler. They’re largely reduced to chopped-up montages linking the sections of the film that focus on her daughter, son, and husband, Carey Hart, with the exception of one stunning traveling shot of Pink flying around an empty Wembley Stadium.

The problem with All I Know So Far isn’t so much the triviality of Pink’s troubles or her unwillingness to show vulnerability, but that the film isn’t interested in exploring the fissures in her life in the rare moments when they begin to surface. Pink’s recollection of her fifth-grade birthday party, the year her parents got divorced, when none of her school friends showed up, receives no follow-up, or enough silence to allow for something, anything that’s been unaccounted for to emerge. We simply move on to the next limo ride and champagne toast. Hart’s confession that he resents Pink for being the only muse in their children’s lives, as he quit his motorcycle racing career years ago, is dismissed as non-consequential, and promptly diluted by the constant barrage of self-motivational mantras.

The rare scenes when unscripted emotion seems to be possible are betrayed by the film’s ultimate lack of commitment to anything other than Pink’s superwoman narrative. She’s able to kill it on stage and still find time to remind her daughter to put her retainer on before going to bed—a down-to-earth, no-fucks-given broad who does her own hair and has the power to save fans from the closet and even from suicide. The film overplays this dichotomy, ultimately rendering it awkwardly reductive. A melancholy private plane ride to Cardiff where the exigencies of family life take a toll is followed by a sequence where Pink shows us the extra hotel room she always demands for her “bare necessities”: 17 suitcases’ worth of clothes, shoes, and accessories for what Carey calls their “traveling gipsy family.”