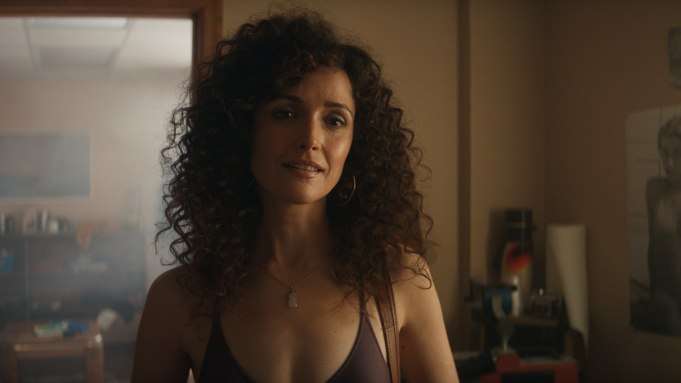 The new Apple TV+ series Physical opens with verve. It is 1986, and we are in the dressing room of a TV studio where a woman — who has her back to us for this whole opening sequence, but whom we’ll soon get to know as Sheila Rubin (Rose Byrne) — sits quietly in front of the makeup mirror, psyching herself up with Heart’s “Straight On” playing on her Walkman. She then (in a mostly unbroken take) struts out to the stage to record the aerobics workout show she apparently hosts. Her body sways, her muscles twitch, she is master of all she surveys…

… and suddenly it is 1981, and Sheila is in front of a different mirror, this time with us being able to see every pore and tiny blemish on her face, all while her merciless inner monologue tears her self-image to shreds. Her college professor husband Danny (Rory Scovel) intrudes, and we discover that his goal for the night is to have a three-way with Sheila and one of his students. This Sheila is master of nothing, least of all her own mind; when she finds out Danny is about to lose his job, her brain’s response is to scornfully tell her, “Hope you like sucking on unemployed dick.”

Physical is far from the first recent series to start in the middle of the story and then jump back to the beginning, but there’s something particularly off-putting about the way it does this. Needing five years of narrative time to get from Sheila in front of one mirror to her in front of another just feels like too much, not only because of how slowly the story moves once we land in 1981, but because of how unpleasant this phase of things is. An in medias res opening is meant to entice the viewer into waiting around through some of the dull introductory material so they can get to the fun stuff promised by the teaser. But here, it feels more like a bait-and-switch, one likely to leave many viewers pining for the show promised by that first scene — and much of Apple’s marketing — rather than the one Physical actually delivers.

Apple bills the show as “a half-hour dark comedy.” Mostly, though, it’s just dark: an unrelenting character study of a woman battling many demons, where scenes occasionally have the shape of something meant to be funny, but not the substance. Even the half-hour length, while technically accurate, feels like a cheat, because the amount of time we spend inside Sheila’s head makes the experience feel so much longer.

The Sheila of this first season is a lonely, frustrated housewife with a severe, expensive eating disorder that involves regular ritualized (and artfully photographed) binge-and-purge sessions in the privacy of a room at her local Howard Johnson’s. It’s clear that much of her self-loathing, as well as her difficultly maintaining friendships or even feeling close to her young daughter, stems from her inability to keep her bulimia under control. Every conversation threatens to turn to food, or even the possibility of being around food, and the very slender Sheila can’t stop thinking of herself as fat and unlovable. When her favorite ballet studio goes out of business, she finds inspiration at an aerobics studio run by the mysterious Bunny (Della Saba). But she can’t sweat out enough of her personal demons, especially once Danny decides to run for the California state assembly on a platform to protect San Diego’s coastlines, and his upstart campaign needs to dip into the savings that Sheila has already spent on burgers and motel rooms.

Created by Annie Weisman (The Path, Almost Family), Physical tries to consider the world outside its heroine’s most searing thoughts, without a lot of success. There are scenes not featuring Sheila, as we get to know her fellow preschool mom Greta (Dierdre Friel) and Greta’s secret-keeping husband Ernie (Ian Gomez); hang out with Bunny and her flaky surfer boyfriend Tyler (Lou Taylor Pucci, often the only genuine comic relief available); gain insight into conservative Christian real estate developer John Breem (Paul Sparks); and spend a lot of time — really, a huge, almost startling, who-exactly-thought-this-was-a-good-idea amount of time — with Danny and his old buddy Jerry (Geoffrey Arend) as they run the campaign(*). But Weisman and her collaborators (directors include Cruella‘s Craig Gillespie and Made for Love‘s Stephanie Laing) seem interested in the others almost entirely as obstacles or allies on Sheila’s quest for fulfillment and fortune. Saba’s great, for instance, yet the show keeps skipping over huge steps in Bunny’s uneasy partnership with Sheila, because considering how Bunny would actually respond to this erratic interloper would get in the way of the story. Greta at one point attempts to paint all the characters with the same sympathetic brush, declaring, “We are all sickos inside, anyway. Every single one of us.” But most of the show’s sickos are two-dimensional plot devices.

Scovel is actually very good at capturing the essence of a guy oblivious to his many shortcomings — maybe too good, given how much of the season is devoted to Danny’s “Save Our Waves” platform.

Instead, Physical is clearly most comfortable dwelling on the nasty things Sheila tells herself. Fortunately, Rose Byrne is giving a remarkably committed emotional and, yes, physical performance. The Sheila who speaks to the world and the Sheila who only speaks to herself are wildly different characters, yet both seem fully alive and given equal strength. Given the brilliant comedy chops Byrne has displayed in the decade since her last regular TV role on FX’s Damages, it’s a shame Weisman and the other writers don’t give her much in a humorous vein to play beyond those voiceovers — and even those are almost always too mean to generate laughs. Byrne is so precise in every movement, gesture, and inflection, and so full of energy, that on the rare occasions when this season stops acting like a leisurely premise pilot for the show that’s eventually coming, it feels as cathartic as Sheila so obviously finds aerobics(*). But the rest of it does too good a job of emulating the struggle Sheila feels to make it through each day without gorging herself on fast food or killing her useless husband.

(*) She’s also aided mightily by a great — if occasionally anachronistic — soundtrack full of early- to mid-Eighties hits like “Gloria,” “Edge of Seventeen,” and “Hungry Like the Wolf.”

As Sheila explores producing and selling a workout video featuring her and Bunny, an electronics store salesman tries explaining the merits of Betamax over VHS to her, rambling on about the format war of the era. Now we’re deep into the streaming wars, where customers have many more than two mainstream options, and every service has to fight hard to distinguish itself. After a bumpy start in late 2019, Apple TV+ has produced some of the more appealing shows of the past few years, including Ted Lasso, Mythic Quest, and For All Mankind. With this star, setting, and premise, Physical looked from a distance like another surefire success. But just as Sheila Rubin’s picture-perfect exterior conceals a whole lot of pain and suffering, the glitzy packaging of Physical is wrapped around a miserable, frustrating show.