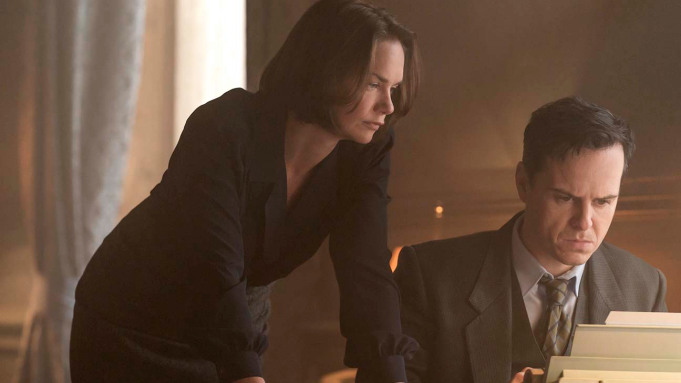 White House news footage at the end of Oslo shows Bill Clinton witnessing the 1993 Rose Garden handshake of Israeli Prime Minister Yitzhak Rabin and Palestine Liberation Organization chairman Yasser Arafat. That moment marked a landmark agreement in which the two implacable adversaries recognized each other’s legitimacy for the first time. The solemn emotional impact of the image is fueled by the knowledge that Rabin would be assassinated two years later by an Israeli extremist, and despite ongoing peace talks, that historic accord would be shattered as violence erupted again in 2000 with the Second Intifada. Recent headlines about the humanitarian crisis of the Gaza conflict now make the film’s reminder of the historic encounter cut even deeper.

Playwright J.T. Rogers won the top Tony Award in 2017 for his contemplative dramatic distillation of the nine months of secret back-channel negotiations known as the “Oslo Accords,” directed by Bartlett Sher with a forensic eye for detail and a gossamer touch with densely complex material.

The writer and director reunite on this classy adaptation for HBO, which trims the three-hour play by almost a third, sacrificing some of its tension, wry humor and probing character insight. But the film nonetheless is an engrossing, unfailingly lucid account of a momentous political breakthrough that interrupted a decades-long impasse. Few will be unmoved by its sorrowful timeliness.

Executive produced by Marc Platt and Steven Spielberg, this is a polished operation with a strong ensemble led by Ruth Wilson and Andrew Scott as Mona Juul and Terje Rød-Larsen, the married Norwegian diplomats who used their connections at the Foreign Ministry and in the Middle East to bring both sides to the negotiating table on neutral ground. (Those roles were played on stage by Jennifer Ehle and Jefferson Mays.)

Given that it was illegal at the time for Israeli and Palestinian politicians to have direct interaction, there’s intrigue even in the logistics and careful cajoling required to make the talks happen. But what resonates most in Rogers’ script is the desire of each side — generations of hatred notwithstanding — to stop slaughtering one another’s children and carve out a peaceful co-existence. To paraphrase words spoken by Wilson over the footnotes, the simple act of sitting across from our enemies to see and hear them as human beings can yield progress that remains stubbornly out of reach in formal negotiations. In that sense, Oslo makes subtle points about the impotence of the U.S. government in the Middle East conflict despite its proprietary involvement. Looking at you, Jared Kushner.

Among the additions for the film are flashbacks to Mona walking a Gaza street caked in the dust of a bomb blast and witnessing two young men — a uniformed Israeli soldier and a Palestinian civilian — confront the futility of their actions. That first-hand experience heightens her motivation for bringing the two sides together. While Mona stresses their need to remain neutral facilitators, Wilson’s restrained yet quietly impassioned performance becomes the heart of the film.

The frequent airport pickups and long drives up a spectacular coastal road to the site of the secret talks, stately Borregaard Manor in Sarpsborg, 60 miles east of Oslo, lend additional weight to the clandestine maneuvering required.

Scott is enormously sympathetic walking on eggshells among the spiky guests and jokingly wondering if they’ll be murdered in their sleep by Asfour. The unpromising start improves when Terje insists on one room for political discussions and another space to keep things purely personal, with free-flowing Johnny Walker, jokes and the heavenly waffles of the manor’s housekeeper (Geraldine Alexander) aiding the thaw.

When the Palestinians balk at continuing the discussions with powerless civilians, the Israelis have no choice but to send in a government official. The arrival of Foreign Ministry Director General Uri Savir (Jeff Wilbusch), a showboating exemplar of virile magnetism, raises the stakes. It also generates one of the film’s most affecting scenes when he follows a heated argument by inviting Qurie, known to his intimates as Abu Ala, for a walk in the snow, where the two men discover commonalities.

The final cog in the machine is hardass Israeli defense forces lawyer Joel Singer (Igal Naor), who comes with a 200-question response to the Declaration of Principles hashed out over multiple drafts. Given Singer’s role as author of the rules of engagement used by the Israeli army to suppress the Palestinians, his arrival causes Asfour to bristle. The fundamental difference remains that one side believes they are voluntarily shrinking their country while the other insists they are merely giving back, not giving up what was never rightfully theirs. But a workable agreement eventually is reached, allowing Mona and Terje to present it to Peres during a state visit to Stockholm. The sound of PLO officials weeping on the phone over an advent they never thought they’d live to see is quite stirring.

Rogers thoughtfully frames the entire negotiation against the backdrop of a skeptical world that, like the men on that call with Peres, no longer believes peace is possible. This gives Oslo a melancholy undertow enriched by Jeff Russo and Zoë Keating’s elegant score for piano and strings.

Sher, a top-tier New York stage director who has done outstanding work across plays, musicals and opera, brings a confident hand to his first film project, getting deluxe input from the refined compositions and exquisite lighting of Janusz Kaminski’s cinematography. The final shot, of the empty negotiating table bathed in soft sunbeams from open windows, is a poignant suggestion of the possibilities for mutual understanding even in a world of age-old hostilities.