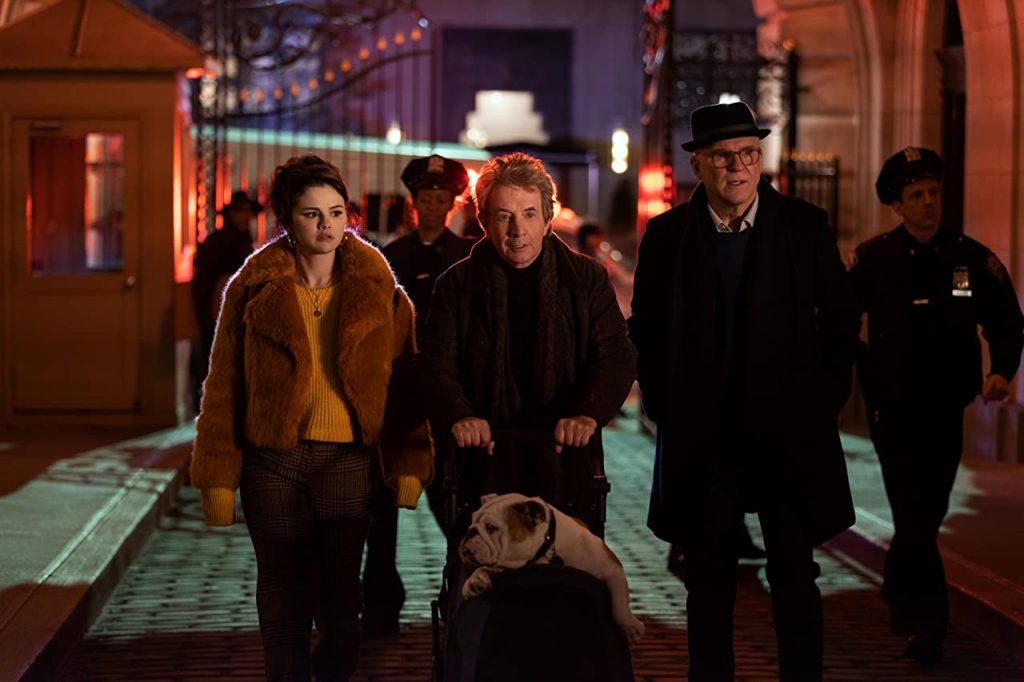 It makes sense that Only Murders in the Building (Disney+) would have had the decency to end its first season with a good old-fashioned cliffhanger. The meta murder mystery was an elegant charmer that combined a meaty crime plot, New York’s crotchety appeal, good physical comedy – watching Steve Martin roll around in a lift for half an hour is a total delight – and a sly self-awareness, all of which made for a classy debut. Sure, Charles, Oliver and Mabel solved the key mysteries of season one, and got a hit podcast out of it, but there were, as Mabel pointed out, “still a couple of loose ends” left to tie up.

This second season, not as finely balanced as the first but still a lot of fun, pulls at those loose ends until they unravel, then unravels them more. We now know who killed Tim Kono, but as the trio celebrated saving the Arconia, Mabel was found holding a knitting needle and covered in blood, hovering over the body of poor “cranky old bitch” and outgoing Arconia building president Bunny Folger. Naturally, the police are strict about the fact that as “persons of interest” in Bunny’s murder, they absolutely must not make a podcast about it. But murder is their hobby – not like that, obviously – and they have a taste for true crime, so it isn’t long before they go in as the Hardy Boys, round two.

There is a lot more going on here than in the first season, which is saying something. Only Murders is a many-layered cake, a Bake Off finale showstopper, and this second season adds tier after tier. Now Charles, Oliver and Mabel are investigating a murder in which one of them is implicated. Mabel becomes internet-famous and is nicknamed Bloody Mabel, which leads to some interesting riffs on notoriety (and reminded me of the much-missed Search Party).

At the same time, Cinda Canning (Tina Fey) is back, making a podcast about the podcasters, called Only Murderers in the Building. Then Amy Schumer takes on Sting’s old apartment, and dangles the possibility of a small-screen dramatisation of the original podcast. “I wanna go full prestige,” she tells Oliver. Her pitch isn’t the only TV show within a TV show. There are flashbacks and period episodes, and still, there is room for slapstick involving a knife. As I said, a lot is happening.

Outside all the clever moments and the arch meta-ness of it all, the plot thickens in other ways. Our core trio are given lives and relationships away from each other and outside the Arconia. Charles returns to his acting career and we find out more about his family, past and present. Martin Short continues to preen as the fabulously narcissistic Oliver, but we get more of his family, too. And Mabel (who knew Selena Gomez was so deadpan, and so good?) becomes embroiled in the Bushwick art scene, and a possible relationship with a posh English poseur, played with aplomb by Cara Delevingne.

Its guest stars remain as impressive as always. Fey is brilliant as Cinda Canning, as is Schumer as Schumer. There’s also room for the legendary Shirley MacLaine, who turns up with a very specific cocktail order and wearing Iris Apfel-style specs, and plenty of other top-drawer actors whose appearances are so often a surprise that to say who they play would spoil the fun.

The best episode of the six I have seen focuses on Bunny Folger’s final day, and it is also the simplest plot-wise, and requires the least amount of dashing around. Putting the art world into the story makes for an easy target when it comes to satire, and as with Only Murders’ generation-gap comedy, it can be ever so slightly obvious.

Sometimes, though, obvious is all you need: Charles’s attempts to dictate a text from his own phone had me laughing out loud, as did his attempts to decipher two people under 30 talking to one another. “It’s like I’m watching Squid Games without subtitles,” he grumbles. The brilliance of this show is that you want to solve the mystery as if it were a thriller, but you get all the pleasure of it being a comedy, too. “Second seasons are tough,” says Oliver, early in the run, talking about the podcast. If he’s offering a preemptive apology, he doesn’t need to. I’d bet a crate of Gut Milk that Only Murders will keep its grip on viewers until the very end.