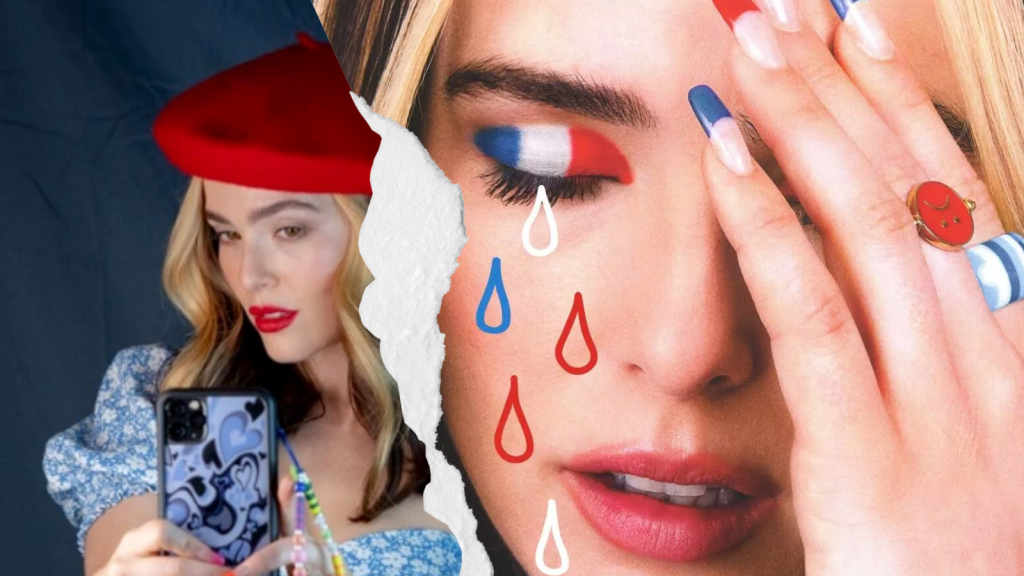 Nestled among a pile of junkfood wrappers and assorted depression detritus, Danni Sanders (Deutch) reads all the vitriol directed at her on the internet and voiceovers about how, for so long, she just wanted to be seen. Then she turns to the camera and tells us, “Be careful what you f—ing wish for.” TWO MONTHS EARLIER, she sits in her boss’ office. She works as a photo editor for Depravity, a website-slash-magazine that publishes – well, I don’t know. Poorly fact-checked lifestyle shit and hot takes, one presumes, and a Ruth Bader Ginsberg retrospective written by Danni’s workplace rival, Harper (Nadia Alexander). Does the world need yet another RGB retrospective, one wonders? I dunno. Tough call. It definitely doesn’t need what Danni pitches: an indulgent first-person column in which she laments missing out on 9/11 because she was on vacation. “Can’t tone-deaf be like a brand, though?” she says, before she’s sent back to her desk to edit photos, which is what she’s paid to do.

For some reason – neediness, desperation, an inexplicable attraction to sloppy anticharismatic dudes – Danni has a thing for co-worker Colin (Dylan O’Brien), a serial weed-toker with hundreds of thousands of Instagram followers and a Pigpennish omnipresent cloud of vape smoke surrounding him. Few things turn her on more than a verified account, it seems. To get his attention, she fibs that she’s on a writer’s retreat and faux-Emily in Parises herself, posting photoshopped pics of her beret-topped face in front of the Eiffel Tower and other landmarks, tossing around baguette emojis willy-nilly.

Then we get one of the movie’s snarkotastic chapter headings: PART III: OH F—. Terrorists execute a series of coordinated bombings of Paris landmarks, mere moments after she posts herself smiling in front of the Arc de Triomphe. And now Danni has to pretend to get off a plane so she can hug her concerned parents. Then she rides the lie like Roy Rogers on Trigger. She attends a support group and befriends earnest and charismatic school-shooting survivor Rowan (Mia Isaac), an activist whose blue checkmark and 520k followers makes Danni’s eyes widen. Danni steals some phraseology from her new friend and writes a first-person account for Depravity detailing how she was nearly killed by terrorists and that it’s OK to not be OK, thus hashtagging her way to viral fame. Of course, as the framing device already revealed, that bubble has to burst, but still, all this makes one feel as if one’s sitting on an atomic bomb, waiting for it to go off, although in this case, we kind of want it to go off, right in Danni’s face. They were right about the unlikable protagonist thing.

Writer-director Quinn Shephard’s satirical carpetbombing of Clickbait Nation is stylish, witty and entertaining, with a pair of terrific performances by Deutch and Isaac (who was a shining light in the recent weepie Don’t Make Me Go) and opposite sides of the sincerity coin. Perhaps Not Okay is a reflection of the current post-ironic era in how it leavens its satire with earnestness and lacks killer instinct; I mean, as unlikable as our female protagonist can be, Shepherd still muddies the waters by courting our empathy for a person who made a huge mistake, and deserves some forgiveness. Right? Eventually? In a society that believes in rehabilitation? And has newfound sensitivities for those who struggle with mental illness? Danni’s just a total shit with a compulsive desire to be admired, not a serial killer, or even Martin Shkreli.

Deutch keenly and quietly cultivates Danni’s anxieties within a cocoon of look-at-me/please-love-me quirks: Crazy hair and nails, prescription “happy pills,” a toothy smile covering up the pain of a privileged upbringing (her parents live in a high-rise with a doorman). She has to manufacture her own trauma, and boy, does she ever succeed. And the easiest way to get likes and eyeball emojis is via social media, a realm led by either the deeply wounded, like Rowan, or vapid morons, like Colin. Danni tries to be the former, but deep down, she’s the latter, except when she’s taking antidepressants and has nobody to talk to except her guinea pig. She’s complex, is what I’m saying.

And therefore curious is one of those chapter headings, which reads I DON’T GET A REDEMPTION ARC, because we should feel bad for Rowan, not the phony in this story. At least for now. Yes? Maybe? Deutch and the screenplay churn up some amusing moments, but ultimately leaves us searching for a more sharply honed point to all this. To be fair, we’re still in the middle of the internet-era milieu, and answers to great, overarching questions have yet to be resolved. One thing’s for sure – we could use a little less depravity, of both the uppercase and lowercase variety.