Munich: The Edge of War 2022 Movie Review
Skip to content 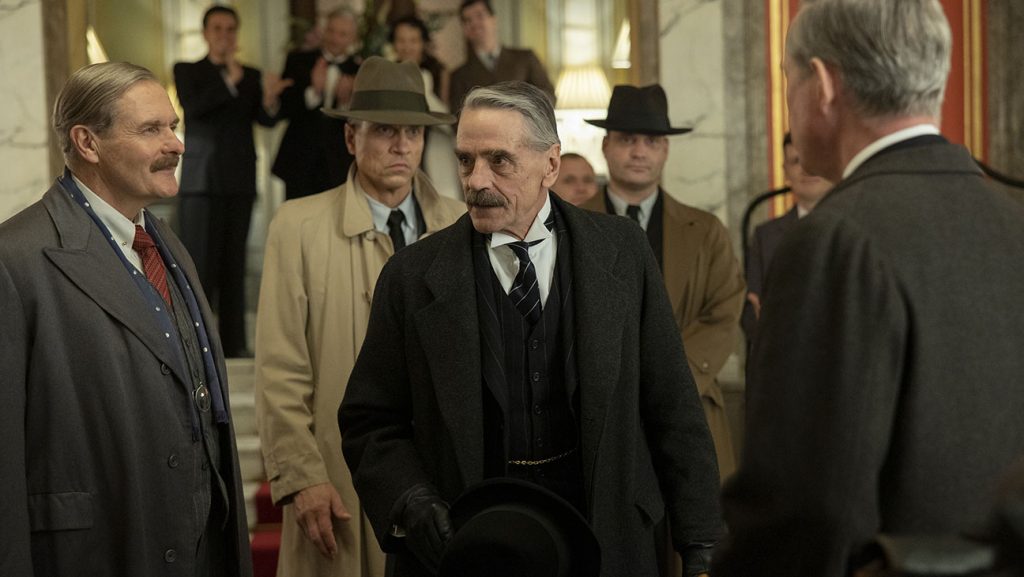 Greetings again from the darkness. It seems reasonable to ask why someone didn’t take it upon themselves to stop Hitler before things went so far. Of course we now have 80 years of hindsight to benefit our thoughts, but surely there were those who recognized the reign of terror brewing. The 2017 international best-selling novel, “Munich”, by Robert Harris, has been adapted for the screen by writer Ben Powers, and is directed by Christian Schwochow. It has the look and feel of a political spy thriller, right down to the clandestine meetings, smoking jackets, and heavy mahogany furniture in the conference rooms.

George Mackay (WOLF, 2021) stars as Hugh Legat, and Jannis Niewohner co-stars as Paul von Hartman. We first see them as 1932 Oxford classmates with their mutual friend, Lenya (Liv Lisa Fries) … one English, one German, and one Jewish. A ferocious disagreement over Hitler sent the three friends off in different directions. It’s not until late in the film that we discover what happened to Lenya, but the bulk of the story features Hugh as an attaché to British Prime Minister Neville Chamberlain (Oscar winner Jeremy Irons), and Paul as a German diplomat under the Fuhrer (Hitler is played by Ulrich Matthes who was Goebbels in DOWNFALL).

The timeline revolves around the build-up to the 1938 Munich agreement, just on the brink of WWII. Chamberlain remains focused on avoiding war, while Paul has secured documentation proving Hitler’s plan goes far beyond taking on the Sudetenland area of Czechoslovakia. Paul remains loyal to his homeland, but understands Hitler must be stopped. Working with Helen Winter (played by Sandra Huller), his co-conspirator and paramour, they devise a plan to get the documents to Paul’s old friend Hugh, in hopes that he will deliver to Chamberlain so that Hitler’s vision of domination can be stopped.

This is a dramatized and fictionalized version of what transpired, and Chamberlain’s legacy is still debated to this day. Did Hitler outmaneuver him or was Chamberlain buying needed time to build up the military and garner strength with allies? It’s great fun to watch Mr. Irons jump into this role, even if this is a favorable and somewhat forgiving view of Chamberlain’s approach. The tension is created as old pals Paul and Hugh secretly unite in cause, and is especially present in a scene where Paul is alone with Hitler. Unlike Chamberlain, the goal of the former classmates is to stop Hitler, not just stop or delay a war.

History buffs may cringe a few times, but for an entertaining political drama inspired by history, the film delivers enough to keep us interested. The weakest links involve Hugh’s struggles at home with his wife Pamela (Jessica Brown Findlay), who doesn’t understand why her husband can’t explain to her what’s happening at work. Performances from Mr. Irons and Mr. Niewohner are quite interesting, as is the provided quote, “Hoping is waiting for someone else to do it”.