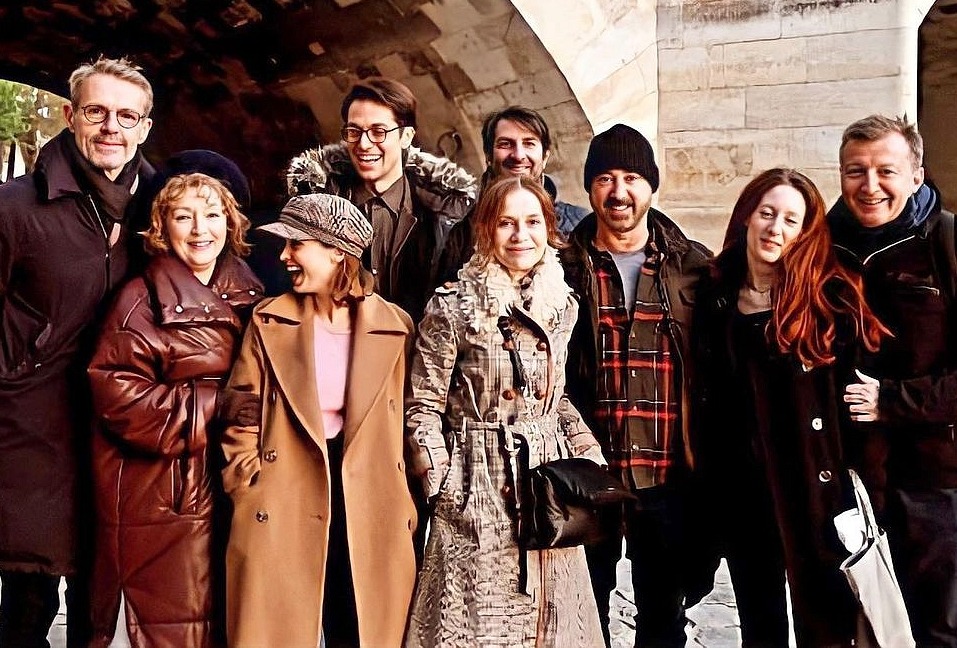 “Mrs. Harris Goes to Paris” is so much bubbly, frothy fun that it makes you wonder how “feel good movies” ever got a bad name.

Director Anthony Fabian and a team of co-writers make this glorious, feather-light period piece effortlessly amusing and above all, sweet. The best “feel good” movies do a little something to restore our faith in humanity, and this one does that, time and again.

This sentimental adaptation of Paul Gallico’s oft-filmed novel reminds us that Gallico’s mid-20th pop fiction turned up on screen about as often as Stephen King’s does today — from “Lili” and “Thomasina” to “The Poseidon Adventure.” It makes a grand showcase for Lesley Manville, best known in recent years for playing Princess Margaret in “The Crown,” but a favorite of director Mike Leigh and an Englishwoman who has no trouble playing roughhewn American (“Let Him Go”) when the needs arises.

Mrs. Harris is a simple, widowed cleaning woman who manages a penuriously comfortable life in 1957 London, working for multiple clients — a posh bachelor (Christian McKay), a lord and lady (Anna Chancellor) who won’t pay her on time, and a more-self-absorbed-than-the-rest young actress (Rose Williams).

There’s just enough left over at the end of the week for a night at the pub or even the dog track with her fellow cleaning woman Vi (Ellen Thomas) and the aging, working class Irish lady’s man Archie (Jason Isaacs, adorable).

But there are shadows hanging over this limited life. There’s not a lot of cash on hand for a woman in her 50s and working this hard. It’s a limited life.

Mrs. Harris is “widowed” in that her husband was missing in action in “The War.” She’s superstitious about “My Eddie,” not wanting to do anything to imply she’s given up hope he’ll show up over a dozen years after his disappearance. And she’s always looking for “signs” that Eddie is looking over her.

The day her life changes is the one she spies a new dress the Lady Dant (Chancellor) has purchased for her daughter’s all-important wedding. It’s glorious. It’s from Christian Dior in Paris. And even though this one-percenter can’t pay her employee on time, she had 500 pounds sitting around to purchase a piece of haute couture.

Mrs. Harris swoons. Mrs. Harris has a goal. She must have such a dress. A life of labor and penny-pinching will have its reward. As she doubles up work, takes in sewing and the like, scrimping and saving, she shrugs off every obstacle that gets in her way, and sees every boon as a sign. “It’s my Eddie, my angel!”

And damned if events and her friends don’t conspire to make sure this unassuming woman’s one, all-consuming dream comes true. But one first-ever plane ride to Paris later presents a new set of obstacles. Dior’s overlord (Isabelle Huppert, magnificently maleficent) dismisses her with an “I fear you have the wrong address” as a showing for the rich and richer is beginning. A sea of snobs and an officious, rude staff could end this dream right now.

Because it’s not like she can just buy a dress off the rack. But the sight of her rolls of cash wins her one champion — the cash-flow fixated bookkeeper (Lucas Bravo). And a simple act of courtesy by Mrs. Harris has made “the face of Dior,” the model Natasha (Alba Baptista) another fan.

The magnanimous Marquis de Chassagne (Lambert Wilson) insists she sit with him as his guest, and shows her the ropes of such exclusive private showings. Oy, oo’s that over there? Why, Monsieur Dior, my dear woman. “‘e looks like my milkman!”

Manville keeps the character just this side of Eliza Doolittle, and Fabian (“Skin,” “Louder than Words”) lets the obstacles arrive, one after the other, followed by the working class woman’s plucky work-arounds. There’s delight in this story thanks to just the right proportion of heartaches and heartwarming mini-triumphs.

Much attention is paid to the milieu, with 1957 Paris in the middle of a sanitation workers strike, Dior in dire financial straits and London a lot more integrated than the whitewashed movies of the day let on.

Manville perfectly captures this throwback character, a member of the “Keep calm and carry on” generation inclined to be of service to one and all, but awakened to something of the bum deal the working class has been dealt by the rich as she’s schooled by the striking French.

A little romance, a little match-making, a trip to the Folies Bergere, a first-ever ride on a Vespa, a few fittings as part of bespoke dressmaking and an awful lot of twinkling put the frosting on this cake.

And this cast, from top to bottom, adds to the sense of the effortless charm of it all, so much so that you just know herculean labors must have been involved to make it so.

Not to gush or go too far overboard, but the warmth of a movie like “Mrs. Harris” is downright restorative in the viewing, two escapist hours that remind us that everyone is entitled to courtesy, a fair shake and a little beauty and luxury, and most of all, the hope that life can get better.