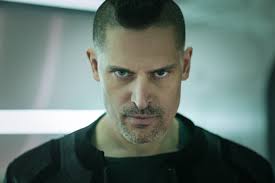 As an enterprise, science fiction is loaded with temptation. The license to remake society in a specific image, with the added freedom of bending conventional logic in the process, makes overindulgence a very real possibility. At the same time, any futuristic story aiming for something operatic can feel rote if it doesn’t fully consider how changing conditions could really transform everyday life.

The most remarkable thing about “Moonhaven” — the latest original drama for the streaming service AMC+ — is the way it’s able to indulge its creative ambitions on an expansive canvas, all without losing sight of the individuals who make up the tableau. It finds that ultra-satisfying sweet spot between the radical and the familiar, a middle ground where discovery can happen over the course of an entire series and not just its opening chapter. Though it has its share of genre trappings, the broader conflict brewing around the edges of this exciting fictional world is more of a catalyst than the primary area of concern.

That conflict begins in the series’ opening frames, which shows the moments before a rare instance of homicide in otherwise-idyllic territory on the Moon. Two centuries in the future, a more-benevolent artificial intelligence, IO, has terraformed the lunar landscape and allowed a human civilization to thrive. Over decades, the residents of the Moonhaven colony have unlocked sustainable solutions for the societal, geopolitical, and ecological problems that have swept across Earth in the intervening years.

As the first wave of individuals prepares to return to their ancestors’ home planet and bring IO’s secrets with them, Earth-sent envoy Indira Mare (Amara Karan) arrives on Moonhaven, along with her lieutenant Tomm (Joe Manganiello) and ex-military pilot Bella Sway (Emma McDonald). Their presence coincides with the ongoing murder investigation, led by detectives Paul Sarno (Dominic Monaghan) and Arlo Noon (Kadeem Hardison). The longer these strangers spend in or near each other’s company, the more they realize their fates are more intertwined than they may have previously thought.

“Moonhaven” isn’t built on sheer scale in the same way that something like “Foundation” thrives on. This is a show that builds outward from the center rather than starting wide and zooming in. There’s some inherent grandeur in the overhead glimpses of the Moon’s surface that show an island of lush green in the midst of dusty crater, but there’s more wonder to be found in Paul or Bella making their way through the almost-tropical forests that surround the town centers. The most interesting part of watching Bella’s ship fly through the sky is watching her steer. It’s not the brawling action setpieces that are the notable attraction here, as much as watching what methods the Mooners take to heal those injured in the fracas. As much as “Moonhaven” puts in effort to paint a vivid portrait of the apocalyptic conditions on Earth, seeing Bella or Indira speak about their lives “up there” or hearing Paul reference some historical battle is almost enough to fill in those gaps all their own.

Futuristic utopias often carry with them an Uncanny Valley edge: All may look peaceful, but there’s an immediate understanding that tranquility comes at a price, often some menace lurking underneath ready to destabilize everything. To some extent, “Moonhaven” isn’t fully exempt from some of those ideas, but it does take the time to meet this lunar society on its own terms. Even as it opens with a crime, there’s a concerted effort to show clear-headed reasons for why Moonhaven citizens would be invested in keeping this way of life thriving. It’s not as much an absence of doubt in their own society as it is a continued confidence in life the way it is.

It’s all squarely placed in the midst of a society coded as technologically advanced but still incredibly tactile. In that way, directors Bridget Savage Cole and Danielle Krudy are able to build out a meticulous and keenly observed introduction to this world as they did in their 2019 feature “Blow the Man Down.” The colors might be more abstract (stunning pastels around every corner!), the tunics more abundant, and the law enforcement apparatus noticeably reshaped. Yet there’s a calmness and patience to this overview of Moonhaven that also makes it feel like a community that truly has settled into its rhythms over the course of multiple generations.

To some extent, “Moonhaven” is able to withstand its occasional conspiratorial layers because it has a very visible playful side, too. The dynamic between Paul and Arlo is a winking one, a look at what detectives within a post-police society would have time to freely indulge in. Even the tech design here has its own dusting of whimsy: digital devices made from wood, innovative ways of playing recorded music, and video screens in unlikely places. All of them are indicative of a world that prizes efficiency and stability without sacrificing aesthetics. That also goes for the show itself.

Without being a neat and easy allegory, “Moonhaven” is able to build from that foundation to touch on the universal idea of what we owe to each other. It’s something woven into the fabric of “Lodge 49,” the TV gem on which “Moonhaven” creator Peter Ocko previously served as showrunner. It was a show that used Long Beach as a much smaller-scale jumping point for universal stories about looking for connection in an unpredictable world. On the moon, society is working from a much more fixed point. There’s a fundamental shift in the perception of family, the first step in a communal approach to life that keeps everyone there accountable and committed to each other flourishing. Confronted with the reality of life on Earth and the prospect of puncturing their own bubble to bring that same contentment to people outside their sphere, some balk.

Beyond that idea of “lunar security as privilege,” there’s plenty for “Moonhaven” to address by looking inward in other ways. It considers whether an all-encompassing surveillance state is more insidious if the expected negative consequences of such a life are mitigated or wiped away entirely. The longer the season progresses, the more it delves into how people come to terms with institutional collapse, when faith in guardrails and long-standing traditions begins to falter.

It certainly helps to have two characters, initially set in motion as tidy opposites, who are able to cut right to these arguments in a surprisingly elegant way. Bella’s skepticism makes her an ideal vector for experiencing Moonhaven as an outsider. Watching McDonald ably switch between Bella being won over by arguments about lunar life and confounded by others helps keep the overall show in balance. And as the other half of the show’s moral center, Monaghan locates the exact tenor that each new scene demands. Paul has a joking side underneath his sage, protective outer shell. There’s a gentleness and selflessness in Monaghan’s performance — the tension between the seemingly endless options at Moonhaven’s disposal and the contented, contained nature of its people is a dynamic that the show revisits, with good reason.

Showing this many versions of interior life in the face of brewing uncertainty makes this a perfect companion piece to “After Yang,” another 2022 vision of the future that draws its strength from a more sober consideration of tomorrow’s dilemmas. There’s also a similar care in showing how linguistic patterns, societal customs, and vestiges of Earther culture would evolve and mutate over time in a place untouched by certain concerns. Rather than exist as a parody of spiritual enclaves, the people of Moonhaven take on a collective disposition shaped by the absence of most tribalism, mistrust, and (with the help of a concentrated pill offered to those who have experienced trauma) grief.

That lack of ironic presentation makes “Moonhaven” feel like a much more sincere attempt to understand what its own possibilities can bring. It’s a science fiction drama, but it’s also a simmering political thriller and an apocalypse story and a detective comedy and a chronicle of a family unit in flux. Though four episodes, that massive collection of options isn’t overwhelming at all. That Ocko and the show’s writers have been able to set up so many storytelling options while keeping hold of the overall Moonhaven thread is a delicate achievement in its own right. The fact that it’s a world enticing beyond just the ideas powering it makes for an even better lunar voyage.