Minions: The Rise of Gru 2022 Movie Review
Skip to content 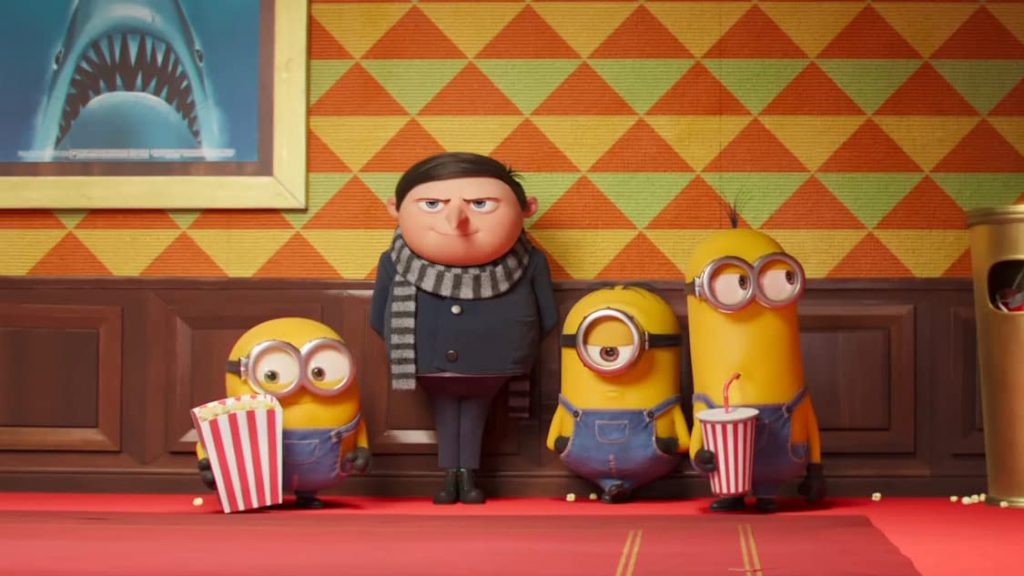 Every entry in the “Despicable Me” franchise is technically a Minions movie, since one way or another, the adorable yellow buggers manage to steal the show. But the fun thing about 2015’s stand-alone prequel was just that: It allowed the Minions to stand alone, pairing them with someone other than Gru for a change.

Gru’s great, but his bad-guy-gone-soft shtick is starting to get old. Now, in “Minions: The Rise of Gru,” we get to see him young: At the mischievous age of 11, he’s already sporting the hunchback and hook nose, and dreaming of world domination. On career day at school, the enfant terrible (still voiced by Steve Carell, delivering his Eastern Euro accent at a slightly higher little-kid register) announces, “I want to be a supervillain!” And not just any supervillain. He wants to join the Vicious Six, but isn’t sure whether the Minions will help or harm his chances of joining their ranks. Meanwhile, we already know the answer, since the brand can handle a movie without Gru, but not one without the Minions.

With every film, Illumination’s technique improves. But unlike some studios’ output, these movies aren’t showoffy in the slightest, using incremental advances (like the capacity to host set-pieces in various San Francisco neighborhoods) to support the action, rather than distracting from it. The creative team, led by director Kyle Balda, blends Three Stooges slapstick routines with the classic squash-and-stretch character animation of the golden era, while getting creative with how to stage such gags in three-dimensional space. (Consider the movie’s kung fu training section, which accomplishes most of its laughs through clever cutting.)

By now, you’ve probably figured out that the “Minions” sequel is really more of a “Despicable Me” prequel, introducing a few of the elements — such as mad scientist Dr. Nefario (Russell Brand), future rival Vector and the Bank of Evil — that feed directly into the original movie. We’ve seen this strategy plenty with other properties, from “Star Wars” to “Cruella,” both of which “The Rise of Gru” resembles, except that here, an ostensible good guy doesn’t turn to the dark side because his preferred career path doesn’t work out. Villainy was his Plan A all along.

Everybody has idols. The Minions look up to their new “mini boss,” even though he’s no taller than they are at the moment. Meanwhile, Gru decorates his childhood bedroom (he still lives with mama Marlena, voiced by Julie Andrews) with pinups and action figures of the best baddies in the biz: Belle Bottom (Taraji P. Henson), Stronghold (Danny Trejo), Nunchuck (Lucy Lawless), Svengeance (Dolph Lundgren), Jean-Clawed (Jean-Claude Van Damme) and Gru’s personal favorite, the legendary Wild Knuckles (Alan Arkin). Together, they form the Vicious Six. Thing is, you can never truly trust a supervillain, and midway through their latest heist — stealing the Zodiac Stone from its jungle hideout — Belle lets Knuckles fall to his likely death.

Hence the vacancy Gru so desperately covets. The kid shows up to interview for Knuckles’ old spot and is all but laughed out of the room. “Evil is for adults,” Belle tells him, “not for tubby little punks.” Refusing to go home empty-handed, Gru nabs the stone from right under their noses, sparking a high-stakes game of hot potato. The agitated quintet comes after him, while Knuckles (who’s a lot harder to kill than anyone might have thought) also looks for a chance to recapture his prize.

Where do the Minions fit into all of this, you ask? The movie answers how Gru came to adopt them in the first place. If “Despicable Me” was about how three orphan girls make Gru an unlikely father figure, this one suggests the Minions were good practice for the job. But even though it’s nice to have a dedicated team of extra hands, Gru isn’t convinced that these silly, clumsy, earplug-looking assistants can earn their keep. They’re always messing things up. Like the Zodiac Stone theft. Pursued by five of the Vicious Six, Gru hands the prize off to a squatty, chatty, more-than-slightly SpongeBob-y new Minion named Otto (like the others, he’s voiced by Pierre Coffin in a high-pitched mix of surprisingly intuitive gibberish), who trades the magic stone for a pet rock.

Furious, Gru fires the lot of them, effectively putting the pressure on these bumbling groupies to earn their jobs back. And thus, the Minions reclaim their role as the movie’s main characters. But instead of dealing with the whole herd of them, director Balda focuses on Otto and everybody’s favorite trio — tall-and-skinny Kevin, one-eyed Stuart and attention-deficit mini-minion Bob — who all make their way to Northern California after Knuckles kidnaps their master (only to become his mentor).

The San Francisco scenes play quite well until the climactic standoff, when the Zodiac Stone’s power is unleashed and the Vicious Six take on fearsome animal forms — dragon, monkey, snake, tiger, etc. — while the Minions become the least intimidating version of a bunny, a goat and a rooster you could imagine. The movie is multitasking too much at this point, though Michelle Yeoh fans, still flying high on the success of “Everything Everywhere All at Once,” get an extra helping of her here. She plays Master Chow, a martial artist turned acupuncture therapist who helps turn the yellow guys into itsy-bitsy Bruce Lees.

Script-wise, “The Rise of Gru” takes a few too many shortcuts, as with the RZA character, who bikes off with the stone, then hands it over as soon as he’s asked. The movie is missing a scene in which Otto must convince him to give it back. This overly familiar franchise could use a chapter where misguided Gru really does manage to be evil for a time. Instead, everything here is in service of either a laugh or an easy emotional reaction (Balda pulls the Puss in Boots trick of making the Minions’ eyes real big when they’re trying to get their way). Six months into 2022, it’s the funniest film Hollywood has produced thus far. Audiences know what to expect, and Illumination delivers, offering another feel-good dose of bad behavior.