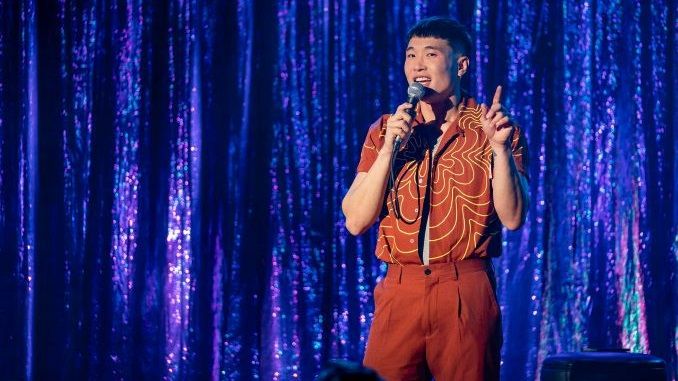 It is never easy to create something and unpack the awareness of creating that thing at the same time. The ideal of it is so appealing: You get the ability to enjoy something that’s made to transport you, but you also get that sense of privileged, look-behind-the-curtain insider information about how the sausage gets made. The problem is that they’re opposing impulses. To do both things at once, without letting one task overwhelm the other, is like holding two repelling magnets at just the right position: When it does work, it’s like something is being briefly suspended in midair, contrary to everything you know about how gravity is supposed to work. There are stretches of Joel Kim Booster’s Netflix special Psychosexual where the magnets wobble a little — bits where the effort of doing stand-up feels mostly in service of a metatextual point Booster is trying to make. Fairly often, though, the magnets hold. In those moments, Psychosexual feels buoyant and alive.

The majority of Psychosexual is designed to achieve all the things a comedian’s first major special needs to achieve. Booster is introducing himself as a comedic sensibility, and there’s material about being Asian, being gay, being adopted, sex, drugs, relationships. There’s even a long section on cats versus dogs, a topic so well worn that even introducing it feels like a bit of a joke. (He pulls it off, though, particularly once he zeroes in on dogs as tools of the police state.) The joke-monologue portions have the rhythm of solid reliability, and Booster performs them like they are almost a bit too comfortable, like they are old standbys. That rhythm of warm comfort is at odds with the lighting design and setting at L.A.’s Catch One, which is so dark and engulfed by deep navy tones that it approaches film noir, often throwing Booster’s face into deep shadow. Occasionally there are gorgeous shots where his face glows or is limned by lovely backlight. Just as frequently it looks like someone’s mom is about to yell that he needs to turn on a light, for Pete’s sake, you’ll ruin your eyesight!

Psychosexual’s larger conceit reveals itself in Booster’s deployment of crowd work, where the tone shifts away from the relaxed stand-up mode and into excited discomfort when the audience realizes they are part of the show. After a warm-up round of introductory jokes (P.F. Chang’s; code-switching; the existence of Boise, Idaho), Booster turns to the audience and asks who in the crowd knows his work, and who is there despite having no idea who he is. From that second group, he selects a straight white guy named Ben and starts interrogating him. “Here’s the thing,” Booster says. “I know exactly what you were thinking when I walked out onstage tonight. You were like, Oh great, here comes this gay, Oriental comedian.” Booster repeats it several times until the audience is cracking up at the phrase “gay, Oriental comedian” and then unveils the bigger point: Straight white men, he has found, complain that Booster’s comedy is not relatable because it’s too focused on being gay and being Asian. “That is not what I want at all!” he says. “I want to be a comedian that appeals to all demographics.” Then he pulls out the punch line while pointing back to his selected straight white male audience member: “Especially the most important one!”

The idea, as Booster explains, will be to check back in with this particular white dude throughout the show, to see how he’s feeling and whether he’s found any of the jokes to be relatable. He’ll be a representative for all straight white men — if a joke works for this dude, that means it’ll play for everyone like him. Booster then proceeds through his set doing exactly what he said he’d do. His first section is full of jokes about being gay and Asian, something Booster explains is there so that the people who’ve come because they want their lives to be reflected onstage feel like there’s been material for them. Then he checks in with Ben: Did he find those jokes alienating? Was there one he particularly disliked? Fear not, Booster promises, because the next set of jokes will be more appropriate for Ben. The next stretch is, yes, the jokes about cats and dogs, and also a section about the pluses and minuses of various drugs. Then another check-in: Was that better for Ben? Did that feel a little more comfortable?

The idea Booster’s playing with is both simple and effective. He is frustrated by the sense that a joke about his identity or his specific experience is cast as niche, as comedy that’s only meant for a particular audience because it isn’t relatable for anyone who is not Asian or gay or male or ideally all of those together. It’s unfair to describe comedy by straight white guys as “universal” while material from queer people, women, and people of color is “not relatable.” The crowd work is ideological work, a way for Booster to acknowledge the implicit checklist of all the things this special is supposed to do while also pointing out the annoyance of needing to be a role model: do the comedy while examining the task of comedy; represent gay Asian men while unpacking the task of representation.

It’s a lot to stitch together, and not all of the edges are tucked in neatly. It’s fun when Booster does crowd work, and not all of it is the running thread of his chosen white guy. The strongest stretch is a short interaction about Asian racism. But the trouble with crowd work is that sometimes it does fizzle, or at the very least, it can’t always achieve the desired sense of shock. There’s a fun interaction with a monogamous couple, but it doesn’t ratchet up as much tension as Booster seems to want it to.

The note Booster arrives on by the end of the special is a declaration: He simply wants to be an entertaining stage dummy. That may well be true, but producing an entire special that performs an elaborate metatexual dance with the idea of doing a first comedy special does somewhat undermine the insistence that he’s just a hot gay comedy goof. As a dramatic conclusion, though, it’s a bit of a letdown after the more surprising, prickly moments of introspection earlier. Nevertheless, the gambit largely pays off. Booster introduces himself and defines a comic identity that stems from but also pokes at his sexuality, ethnicity, and gender, and the crowd work is a tool used in the service of the special he wants to create. He gets to perform the specialness while also questioning the assumptions of that performance. But it is a relief when the conclusion is not a meta one, and when Booster shifts back to close with a silly joke about what a role model actually means to him. It means a gay guy kicking straight men out of a gym steam room — the kind of relatability Booster is happy to celebrate.