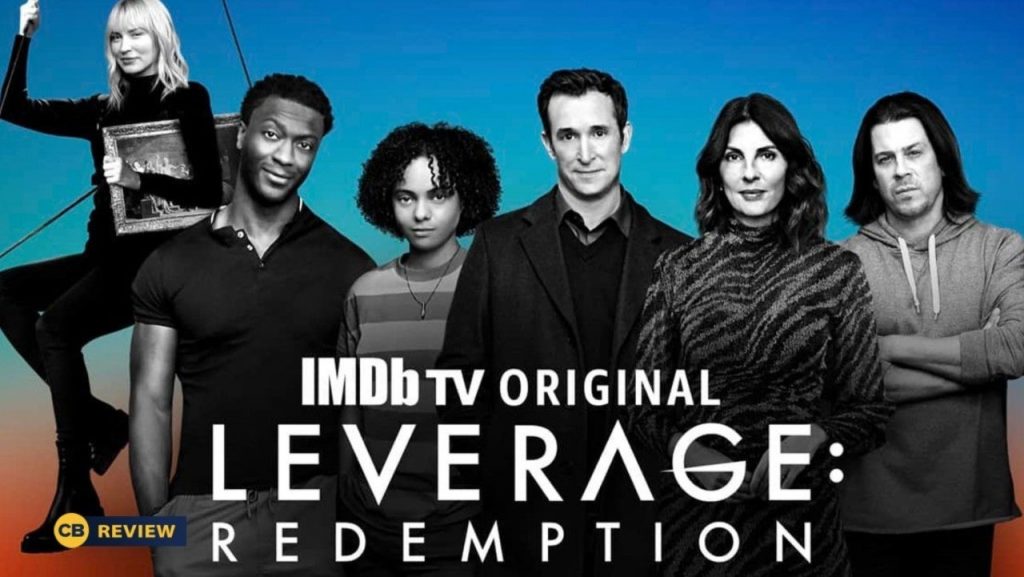 Leverage: Redemption is an IMDb TV original series based on the TNT series Leverage, created by John Rogers and Chris Downey. Rogers and Downey return as consulting producers and writers alongside executive producer Dean Devlin. Genius hacker Alec Hardison (Aldis Hodge), rough-and-tumble ‘fixer’ Eliot Spencer (Christian Kane), and expert thief Parker (Beth Riesgraf) reunite with grifter Sophie Devereaux (Gina Bellman) on the anniversary of their leader Nate Ford’s death. However, seeing that the world is still full of the same injustices that they banded together to fight, the team decides to reform to tackle these injustices through various cons and heists.

Revivals of highly popular and/or cult TV shows are a tricky thing. Not only are you hoping to reel in dedicated viewers of the original series, but you also have to consider how the world changed in the years since your show went off the air. Some revivals, like Rugrats and iCarly, manage to thread that needle with ease. Others, like Heroes Reborn, fall victim to the worst tropes that plagued their original incarnations. I’m happy to report that Redemption falls into the former camp. Hodge, Kane, and Riesgraf slip into their roles like a well-worn coat, and the series manages to navigate the perils of modern-day life and the absence of original series lead Timothy Hutton. As a fan of the original Leverage, I was glad that the cast and crew managed to keep the same vibe while still being relevant in this day and age.

For example, Hardison has launched a new organization on his own to provide international relief and support for those who need it. Parker, who struggled with fitting into society in the original series, is finally going to therapy. There’s a hilarious twist concerning her therapist that I don’t want to spoil but perfectly fits Parker’s vibe. And Eliot gets the chance to prove that he’s more than “the guy who hits things.” Perhaps the biggest surprise comes from Bellman’s Sophie, who steps into the leadership role following Nate’s death. Not only is this a great way to address Hutton’s absence, but it also adds a fresh perspective as Sophie leads the team in a different way than Nate did.

Redemption introduces two new characters: the first of these is Noah Wyle‘s Harry Wilson, who joins the team in its premiere episode “The Too Many Rembrandts Job.”  Harry was a corporate lawyer/fixer who used his knowledge of the law to help corporate businessmen wriggle out of various situations. He joins the Leverage team seeking to redeem himself for his past actions. Wyle, who previously worked with Rogers and Kane on the TNT series The Librarians, brings his trademark charm and wit to Harry and plays the character with a running undercurrent of sadness. Harry also learns various skills from the team over the course of the series’ first half, including fighting skills from Eliot and grifting skills from Sophie.

The second character is Hardison’s younger sister Breanna (Aleyse Shannon), who is a gifted hacker in her own right. Unfortunately, Hodge’s growing role in Hollywood productions, including Black Adam, means that Hardison is absent from a few episodes. Thankfully, Shannon’s performance makes up for this absence and infuses Breanna with razor-sharp intellect and an iron-clad sense of righteousness, the latter of which is tied to real-world events. “I’ve lived through endless war, two economic collapses, and the return of actual nazis,” she tells Parker during a scene that hit home in all the right ways. Like many audience members, Breanna has been through a lot in her life, and it’s admirable that she’s resolved to help others.

It wouldn’t be Leverage without inventive heists, and Redemption pulls off some very clever ones. From attempting to heist the entirety of a luxury apartment in “The Tower Job” to flipping the script on a pair of real estate scammers who convince a woman her house is haunted in “The Paranormal Hacktivity Job,” there’s quite a variety of cons and heists to be had. However, my personal favorite heist came in “The Card Game Job,” which involved a collectible card game and the Leverage team taking down a pharma bro. As someone who is not a fan of pharma bros, particularly Martin Shkreli, but a fan of card games like Yu-Gi-Oh! and Magic: The Gathering, it felt like this episode was made for me.

Leverage: Redemption is the gold standard of what a TV show revival should be, managing to reunite its original cast and apply the same series premise to a modern-day setting. Fans of the original Leverage series will definitely want to check it out, as it perfectly blends everything they loved about the original series with new and timely elements.

The first eight episodes of Leverage: Redemption will be available to stream on IMDb TV via Amazon Prime.