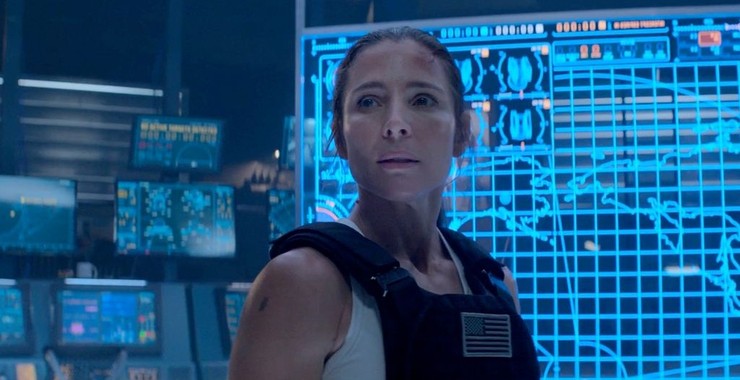 “Interceptor” is one of those action movies where you sorta know what you’re going to get before seeing it. There’s just enough in the trailer to (despite your better judgement) give you hope. And since movies like this can be a lot of fun, you go in optimistic. But then you see it and you remember why you were hesitant to begin with. It may be a movie you want to root for, but it’s just too silly and trite to get behind.

Directed by Matthew Reilly and produced by Chris Hemsworth (who also has a brief tone-shattering cameo that milks his likable goof persona dry), “Interceptor” starts off on the wrong foot. The ridiculous setup goes something like this: The US has only two early warning stations that can detect and shoot down nuclear missiles (we’re doomed). They’re called Interceptor bases. One is at the icy Fort Greely in Alaska. The other is a seaborne platform called SBX-1. Text tells us that SBX-1 is 1500 miles northwest of Hawaii but its exact location is “classified” (because, you know, audiences might tip off the Russians and we don’t want that).

A generic terrorist group takes command of 16 (!!!) Russian nuclear missile installations with the intent of destroying 16 U.S. cities. But they’ll need to knock out America’s defense systems. First they wipe out Fort Greely. That leaves SBX-1 as the lone deterrent. But wouldn’t you know it, the terrorists have infiltrated the platform. Posing as janitors, the semi-ruthless Alexander Kessel (Luke Bracey) and his blank-slate henchmen have plans of taking over SBX-1.

But he didn’t count on Captain JJ Collins (Elsa Pataky of the “Fast & Furious” series). Transferred to the undesirable SBX-1 following a sexual assault cover-up by the military, JJ is promptly welcomed to her post in “the middle of nowhere” by Kessel and his mercs who attempt to gain entry into the control room. But JJ fights them off, sealing herself and the antsy Corporal Shah (Mayen Mehta) inside. In one of the more hilarious details, JJ radios for help but is informed that reinforcements to one of America’s most crucial defense stations is 90 minutes away.

Surrounded by an endless horizon of ocean and no help in sight, our hero must “hold the room” and fend off the terrorists until backup arrives. Along the way we’re fed a steady diet of silly one-liners and cringy dialogue (“We’re the only thing standing between America and Armageddon.”). The characters don’t fare much better. Pataky has a good action presence and has the physicality for some really good fight sequences. But too often she’s handcuffed by some truly awful lines. To her credit she does keep the film watchable, but putting the whole thing on her back is too much to ask.

The villains are dealt far worse hands. Bracey tries to deliver charisma and danger but he’s only slightly menacing. Again, it’s the script that hangs him out to dry. He’s handed such an uninteresting antagonist who probably seemed better on paper than on screen. Both Kessel and his cause are hard to buy into and eventually spills over into absurdity. And at times you can’t tell if the filmmakers are on his side or against him.

Yet, “Interceptor” somehow manages to hold your attention. Lots of it has to do with Pataky who earns our sympathies. Not so much for the terrorist threat her character faces, but for the task she’s given of making a really sub-par script entertaining. It’s an impossible undertaking yet she gives it her all. And because of her effort and the countless number of unintentional laughs, the film isn’t the unbearable experience it easily could have been. “Interceptor” premieres June 3rd on Netflix.