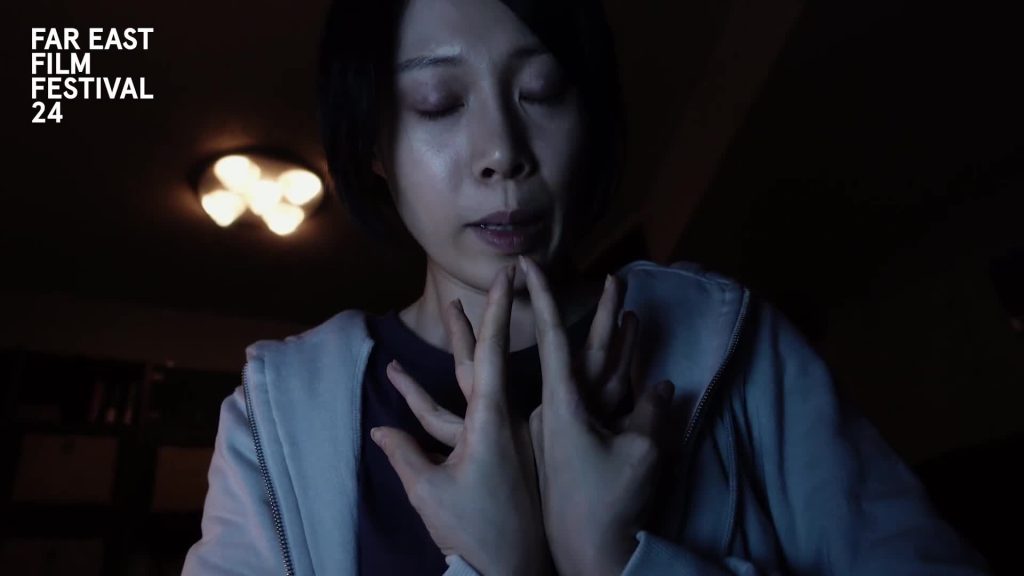 Horror films shot using “found footage” techniques are typically designed to be more unsettling than frightening. Given their propensity for displaying dreadful imagery in a (hopefully) realistic fashion, they captivate by making it easier for the audience to suspend its disbelief. Netflix’s Incantation does a decent job in this regard; its eerie atmosphere and convincing performances elevate what would otherwise be a run-of-the-mill feature.

Directed by Kevin Ko, Incantation follows the story of Li Ronan (Tsai Hsuan-yen) as she struggles to protect her daughter Dodo (Huang Sin-ting) from an ancient curse. Invoked in part by a misguided desire to explore a forbidden area, Ronan’s life takes a turn for the worse after visiting a secluded mountain village. Camcorders, cell phones, security tapes – video recordings showcase horrific “accidents” abound. Death looms over everyone but Dodo’s fate is especially troubling – so much so, that her untimely demise could be mistaken as a preferred outcome.

Incantation depicts the lengths a mother would go to to regain custody of her child. Though the initial conflict stems from a supernatural encounter, it’s the need to provide a stable home in the midst of personal turmoil that anchors the film thematically. It would be tough for anyone to establish a relationship after a long period of separation, and that’s before considering whether or not being a parent was the right choice given the circumstances; is Ronan’s devotion to her daughter a reflection of her unconditional love or an overwhelming sense of guilt? There’s a humanizing element here that proves to be relatable even during the wildest of events.

This relatability is further established by segments that are void of horror. Tsai Hsuan-yen shines as Ronan, her plight made real thanks to a strong performance. It’s the mundane moments that really sell her character, though. Intimate in nature, these brief instances tend to offer up important auxiliary information that color later events. Certain revelations are only impactful because of how well Incantation’s characters are developed. The same goes for the rest of the cast. Huang Sin-ting effectively portrays Dodo while Kao Ying-hsuan, who plays caregiver Chi-Ming, is certainly believable. There’s no weak performances regardless of how much or how little screen time they’re given.

Kevin Ko, meanwhile, is deliberate in Incantation’s pacing. Every bit of the runtime is used to develop a fully realized curse; the film is more Noroi: The Curse and less The Blair Witch Project. This approach has mixed results. While drawing out the mystery gives us time to connect with the cast, the slow pace negates some of the fear-inducing scenes. A routine trip to a restaurant might follow a disturbing display of body horror. There are also the frequent cuts to different time periods that happen right before or after scary scenes, leaving us wanting or worse, confused. Of course, that’s not to say we shouldn’t be given moments of respite after witnessing something violent; it’s just that these tonal shifts sometimes betray what is meant to be a terrifying experience.

Thankfully, Incantation makes up for this with an absolutely dreadful atmosphere, playing on the anxiety associated with the unknown. It even alludes to this fear by suggesting that knowing more about Ronan’s plight would lead to a person’s death; the unknown aspects of the curse, when finally revealed, literally cause harm. This means that most of the characters (and to an extent, the audience) are kept in the dark as much as possible. It creates an uneasy feeling that lingers throughout the majority of the film. Suddenly, that connection that was developed between Ronan and the viewer is in question.

The unsettling nature of Incantation also helps when it comes to logic-based inconsistencies. A swelling score during an emotional scene, odd camera switches, or a character’s relentless recording despite nearly dying – basically all of the things that would make Incantation an actual movie and not “found footage” – are somewhat forgivable when it still manages to be as engrossing as it is.

Incantation’s premise is a decent vehicle for a found footage film. Powered by the genre staples, the final destination is readily apparent; even if it takes a little longer than it should to get there, the journey is captured in a familiar fashion. That said, the ride is still engaging thanks to the efforts of a strong cast, relatable elements that ground the story, and a dreadful atmosphere. The outright horror is fine enough. It’s the subtle touches that leave a lasting impression.