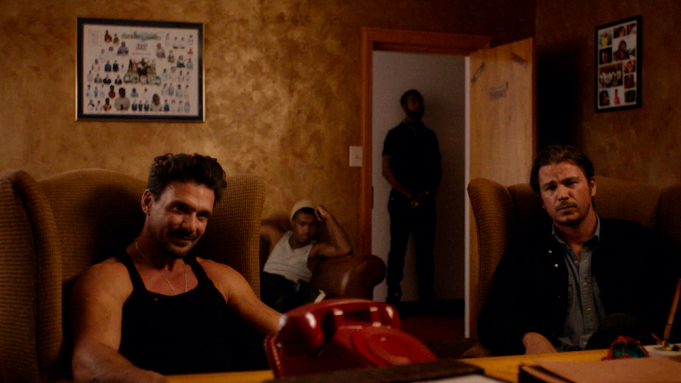 Mama’s in the slammer but she’s running the show in “Ida Red,” a proficiently made crime family drama that sees director John Swab return to his Oklahoma roots. Consciously seeking to emulate action/crime films by Michael Mann, William Friedkin and others, Swab strives so hard to deliver a similar product that his film has no distinctive DNA, and the flawed script wears its influences rather conspicuously, with significant nods to James Gray’s oeuvre, “Animal Kingdom” and any number of Ma Barker offspring.

Headlining Josh Hartnett, with Melissa Leo and Frank Grillo returning to the director’s fold, the film premiered in Locarno’s Piazza Grande section on the heels of Swab’s “Body Brokers” this past February. Good performances and a plot that generally holds the attention could draw audiences, yet success for this Saban Films acquisition will very much depend on finding ways to distinguish it from a full landscape of generically similar-sounding features.

Tension is high at the start as a truck carrying pharmaceuticals is pulled over at night by Wyatt Walker (Josh Hartnett) and his uncle Dallas (Frank Grillo), disguised as policemen. One of the drivers gets suspicious, pulls out a gun, and the bullets fly. Cut to visiting time in the clink, when Wyatt drops in on his mom Ida (Melissa Leo), serving a long sentence for unspecified criminal activities. She’s always happy to see her baby boy, mixing the general catch-up with coded messages about the heist and getting rid of loose ends in the form of witnesses.

On the surface, Wyatt seems like a right nice guy. He’s a family man, always taking time out to spend with 15-year-old niece Darla (Sofia Hublitz), though her mom, Wyatt’s sister Jeanie (Deborah Ann Woll), works hard to shield her daughter from the family business. That’s a world Jeanie rejected long ago, probably even before she married Bodie Collier (George Carroll), a cop who knows his brother-in-law is involved in seriously shady affairs. The truck stickup falls under federal jurisdiction, so laconic gum-chewing FBI agent Lawrence Twilley (William Forsythe in a role ripe with clichés) joins forces with Bodie to investigate.

Wyatt’s relaxed, friendly image is in full contrast with Dallas, an edgy, trigger-happy psychopath getting a charge out of doing the family’s dirty work, like smothering the surviving driver in ICU. When searching for Jay (Beau Knapp), a wingman during the heist, Dallas blows the guy’s brother’s brains out before sadistically teasing Jay’s girlfriend (Cara Cox) while dancing to a song on the radio, “Promises, Promises” by Naked Eyes (the selection feels bizarrely incongruous, unless you considering its use in “Grand Theft Auto V”). Naturally, at the end of his dance he puts a bullet through her body.

These are difficult times for Wyatt, as Ida is terminally ill and he wants his loving mom out on parole. To ensure the right ruling, he and Dallas kidnap parole board chairman Stuart Prince (Ben Hall), using threats and $100,000 in cash as incentive to ensure Ida will be out of the hoosegow in a week. Before her anticipated release, she passes instructions to her son about a major robbery that’ll net the family enough dough to retire on easy street.

Swab’s script puts a lot of emphasis on family relations yet sloppily makes numerous leaps that remain unexplained, such as why Ida remains such a lynchpin in Tulsa’s criminal activities, even from prison. A major revelation about Darla is dropped in without elucidation, and attentive audiences will still wonder if they unwittingly fell asleep toward the very end when the film fails to connect a few important dots. And that’s not even asking what Madonna’s “Crazy for You” is doing accompanying a holding cell suicide.

The film’s unevenness is especially evident in what’s meant to be the grand set-piece, when the Walker boys attempt their most spectacular stickup leading to a melee in downtown Tulsa. After the not-terribly-clear buildup it should feel energizing, yet it’s strangely both rushed and empty: The city is practically devoid of cars and people, including in the offices, leading audiences to distractingly wonder if the production just couldn’t afford extras.

What holds “Ida Red” together and gives it solidity is the relationships between Wyatt, Jeanie and Darla, which might not be entirely original but they don’t need to be thanks to good ensemble performances, with Hartnett very much at ease and Hublitz making an impression in her biggest role to date. Leo gets one major monologue when Ida goes before the parole board, allowing her to show off her attention-getting skills. Camerawork is in line with action films of the ’80s and ’90s, complete with an over-reliance on music driving the action forward, while scene transition wipes using horizontal and vertical lines fits with Swab’s indebtedness to ’60s and ’70s stylizations.