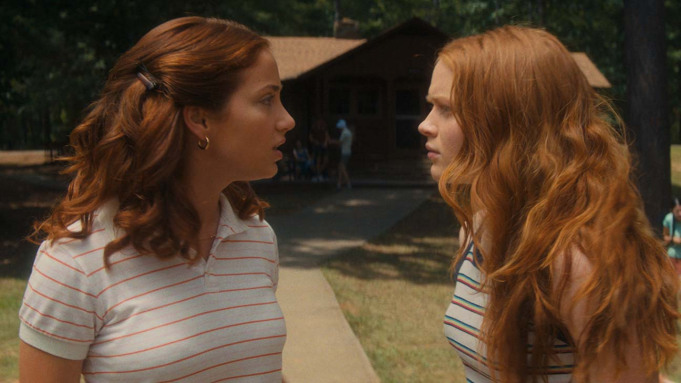 Though it’s rare to describe a slasher series as ambitious, the “Fear Street” project qualifies: a trilogy of films released in consecutive weeks that come together and form one complete story. It’s hardly uncommon for horror movies to get the sequel treatment, but it is rare for an entire franchise to be planned in advance — especially as each installment in this three-part adaptation of R.L. Stine’s novels goes further back in time. “Part 2: 1978,” the second chapter in the series, is less accomplished than “Part 1: 1994” but compellingly sets the stage for “Part 3: 1666” nevertheless.

Picking up immediately where its predecessor left off — which is to say, 1994 rather than 1978 — the middle entry deepens the Shadyside/Sunnyvale mythos before going back in time and telling its part of the story. The rest of the film takes place at Camp Nightwing, where youths from both prosperous Sunnyvale and supposedly cursed Shadyside smoke weed, have premarital sex, and become possessed by the one-handed 17th-century witch responsible for centuries of bloodshed in the area — you know, normal summer-camp things.

“Part 2” makes a number of explicit references to Stephen King and takes on a vaguely “It”-like quality at times, as though the very concept of evil lays not-quite-dormant in a moss-covered grave and periodically brings violent misfortune upon those in its vicinity. Though never quite rising to the level of its most overt influences, the film is lent a certain gravitas by the sense that all of this has happened before and will undoubtedly happen again.

Decades of slasher movies have conditioned us not to grow attached to their characters, most of whom are expendable fodder for whichever baddie is picking them off, but “Fear Street” inspires more of a rooting interest in its endangered teens than most of its genre forebears. Here, we actually care about sisters Cindy and Ziggy Berman (Emily Rudd and Sadie Sink, respectively), one of whom takes on the role of traumatized survivor dispensing wisdom in the 1994 timeline, as Cindy’s mild-mannered boyfriend falls under the thrall of the witch’s curse and starts offing campers with an axe.

All three “Fear Street” flicks were co-written and directed by Leigh Janiak, who has the difficult task of balancing the source material’s teenage sensibility with the rated-R trappings of “Friday the 13th,” “Sleepaway Camp,” and other slashers. Far from brain-dead stoners being punished for having sex, her characters are precocious, genre-savvy teens whose intelligence has also made them world-weary. In that sense “Fear Street” is kin to MTV’s overlooked small-screen adaptation of “Scream,” two episodes of which were likewise helmed by Janiak, with both series suggesting that there’s no reason slashers can’t adapt to a more 21st-century mindset — even if both are ultimately more interested in alluding to the past than influencing the future.

Ultimately, there’s a kind of distance between viewer and character that wasn’t present in the first film, likely because “Part 1” revealed several of their fates before “1978” introduces their younger selves. We know that one of the Berman sisters will live, know that the witch’s bloodlust won’t be sated on this night, and know that the do-gooder camp counselor will grow up to be sheriff. “Part 2” can’t help feeling like the middle child it is, bridging the gap between its two siblings without being afforded the chance to stand on its own.

But being referential isn’t the same as being clever, and much of the gore seems intended to prove the movies’ R-rated bonafides rather than to actually serve the narrative. Close-ups of lopped-off heads and scenes in which campers are caught having sex feel as though they were included not because the story calls for them but because genre fiends expect such thrills. “Fear Street” in general and the 1978 chapter in particular are at their best when forging their own path, which makes it a shame when they’re too reluctant to walk it.