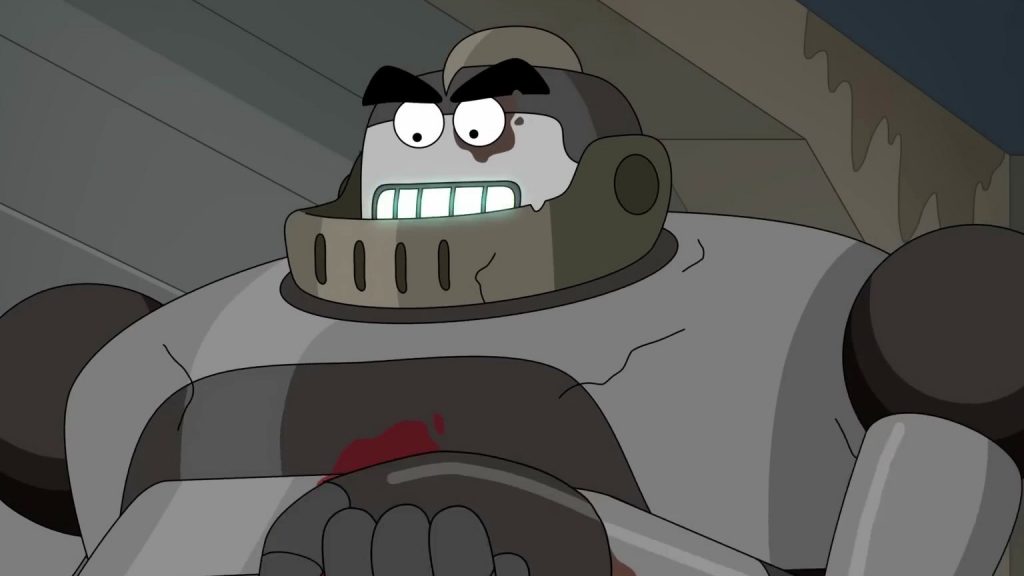 The person telling that story, even the part where he talks about facing his archenemy Bazarack (Dana Snyder) and giving him a violent catheterization? Renzo himself, to a bored class of students, one of whom wonders if this is an episode of Futurama or Rick And Morty. “My answer is shut the fuck up,” he yells to the kid as he flies through the wall on a hovering Jet Ski.

Renzo’s life isn’t as glamorous as he makes it out to be. He’s married to the much older Queen Flammy (Grey DeLisle), who demands sex at least once or twice per week (lets just say he has to put out a fire down there after doing the deed), and their son Fichael (Snyder) is basically a kidult who wants to be a general. But for his 30th birthday Renzo finally gives him a task force to lead, called the S.H.A.T. Squad.

In the squad is the human-turned-robot Scootie (Jerry Minor) who snorts cute fluffy drug animals and still has his flesh-and-blood manhood; conjoined twins Mal and Val Skullcruncher (Kari Wahlgren), one of whom is an embittered warrior, the other a preschool teacher; Barry Barris (David Kaye), a top scientist with a multitude of personal problems; and Billy (Snyder), a Russian-accented creature Barry made from spare human and animal parts who whacks off when he feels any strong emotions.

After finding out that he’s never left the bubble of the humans’ gleaming city, Fichael takes his squad outside the bubble to face Bazarack, but when they get there, he finds out something about the “alien invasion” and his father’s role in it that’s surprising and more than a bit disturbing.

Just like they did with Paradise PD, Black and O’Guin somehow manage to bury the decent story that drives Farzar under an avalanche of “fucks” and genital jokes.

Even though we didn’t laugh once during the first episode, we could recognize that the story that the creators put together could stand on its own; when Fichael finds out that the humans, including his dad Renzo, were the evil invaders who played volleyball with the natives’ heads, his whole view of his existence changes.

With a different creative team — like the ones responsible for the aforementioned Futurama and Rick And Morty — that story would get room to breathe and explore, with sight gags and wordplay mixed in with real character-driven humor. But we just don’t think Black and O’Guin are capable of that. They have seemed to follow the Seth MacFarlane formula of piling gags upon gags upon gags, then layering on a thick icing of dick and pussy jokes. \

Do we learn about the characters at all in the first episode? A little. We actually liked the scene where Scootie is laying on a pile of crushed Snuffle Snacks high as a kite while the rest of the group is being swallowed by a multi-tentacled monster. If there were more sight gags like that, ones that are built from something already established about a character, Farzar would be a whole lot better than it is.