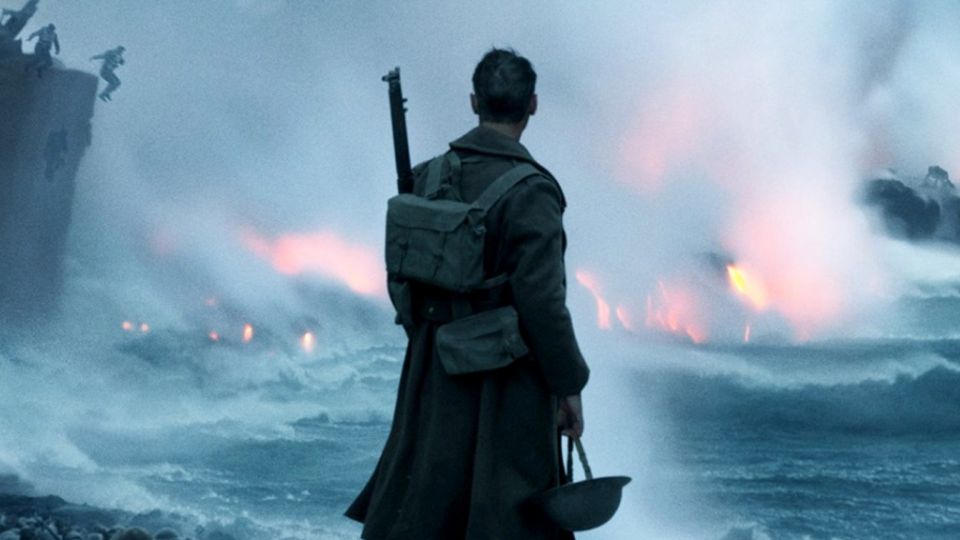 Christopher Nolan has always struck me as a very talented film-maker, and most of his films are ones that have impressed me a lot. Even weaker efforts, where his ambition can get in the way, have a good deal to admire. His films are all impeccably crafted technically, and often entertaining and thought-provoking, also knowing how to get good performances out of talented casts.

‘Dunkirk’ had me interested in it from the get go. Not just because Nolan was the director, though he is to me one of the “appreciated” directors than a personal favourite, and, while all his films range from decent to outstanding, again from personal opinion only ‘Memento’ is a film without faults, so like him and his films but don’t consider them the best thing since sliced bread. There was also the involvement of Hans Zimmer, who has penned some great scores (both in his collaborations with Nolan, being a regular, and elsewhere) and a cast that includes Mark Rylance, Kenneth Branagh, Tom Hardy and Cillian Murphy. Plus ‘Dunkirk’ was based off one of the most disastrous events in British wartime history, actually cited by Winston Churchill as “a colossal military disaster”.

Seeing ‘Dunkirk’, after hearing a lot of acclaim but also a lot of divisive opinions on both sides, there was a lot to admire about ‘Dunkirk’ but, although it is a visual, technical, audio and directorial masterpiece, it is not the triumph of film-making it could have been. As far as Nolan’s films go for me it’s a lesser effort, meaning often impressive but flawed where ambition gets in the way of execution, feel exactly the same way about ‘Interstellar’ which has similar strengths and flaws to ‘Dunkirk’. Personally do feel strongly that regardless of how disappointing it would have been to others it is a long way from a 1/10 film, even if the film didn’t do much for me it would have gotten a 4 at least from me.

Let’s start with the strengths first. First off, ‘Dunkirk’ looks amazing, so far being one of the best-looking films of the year. Very evocatively designed, atmospherically lit and the cinematography is dazzling with some grit but also some audaciousness. Nolan’s direction is often superb, especially in the very visceral spectacle, and on an audio level it is just as big a triumph. The sound is constant but didn’t bother me, coming from somebody who can have hyper-sensitive hearing but is used to loud noises and high volume (necessary for the experience) when going to the cinema. If anything it added to the authenticity.

Hans Zimmer’s score has garnered a lot of praise, acclaimed from most in part, but has had some dissenting opinions. Count me in as someone who loved it, there is an ominous quality but also a pathos and rousing bombast that enhances the pulsating heart-beat.

The action is often enthralling, and there is some nerve-shredding tension and some heart-wrenching emotional pathos (like in Cillian Murphy’s performance). Loved the performances as well, the best coming from a quietly dignified and understated Mark Rylance who can say little and still speak volumes with just a small gesture, his eyes and his facial expressions. Kenneth Branagh’s role is not a large one but he does make much of it. Nolan regulars Tom Hardy and Cillian Murphy command the screen effortlessly, Murphy’s shell-shocked soldier in particular is genuinely moving. Was absolutely shocked in a good way at how good Fionn Whitehead’s and Harry Styles (on paper an insane casting choice) feature film debuts were.

On the other hand, what makes ‘Dunkirk’ less than triumphant is that the characterisation, writing and story are on the messy side. Didn’t mind the minimal dialogue and understood completely why it was done, did mind that the characters were underdeveloped and severely lacking in depth, one never gets to know them which is a shame because the acting is so good.

‘Dunkirk’ has been criticised for being emotionally cold and not getting enough into the horrors of war. Do agree with those criticisms actually. There are times actually where both actually come through, there is tension and suspense, there are some harrowing moments and some poignant ones, but we don’t want moments, we want consistency. ‘Dunkirk’ is not horrifying or gut-wrenching enough (for war films it is fairly tame) and does lack consistent emotional investment.

Nolan could have done more with the historical side of things, it is a good thing that a good deal of people here have knowledge of the event but it can’t be assumed that everybody knows about it or all the facts, nobody expects a history lesson but there was a missed opportunity in this regard. While being a technical and visual masterpiece, some of the editing is chaotic in places, as an epileptic it was just about bearable but still felt too much even for what it was trying to do. Lastly, while having a non-linear structure is not a bad thing (Nolan did it with ‘Memento’ and masterfully) how the three stories were told did get confused at times and it was hard keeping up with the constant back and forth.