David and the Elves 2021 Movie Review
Skip to content 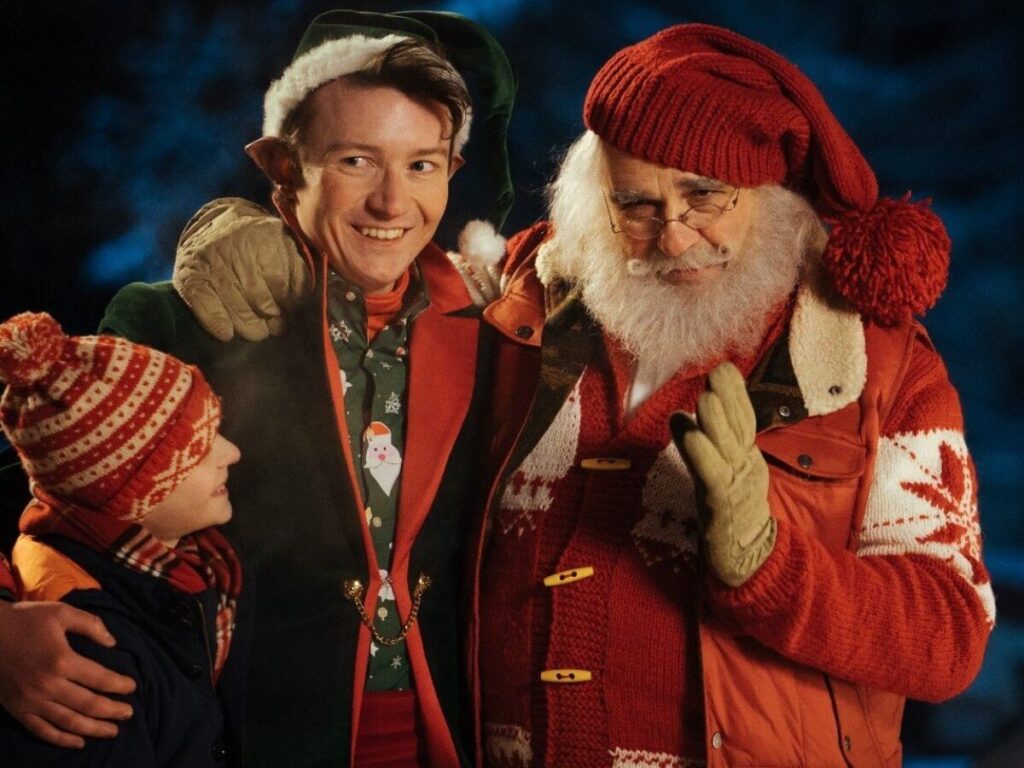 David and the Elves 2021 Movie Review

CHRISTMAS EVE. THE NORTH POLE. 2300 HOURS. Santa (Cezary Zak) and Mrs. Claus (Monika Krzywkowska) dance to “Beyond the Sea” as their elves scurry hither and thither, getting ready for the big man’s big annual journey. You’d think the royal couple might chill their happy feet and chip in a little elbow grease, but why bother when you have slave labor? The jewel of the elf workforce is Albert (Jakub Zajac), who’s been EOTY for several years running, and is so popular, he has his own action figure. He even gets to chauffeur the boss around in his sleigh every year for the holy distribution of presents.

Meanwhile, in the Polish Tatra Mountains, a happy family happily chucks snowballs and sings carols and sits down to dinner and all that. The important people to this plot are David (Cyprian Grabowski) and his parents, Piotrek (Michal Czernecki), who’s a kid in a man’s body, and Hania (Anna Smolowik), who has no discernible characteristics. It’s their last rural Xmas, because Mom and Dad got new jobs and they’re about to move to Poland’s bustling cultural center, Warsaw. While cavorting through the gorgeously starlit mountainside, Dad points to a blank spot in the sky and prompts David to wave at invisible Santa in his invisible sleigh, and if you think he’s full of crap, well, invisible Albert and invisible Santa wave right back, even though it’s pointless because they’re invisible.

Funny, how this movie opens on Christmas, because so many Christmas movies end with Christmas. Don’t worry, though — the narrative skips ahead a year to the next Christmas season, specifically, a few days before Christmas Day. Albert’s Christmas cheer hits a nadir, because, as the most famous elf in the North Pole with an ego to match, he doesn’t like being invisible in the human world. So he ventures to Warsaw, where he’s not invisible anymore for reasons. He wants to visit the kid who waved at him a year ago, and also wreak a little havoc by deploying some of his elf magic, which allows him to snap his fingers and turn a peanut into a drum set, etc. A visit from a mischievous pointy-eared fella is just the thing 11-year-old David needs, because he’s bullied at school for being the new kid, and his parents work too much. Hijinks ensue, although there’s some light peril happening here, because the longer Albert’s away from the North Pole, the more his magic dwindles and the closer he gets to shrinking very small, so small he’ll turn into a figurine. Ready one two three go: I HATE WHEN THAT HAPPENS.

I doubt I’ll stir controversy by stating that Elf is a classic in any honorable household. David and the Elves is Elf in its broad strokes only. This Polish would-be joy-stirrer boasts characters and jokes that are half-inflated like the malfunctioning Baby Yoda Xmas blow-up sagging in your neighbor’s yard. Jokes about Mrs. Claus trying to keep her “Clausey” off the doughnuts and on the celery? A recurring gag where a big white Santa beard keeps appearing on Piotrek’s face, no matter how many times he cleaves the damn thing? A grumpy trucker, sick of Albert’s shenanigans, Wilhelm-screaming face-first into a pond? Dreary stuff, man. Dreary.

I know. I’m being harsh. The movie only tries to be lighthearted family fodder about the magic of Christmas and the wondrous joy of childhood and how important it is to BELIEVE in shit. But it’s redundant, the same old stuff, a loose collection of prosaic moments, too many of which seem superfluous. Edit this 106-minute movie down to the scenes core to the plot, and you’ve got an hourlong TV special, counting commercial breaks. You’d forgive a movie its meanderings if it was actually funny and/or touching, but David and the Elves is content to be as mediocre as storebought nog.

David and the Elves 2021 Movie Review