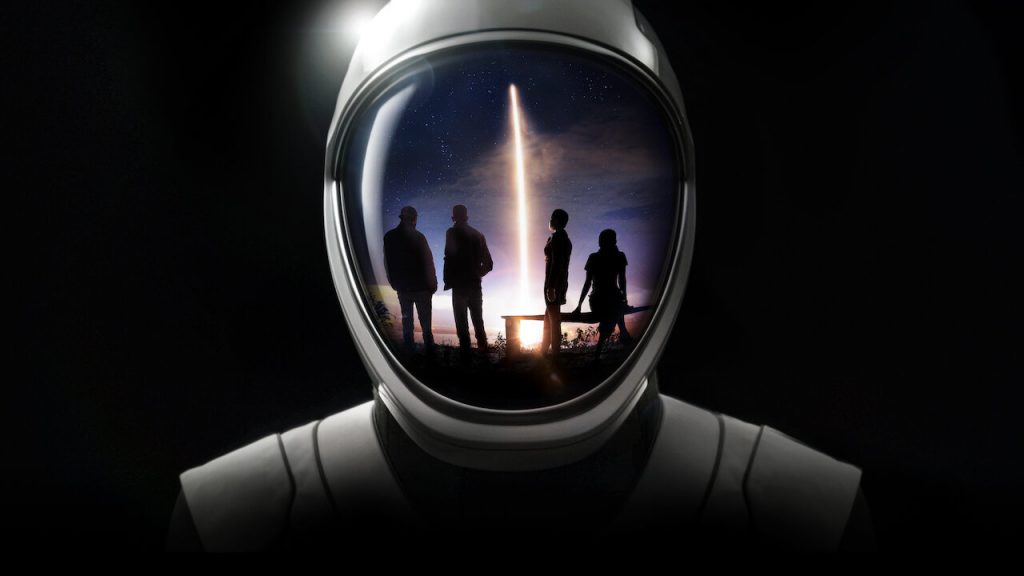 While I’m still able – “allowed” is possibly the verb I want – I would like to register my objection to adverts masquerading as legitimate streaming content on a subscription service for which I pay good money. This is not how that particular model is supposed to work. I realise, of course, that I am Cnut howling at the digital waves. But proving our powerlessness before them is about the only thing left to us.

Netflix’s new documentary series, or “documentary series”, Countdown: Inspiration4 Mission to Space, is the offender in this case. It is designed to track the recruitment process, preparation for and then – in as close to real time as possible – the launch of the first all-civilian flight into space, by Elon Musk’s company SpaceX.

The first two episodes introduce us to the crew in Musk’s Inspiration4 project, but only after we have been thoroughly informed of the greatness of what we are about to witness. Space is “humanity’s great taunting”, and non-astronauts circling the earth in the reusable Dragon rocket is “a hinge moment”. “It is a certainty that we will become a multi-planetary species”, you see, “and this the next significant step.” I hope you are feeling suitably awed and portended upon. If not, there’s plenty more where that came from.

We meet Jared Isaacman, a high school dropout who founded his first company, Shift4Payments – a PayPal type operation that now processes $200bn (£145bn) a year for US restaurants and hotels – from his parents’ basement when he was a teenager. Isaacman is that rarest of beasts – a genuinely personable billionaire – and, when he bought all four seats on the flight, one imagines Musk must have been elated with his charming frontman.

Not that the fact that Isaacman bought the seats is made explicit in the programme. Possibly this is because it is thought so self-evident that it does not need to be. Or possibly not. Much is made of the fundraising side of the endeavour (Inspiration4 aims to raise $200m for St Jude’s children’s hospital in Memphis and Isaacman has already donated half the sum) and the shift from the spirit of national, collective endeavour and investment in space exploration to private individual and commercial businesses is not touched on. The closest we come to any kind of ethical consideration or probing is a single question to Musk about whether we should be looking to solve some of the manifold problems on Earth before looking to the stars, which he is allowed to bat away. “We should spend 99.9% of our resources on solving [them],” he says, which is an intriguing use of “we” and “our”. “The rest can be spent on an exciting and inspiring future … If life is all about problems, what’s the point in living?” So – that’s all sorted, then.

Isaacson acknowledges his privilege more overtly, but the $200m for St Jude’s is clearly considered to cover a multitude of what some might categorise as moral sins.

Never mind. This is all “a profound breakthrough” and everything’s OK because the other seats are going to ordinary people, albeit ones who fit the “Mission Pillars” of Hope, Generosity, Prosperity and Leadership. The inclusion of this emetic element is not the programme’s fault, at least. It is America’s.

Isaacman, who offers the most nous, has masses of flight experience under his belt and serves as flight commander, representing Leadership. Doctor’s assistant and childhood cancer survivor Hayley Arceneaux, who was treated at and now works at St Jude’s, is in the Hope seat. Christopher Sembroski, who donated as part of the fundraising raffle, is Generosity (though perhaps this should also be in recognition of the friend who actually won and gave Sembroski his seat. This is not mentioned in the programme, which – as mentioned – is in search of a simple, streamlined narrative at all times. The seat transfer may be inconsequential but you wonder how many more awkward facts might have been left out). The final seat, Prosperity, went to Sian Proctor, geology professor and major in the Civil Air Patrol (another fact that’s glossed over, lest it seem, perhaps, that these ordinary Americans on the first civilian mission do not seem to the public quite as ordinary or civilian as they might).

I’m sure the puff nature of the piece will become less obvious as the launch approaches and genuine drama and tensions start to fill the hours. But that doesn’t alter what it is. Everyone’s time and money, all those billions of it, could be better spent.