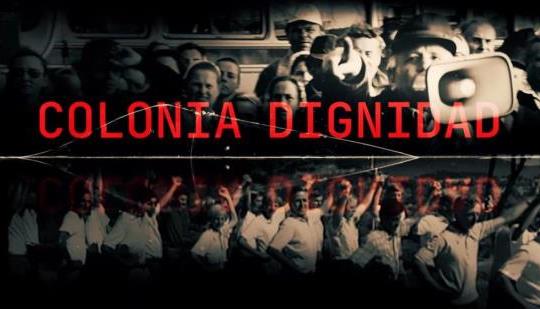 A SINISTER SECT: COLONIA DIGNIDAD on Netflix is a true-crime documentary series. This time, we’re dealing with a religious sect. A German sect based in Chile from the 1960s. The crimes are many and brutal. Read our A Sinister Sect: Colonia Dignidad series review here!

A SINISTER SECT: COLONIA DIGNIDAD is a new Netflix docu-series in the true-crime subgenre. In this Netflix documentary, you won’t be hearing about a serial killer, as is so often the case. No, this time around the subject is a religious sect. Originally based in Germany, they end up building their base in Chile.

In fact, this docu-series is also a German and Spanish co-production, which seems very fitting. We get to hear from many people who were in this religious sect, so it’s all about first-hand accounts. And also historical facts that are widely documented. Exactly how I like my documentaries: Focused on facts and details from people who lived through it.

Continue reading our A Sinister Sect: Colonia Dignidad series review below. All six 45-minute episodes are out on Netflix now.

Torture in the name of God

Watching this documentary, we obviously know as viewers that this was a brutal religious sect and not a loving commune of happy Christians. In fact, it seems more like its leader was a Nazi who used God as he saw fit. The leader of “Colonia Dignidad”, Paul Schäfer, even sounds like Hitler. Something that others also point out – even to his face!

Before he became the leader of a sect based in Chile, Paul Schäfer continuously got into trouble because he could not keep his hands off of young boys. And yes, we’re talking about children and do hear from several survivors in this docu-series. First, this happens in Germany and once there’s a warrant out for his arrest, he travels to find a new place to call home.

Ultimately, he ends up in Chile, where he is very literally welcomed with open arms and given land! Yeah, it’s pretty insane but somehow also very believable if you’ve ever watched any documentaries on cults before.

Hope and love in the face of pure evil

The stories you’ll hear from survivors almost sound like something from World War II at times. Punishment and torture used as a way to keep people in check, while trying to put on “a good face” are so unimaginably cruel. You’ll hear stories of escape and fighting spirit that can’t help but inspire.

In fact, many of the stories we get to hear in this documentary could be turned into really solid movies. The only problem would be that you almost can’t believe they’re real. Except in this docu-series, you see and hear the real story directly from the actual survivors.

Also, you’ll see that many survivors have found love and happiness later in life, which is a necessary spark of hope in this darkness. Don’t get me wrong; They are clearly marked for life. But they have one another for support. The older couples often consist of people from the colony, who weren’t allowed to be together.

Now, they look at each other with actual heart eyes as they flirt and smile. In between talking about the brutal and violent experiences they also share, mind you. It’s almost too much, but also absolutely spot on!

This Netflix documentary series is an important one to watch. For one, because these cults still exist. But also because we have to recognize that evil does exist in order to do something about it. Including helping survivors.

The crimes performed “in the name of God” are vast and extremely brutal. And while this docu-series is obviously very different from the new Mike Flanagan series Midnight Mass, I still couldn’t help but draw a parallel to that one. Mostly because the followers are in a secluded area and because their leader speaks in a very aggressive manner.

In other words, if you’ve watched Midnight Mass, then this documentary just might be even more intriguing with that as a backdrop. The events taking place in the real world somehow always manage to be even more violent and sinister than any fiction.

The six episodes of A Sinister Sect: Colonia Dignidad are extremely well produced. For once, and unlike Monsters Inside, there are plenty of stories to fill six episodes. If you find there true-crime documentaries about cults and sects as intriguing as I do, then be sure to check out this one on Netflix. It is definitely one of the best I’ve seen!

A Sinister Sect: Colonia Dignidad is out on Netflix from October 1, 2021.