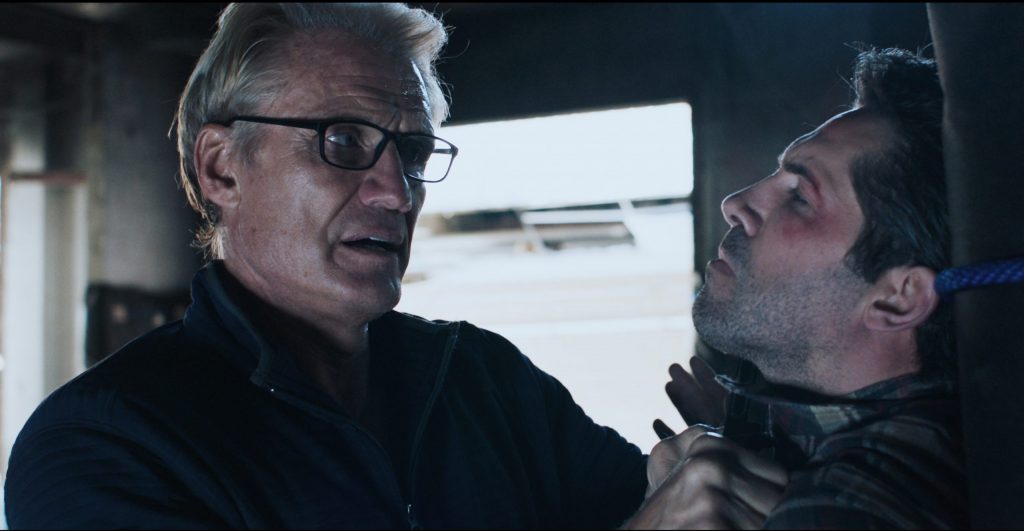 Dolph Lundgren is back in the director’s chair, putting together this sturdy and efficient action/thriller.  It’s been ten years since he has directed (Icarus was his last project in 2010) but, from my scant memories of Missionary Man and Command Performance, two of his most notable directorial efforts which debuted many years ago, this latest, Castle Falls, in which he co-stars with Scott Adkins, is his best.

A decommissioned hospital is being stripped of its copper and other remaining valuables ahead of a controlled demolition.  Down, out and living out of his pick up truck, washed up MMA fighter Mike Wade (Scott Adkins) is a temporary laborer helping to strip the building.  High up on the sixth floor, Wade discovers three million dollars in sports bags.  He stashes it and after work, returns to retrieve it without telling anyone.  Elsewhere, prison guard Richard Ericson (Dolph Lundgren) has also heard through the convict grapevine about the loot and tries to sneak in and find it – he needs the money desperately to cover his sick daughter’s medical expenses.

But the owners of the dirty money, a paramilitary gang lead by Deacon Glass (Scott Hunter), seal the two men off in the building.  They must try to escape before it collapses in 90 minutes.

This is a nice little story-driven actioner, which sets up characters to genuinely root for. Adkins’ character, for example, is in rough shape, using the wing mirror of his pick up truck to brush his teeth. You of course root for the man, wishing him to successfully flee with the money. Empathy is also installed for Lundgren, who realizes that selling his house won’t even cover his dying daughter’s bills, so he sits in his car and cries (acting from the big man!).

Good VOD movies know their worth, they dispense with silly narrative over-reaching and keep things simple yet effective, then mix it up with competent but skinned-knuckle action sequences. Scott Adkins, fighting for his life ten floors up in a building that is going to collapse at any minute… I’ll take this over most bloated blockbuster CGI action movies, to be honest. Shaking cameras? Not here. Eye-frying editing? Nope.

I mean, this isn’t a big budget movie. But within minutes, you’d barely notice, with Dolph’s direction flowing easily and the acting being superb. I really want to see this type of collaboration with these two again. One of the more fun films I’ve seen in 2021.