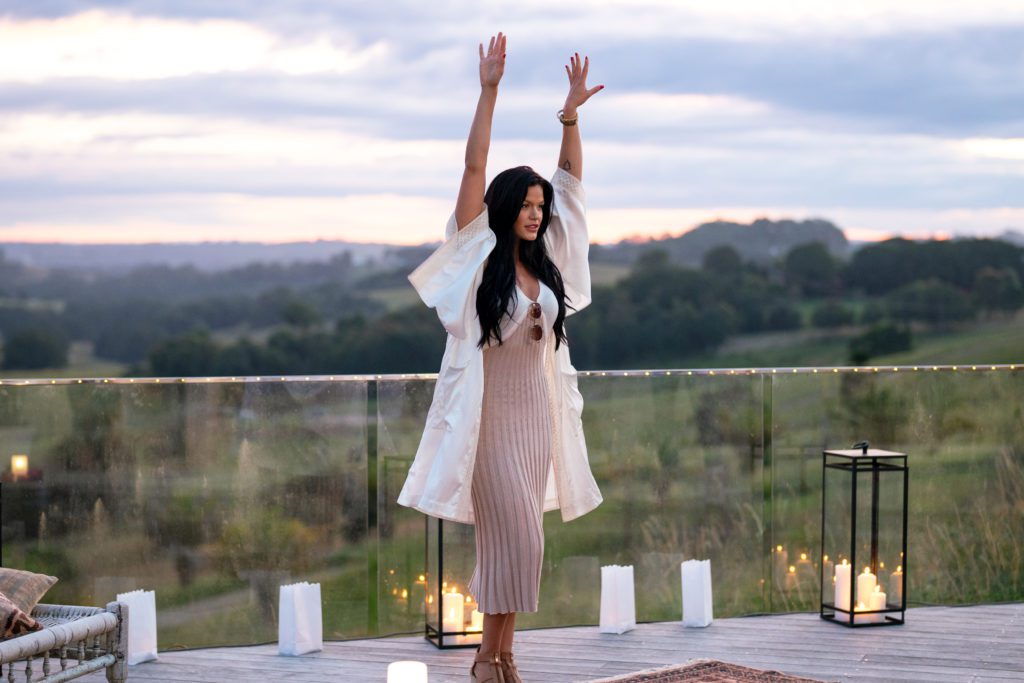 Welcome to Byron Bay, a beautiful beachside town in New South Wales, Australia. Sarah, a singer/influencer/pianist, is leaving her home on the Gold Coast to move to Byron, where she hopes she can establish connections and further her career. Jade Kevin Foster, an influencer (he’s got 1.2 million followers on Instagram, a fact he will not ends and start fresh. “Being an influencer can definitely be lonely,” he tells us. So what else is there to do but head to a scenic location – a “mecca for influencers”, as they tell us – and look for new pals?

Sarah and Jade soon join the group of Byron locals we’ll come to know and love (or hate) as our cast; there’s Hannah, a bohemian brand manager whose family has a company called Bisque, Elle, a drama-loving humanitarian of sorts, Jess, a fashion designer who got her big break when Kylie Jenner wore her clothes, Jess’s sister Lauren, a model, Nathan Favro, who you might recognize from Bachelor in Paradise, Love Island Australia star Elias Chigros, spiritual therapist Simba Ali, photographer Cai Leplaw, and Alex Reid, an aspiring manager who might just help Sarah get her big break. The group all comes together at Hannah’s big, glamorous party, where she hopes to resolve some tension with Jess. Despite a hoppin’ social event, there’s trouble brewing; Alex doesn’t trust Jade, and is determined to find out what his deal is, and there might just be a love triangle in Sarah’s future. This is only the beginning for these Byron Baes.

“There’s a lot of drama, especially in our friendship group,” we’re told, and Byron Baes delivers on this promise. It follows a pretty classic reality show format, taking us along for the ride as two outsiders try to navigate an established social hierarchy in a new, beautiful place, and it’s as effective here as it usually is. Most of these people suck (like, a LOT), but they make for great television; the key to a solid hate-watch is a ridiculous cast, and Byron Baes understands this. The series wastes no time setting up who our potential villains might be, and what kind of romantic and friendship drama lie ahead. It’s a solid pilot, and easy to start picking out favorites from the cast before the show even really hits the ground running.

The most delightful – and hilarious – thing about Byron Baes is just how little self awareness exists on the show. These people truly don’t have a damn clue how they are perceived, instead choosing to favor whatever idea of themselves they’ve concocted in their minds and present to the world via Instagram or other social media platforms. Each of these people thinks they’re doing something truly unique or offbeat, shaking up the system or wowing people with their individuality, but they’re all cut from the same cloth. With a handful of cast members who have already had reality show stints and are used to being in the public eye, Byron Baes is a showcase for the kind of delusional, melodramatic goofballs who make for great television. If you need me this week, I’ll be anesthetizing myself and hate-watching the entire season. You should probably do the same.