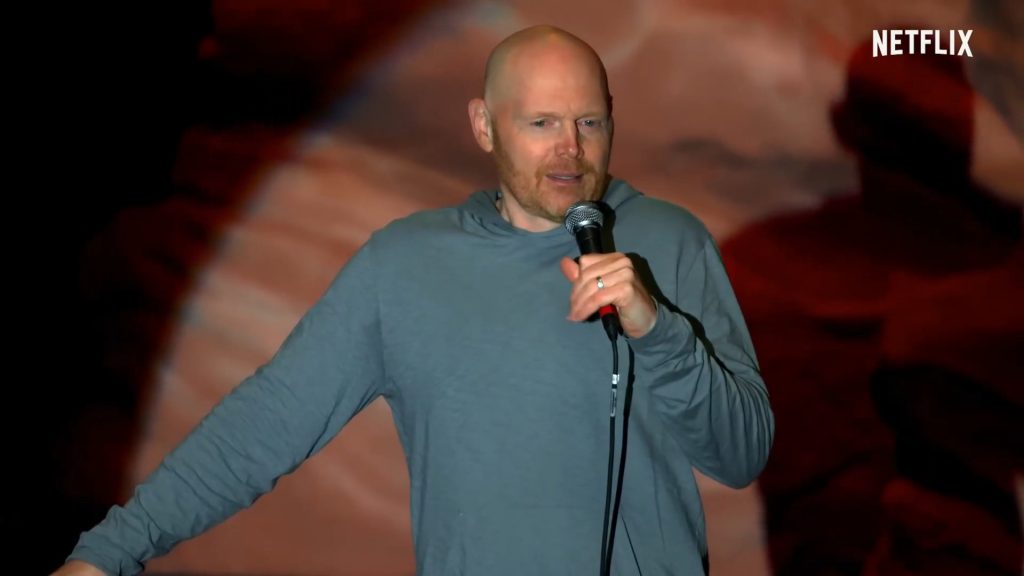 If you have no context about who Bill Burr is, watch it to acquaint yourself with his work – Live at Red Rocks paints a textbook picture about what he’s about within ten minutes. He begins with a great offhand roast of Denver – “Everyone here dresses like they’re going hiking.” segues into a bit about America’s polarized response to fighting COVID-19. He suggests there should be a Hunger Games-Esque fight between conservatives and liberals fighting to the end over vaccines. His voice of conservative America is a loud screechy man, Bible-loving, unfit physically. His idea of liberal America is feminine, overly articulate, and hypocritical at convenience. The dissonance of their tones is what makes it funny.

If you have seen Burr’s previous work, there’s nothing new here that you probably haven’t seen in some form before. You know he’s going to find something new he hates about canceling culture, you know he’s definitely going to pick on feminism. He draws an analogy between Sean Connery’s comments on striking women and Coco Chanel sleeping with Nazis and challenges the crowd to distinguish what was worse. His skill lies in how he builds an argument because he manages to make Connery’s comments sound way tamer than how they sound in 2022. He maintains people are a product of their time, a theme he’s explored to great depth in his animated show – F is for Family. In this edition of what Burr hates about women – he argues that women are to blame for the WNBA failing because they’re too busy spending their time looking at the Kardashians and fighting with each other.

Discussing stand-up through text is the worst medium to do it, especially because text cannot communicate to the viewer both tone and context. The tone is Burr’s biggest friend, especially because of the rage that has become a signature feature of his act. Hearing Burr feels like he’s bursting with the thought he’s currently speaking about, and it must definitely be his truth because it seems to be affecting him a lot to make him this angry. I personally believe stand-up has two kinds of audience members. The first who gives more precedence to what is being said. The second who believes this art form is about how you say things. If you’re a part of the second half, Live at Red Rocks is a delight because Burr truly finds hypocrisy in everything he makes fun of. If you’re a part of the first – well, it’s probably going to leave you ticked.

Red Rocks is a fitting choice for shooting a stand-up special in a post-pandemic time. It’s outdoors and in an amphitheater unlike his last couple of specials. Burr is framed almost like a pin prick in wide shots showcasing the venue’s iconic red sandstone, with the sea of nearly nine thousand people who’ve come to see him perform in the foreground. While an outdoor venue isn’t intimate, the special, directed by Mike Bender feels grandiose in its scale. “Come on, we’re in the woods!”Burr throws causally to the crowd when one of his jokes doesn’t land.

To me, Burr’s best bit is his experience having magic mushrooms, which took him back to his childhood, a dark place where he didn’t feel loved by his parents. He uses it to set up how different it is to raise a daughter he isn’t ashamed to love publicly. He talks about how his daughter is helping him deal with his anger and follows it up with how helpless he feels that a four-year-old is helping him better himself. These are his moments of self-reflection that feel truly intimate. The setup of one of his jokes explains his entire act perfectly. “If you can get through the misdirected anger of my childhood, what I’m trying to say is…

Burr positions himself smartly as a fence sitter in the beginning and end of his special, never really letting you who he stands against more, which gives him enough room to make fun of both sides. He ends with a great bit on abortion – where he compares abortions to destroying a cake in progress. “Yes, it’s not a cake but it would have been one” is the point he drives at while simultaneously declaring he’s pro-choice. He jokes about how there are far too many unremarkable people in the world, to fight for everyone’s right to be born. Burr’s real gift is to make you feel like your opinion, no matter where you stand on this debate is partially reflected through his rage. His act is of contrasts, a liberal who speaks like a conservative. Which is what makes listening to him (if you can subtract your personal opinion from his) such a great comedic experience.