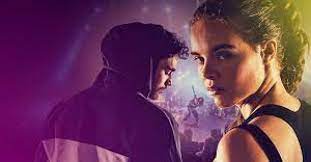 Amalie (Lisa Teige) is on cloud nine when her hip hop dance crew, Illicit, gains entry into Break the Cypher Paris, an elite dancing competition, featuring dancers from across the globe. But her decision to meet her estranged mother (Ellen Dorrit Petersen), who lives in the city, brings up old wounds. Her preoccupation with her mother puts a strain on her relationship with her partner Mikael (Fabian Svegaard Tapia) as well as her crew, who feels she isn’t giving the competition the importance it deserves.

Dance and drama make for a great combination when done right. But even complicated and breathtaking dance sequences aren’t enough to carry a whole movie, and Battle: Freestyle is the proof of it.

The film follows Amalie, a passionate dancer, who heads off to Paris with her crew for one of the most important competitions they’ve ever had to compete in, the prestigious Break the Cypher Paris. But as she meets up with her estranged mother, she finds herself losing focus on the competition, as her complicated relationship with her mother takes up most of her time and focus. The film had a very good opportunity to explore Amalie and her mother’s dynamic further, which certainly made for an interesting premise. But the way the film actually went about doing so is very disappointing indeed, one of the many instances that highlight just how bland and uninspired the writing is. In addition to being uninspired, the writing also suffers terribly from a lack of direction and clarity. Many elements that displayed a lot of promise suffer the same fate in the film, and viewers are left with half-baked storylines that go nowhere which the writers seemed to have called the time of death on, just when it got interesting.

The first half of the film drags itself off its feet only at the moments featuring dance sequences. There are very few times when the script gets to the actual point of its story, wasting precious time on unnecessary ‘filler’ sequences that have little to no impact on the story, including the moments where you get to see glimpses of Amalie’s relationship with her partner. The moments that were intended to be delightful end up dry as ever partly owing to some very frigid performances and the obvious lack of chemistry between them.

And chemistry is not something that features properly at all throughout the film. Amalie’s relationship with her beloved dance crew feels orchestrated. The latter treat her unfairly and their interactions seem like they have a gun to their head. The fact that the characters in question have as little depth to them as a shallow puddle may have played a big role in this.

The second half features the entry of some very intriguing characters, whose personalities shine tenfold than the leads’ combined. But sadly, they remain criminally underutilised, serving only as wayward forces to help Amalie ‘find herself’, which frankly does not help add to her uninspired character at all. The climactic dance battles take the sting out of the poorly executed story, although marginally.

Battle: Freestyle suffers from a lack of direction in its story, which quickly becomes bland as the film progresses. Mediocre performances and a glaring lack of chemistry between its lead stars add to the disappointment. The expert and eye-catching dance sequences, however, do come as its saving grace.