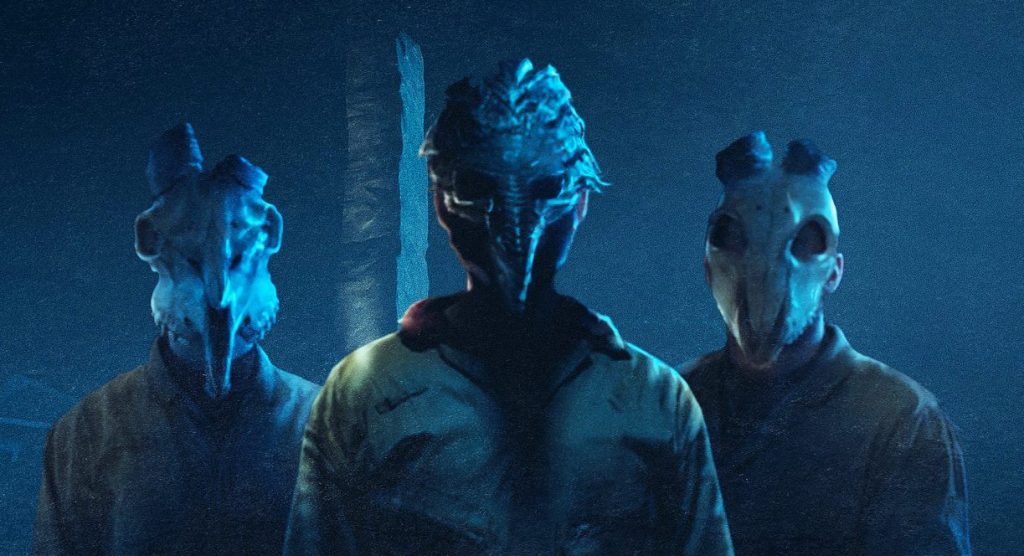 When looking for an actor that can play compelling, snaky evil, there aren’t many better ideas than phoning Iwan Rheon (the sick and twisted Ramsay Bolton from Game of Thrones). He is also not the only jerk in writer and director Charles Dorfman’s Barbarians (which comes from a story by Statten Roeg), boasting a small ensemble game enough to play an assortment of unlikable characters fueling a countryside birthday celebration that descends into weaponized secrets and home invasion survival testing whatever friendship remains.

Barbarians is also a tricky movie to discuss because the story is consistently evolving due to those revelations. What can be said is that it centers on a couple named Adam and Eva (the irony is not lost here) living on and tending to an ancient British land. The former (played by Rheon) is a struggling writer, whereas the latter (Catalina Sandino Moreno) is a recognized sculptor. Her work is also valuable to their friend Lucas (Tom Cullen), a braggadocious alpha male looking to renovate the land into something more touristy and for financial gain. He is the jackass he comes across as, arguably worse than Adam, who bears more quiet and calculated toxicity.

This also begs the question, who do you root for while watching Barbarians, especially when the home invasion curveball arrives? Admittedly, the script is not always successful at making this clashing of the haves and have-nots as fascinating as possible, but a quartet of slimy performances elevates a creeping dread. Lucas is currently going through a personal scandal, bringing his new girlfriend Chloe (Inès Spiridonov) to the get-together celebrating Adam’s thirtieth birthday. And if you are getting the impression that it’s only the men that have skeletons in their closet, well, you are in for another surprise.

However, the problem with Barbarians is that these characters also don’t feel entirely rounded and are more defined by their secrets than anything else. The subtext of class and folklore come across as underdeveloped and wasted. And despite the relative intensity and skilled craftsmanship of the home invasion itself, it’s hard to become fully invested in who lives and who dies or even why this is happening. There are also some serious lighting issues during the nighttime chaos (there is a scene inside a car that is so dark it’s almost impossible to make anything out), which would be a little more forgivable if the story and characters themselves were gripping.

By the end, Barbarians is a debut feature to appreciate but not one that fully absorbs. These characters are nasty, but not necessarily in service of the cutting social commentary, it’s hoping to achieve. Fortunately, the solid cast is enough to keep it intriguing and watchable, especially when all the dirty laundry has aired and the tables turn into a fight for survival.