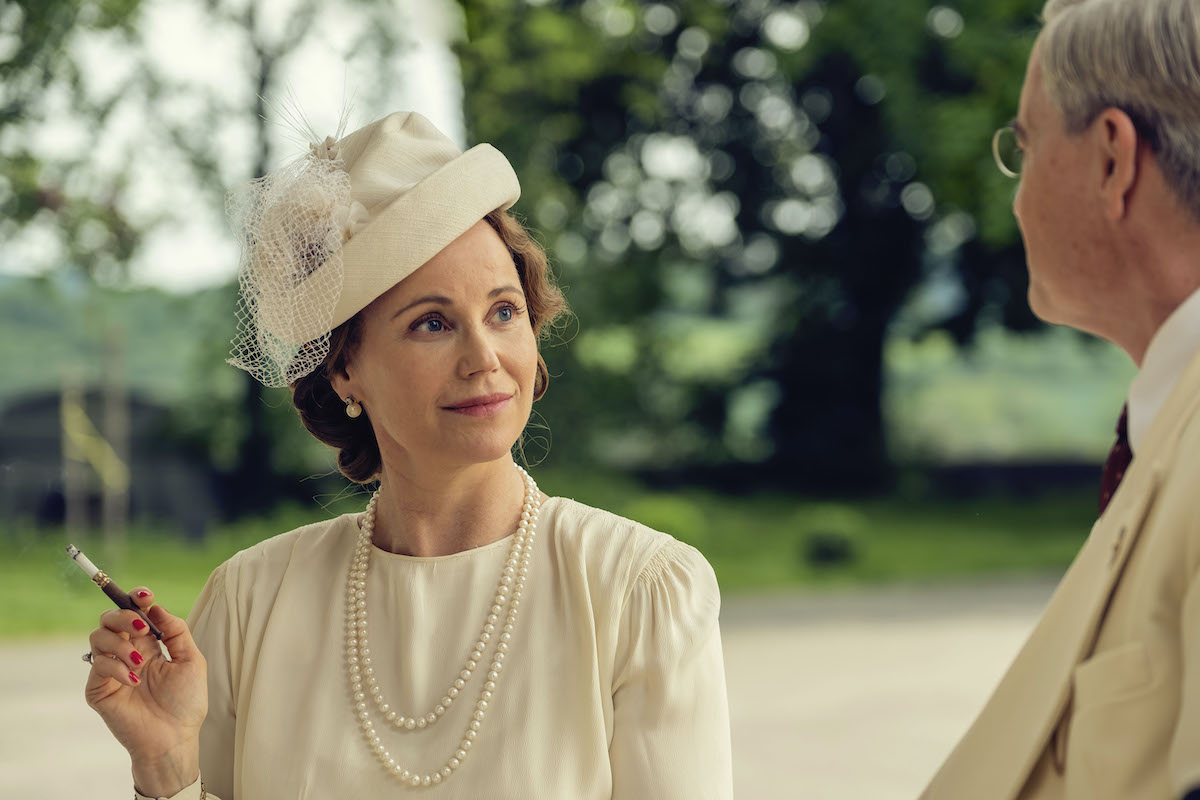 On the train is Norwegian royalty: Crown Prince Olav (Tobias Santelmann) and his wife, Crown Princess Märtha (Sofia Helin). They’ve been touring the country and have been enjoying themselves… a lot, as we see when they’re pulling into a station sooner than expected. When asked by reporters what the best thing about the US has been, Märtha clumsily says “My husband.”

Of course, that’s foreshadowing to a year later, April 1940. FDR has intelligence that Hitler wants to make a move into Scandinavia, most likely Norway, due to the fact that they produce a lot of steel.

In Norway, Märtha gets her first clue something might be up when Olav has workers put blackout shades on the windows in their residence. And then when Olav’s father, King Haakon VII (Søren Pilmark) comes by, dinner talk between father and son is about Hitler and the Parliament’s stubborn insistence on remaining neutral… until Märtha reminds the men that their kids are at the table.

After a pleasure cruise full of civilians is attacked by German planes, Olav is convinced that the country should mobilize its defenses, and tells the prime minister that at a reception that night. The next day, things get more dire as German fighters fly over the royal residence. Olav dons his uniform, and he and his family evacuate.  Märtha’s assistant Ragni Østgaard (Anneke von der Lippe) is also asked to evacuate with her family, though she has to leave a note for her teenagers, who are out on a Red Cross exercise.

But when their train is attacked, plans change. Olav and King Haakon go off with the members of parliament, but Märtha convinces Olav that she and the kids should seek refuge in Sweden, where Märtha’s father is the king. They make a run through a border gate when denied access through, but Olav and his father come under direct attack and run through the forest to escape.

Atlantic Crossing, created by Alexander Eik, first aired in Norway in 2020, so it stands to reason that the focus of the show will be on Märtha as she and her kids eventually make their way to the U.S. and get assistance from FDR. We’ll see their friendship expand over the miniseries’ eight episodes, likely seeing much more of MacLachlan and Harris as Franklin and Eleanor in the process.

But the first episode is mostly about how the couple got separated as the Nazis began their invasion of Norway, and, while things move slowly at the beginning of the episode, you can sense the palpable fear from everyone as the planes swoop overhead, ready to shoot at anything.

Helin is especially strong as Märtha, who insists on going to Sweden to protect her family, even if Olav thinks that makes them look like they’re giving up. She’s looking out for her family first and foremost, and Olav is looking out for Norway. Both are right, and Helin displays a lot of strength in standing up to Olav and making sure her children were as OK as they could be under those circumstances.

What we’re likely to see in coming episodes is the Norwegian army putting up a fight that their neighbors in Denmark couldn’t, even though the Germans ultimately prevail, and Märtha and her family eventually making it to the US. We don’t know a whole lot about the actual history of Märtha’s friendship with the Roosevelts, but we’re considering the series is “based on true events,” as a graphic says at the beginning of the episode, there will be a lot of dramatic license taken. And that’s fine with us.

What we want to see more of is MacLachlan and Harris as the Roosevelts. In the few scenes of the two of them we got to see in episode 1, it felt like a good pairing. MacLachlan captures FDR’s Mid-Atlantic patrician manner without making it a caricature, and Harris is especially adept at showing Eleanor’s intelligence and ability to be a complete wiseass to her husband, even with a smile on her face. It really was the one aspect of the first episode we latched onto, much more than the vanilla relationship between Märtha and Olav.