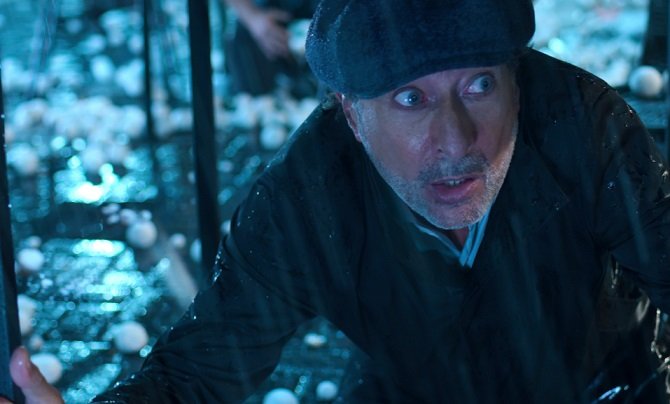 Netflix will premiere on March 30 the new film by Marcos Carnevale , written by Fernando Balmayor and the Oscar® winner for Birdman or (The Unexpected Virtue of Ignorance) , Nicolás Giacobone , something that is surprising especially due to the lack of empathy they seem to have them for the characters that swarm through the film. Some caricatures that in turn are born from interesting ideas.

The story of Miguel Flores begins with success, one so extraordinary that it has put him in charge of a weather forecast program on broadcast television. A bizarre show and without a doubt, with little subtle irony about the celebrities of the medium, which even has a live band, none other than Los Palmeras . Miguel’s fame has to do with the fact that he has never missed a forecast, a weather guru that the neighbors admire and see as the infallible oracle. Of course, he reacts with the honest humility of someone who knows he has that undeniable touch.

History draws the transience of television celebrities, those that are born from segments and that take over the screens with meteoric speed, more daughters of casual tastes of the viewers than for their work itself. Because he is not an improvised, he is a graduate in Atmospheric Sciences obsessed with forecasting for a particular tragic story that rewrote his personal life. There is more, a daughter far away, in Córdoba, which is not only a physical distance, but also an emotional one, and a compendium of characters that seem more typical of a fable than troupes of this universe led by Miguel Flores and his trauma.

Things will not go well, it is obvious, and he predicts (you will be able to forgive this word so many times) a warm night in Buenos Aires, in the first broadcast of his television program, to later see how the sky falls in a hail storm that unequivocally, for his faithful followers, means disasters, with deaths included. But wait, my dear reader, this is not an introspective drama about human fallibility, a fantastic romance where the weather is a metaphor or symbolism of something, it is not Gore Verbinski ‘s The Weather Man (2005) . Play with the comedy of manners (what an easy term…), with the grotesque criollo perhaps, and with a drama about the survivors of family tragedies that soon becomes as blurred as the path of Miguel Flores.

It’s strange, at times forced, and the idea of ​​some kind of ensemble cast of characters is lost due to the lack of development of these, of really thinking of them as something alive and meaningful in history. Peto Menahem ‘s taxi driver and Norman Briski ‘s grandfather in charge burst into the narration as if it were another film, like an absurd comedy insinuated in the one starring Guillermo Francella . There is a point of interaction, but they cowardly minimize it in search of a satisfying ending that loses all meaning. Shall we mention that Oscar® winner Nicolás Giacobone writes here ? There is something of Birdman here, with those expository creatures that disguise themselves as complex in their sayings, but not in their actions.

Let’s go back to the plot of the taxi driver from Peto Menahem , a somewhat strange fan of Flores, who fervently believes in his predictions and because of the hail storm his work tool, the car, is destroyed. His insurance is a smoke sale that leaves him with technicalities, the passengers avoid him, adding his wife, a demanding housewife and lost in the daily mess of the home, plus the jokes of his fellow drivers for his faith in the protagonist (jokes homophobes involved) explodes into a psychosis like Michael Douglas in Falling Down (1993) and embarks on a journey of compensation against Flores, who is hiding in Córdoba at his daughter’s house. This is an example that would also apply to the story of his daughter, played byRomina Fernandes , plots simply discarded in a scene without tension or emotion, expository.

The dramatic tension is diluted in anticlimactic scenes; as if there was no time for them. So the drama that takes Flores to his Buenos Aires and meteorological paths feels fortuitous as random as the rest of the closures in the co-protagonist characters. And we have not even commented on the ending that strives to be emotional, in more than one field, but that seems to come from a disaster film and not from a dramatic comedy about characters meeting again.

In any case, we let the viewer have the last word on the matter, because more than not liking the film, we see that they have wanted to tell so much that they largely forget where the story of Miguel Flores and his “Hail” storms could have gone.