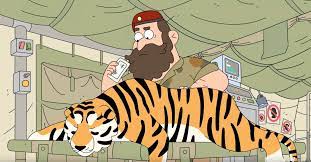 Bradley Trevor Grieve is a best-selling nature author and presenter who came to people’s attention in the early 2000s; he does seem like he’s quite the character, so making him into a cartoon isn’t as weird as it seems. In the new Netflix series Adventure Beast, BTG basically plays an animated version of himself, and the fact that he doesn’t take himself at all seriously is a plus.

A shot of the Earth, with Ethiopia highlighted. Then we see the heads of ostriches. A graphic says “Ethiopian Foothills”.

Veteran explorer Bradley Trevor Greive (himself), or BTG, is doing a “parasite census,” where he has a list of wild animals that he needs stool samples from; his aim is to study the parasites that are living inside of the various species’ poop. He’s dressed as an ostrich — which has a symbiotic relationship with the zebra — trying to probe one of those zebras when he’s interrupted by the screeches of his assistant Dietrich (Josh Zuckerman).

He’s surrounded by bees but is deathly afraid of the “flying hypodermic needles.” He’s afraid of most of nature, which is why he thinks he’s survived as BTG’s field assistant for a decade, when every previous assistant died quick and horrible deaths (and their names all seem to rhyme). BTG’s niece Bonnie (Danice Cabanela) is on her first adventure with her uncle, and she wants him to see that she’s now an adult that can take on tasks and make good choices in the wild.

She overpacks, including a tranquilizer gun, which is when we see a flashback to Cambodia 30 years ago, and a young BTG taking care of tigers instead of people as one of Australia’s top paratroopers. He’s dedicated his life to animals in the wild and he figures if he needs a gun to get out of a situation, he’s doing something wrong. That’s the first rule of working for Grieve Expeditions — right along with “Never try to save BTG.”

We also find out how Dietrich ended up as BTG’s field assistant, and some of the adventures that Bonnie engaged in over the years, which she thought proved to her uncle that she can handle things herself. But if wrestling alligators wasn’t going to convince him, nothing will. That is, of course, until he gets severely injured by lions, and, as he’s soaking the bites in the river, he asks Bonnie to get the final sample he needs, from a “magnificent” mountain ayala.