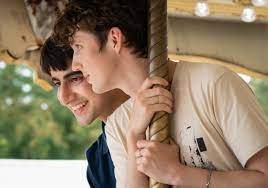 After supporting roles in X-Men Origins: Wolverine and Boy Erased, music sensation Troye Sivan is stepping into the lead with the heartfelt, coming-of-age dramedy Three Months, from writer and director Jared Frieder and the producers behind Juno and Up in the Air.

ET has the exclusive first look at the trailer, which shows Sivan as Caleb, a South Florida teen about to graduate from high school who’s just learned he’s been exposed to HIV. Despite his life being put on pause as he waits three months for his test results, Caleb manages to find love in an unexpected place.

“At its core, it’s a film about dismantling the shame around HIV and showing that it’s no longer a death sentence in our modern world with access to healthcare,” Frieder shared in a statement about the film, adding, “It’s about a kid coming of age and realizing that the very things that make him different also make him indispensable and worthy of love. And perhaps most of all, it’s about what it’s like to wait.”

Sivan, who also has been cast opposite The Weeknd in the upcoming HBO series The Idol, can also be seen in Rihanna’s 2021 star-studded and inclusive fashion show, Savage X Fenty Vol. 3.

Speaking with ET in September, Sivan explained why the moment was so important to him. “I think, as someone who struggled with my sexuality when I was younger and body image later in life, it’s so, so important,” he said. “It’s cool to get everyone together and feel really hot and feel really cool. Just to celebrate that humanity is really nice.”

And with Three Months, he’ll be able to celebrate humanity in a different kind of way, bringing the story about a queer teenager finding love to the masses while also dealing with something that’s plagued the LGBTQ community for decades.