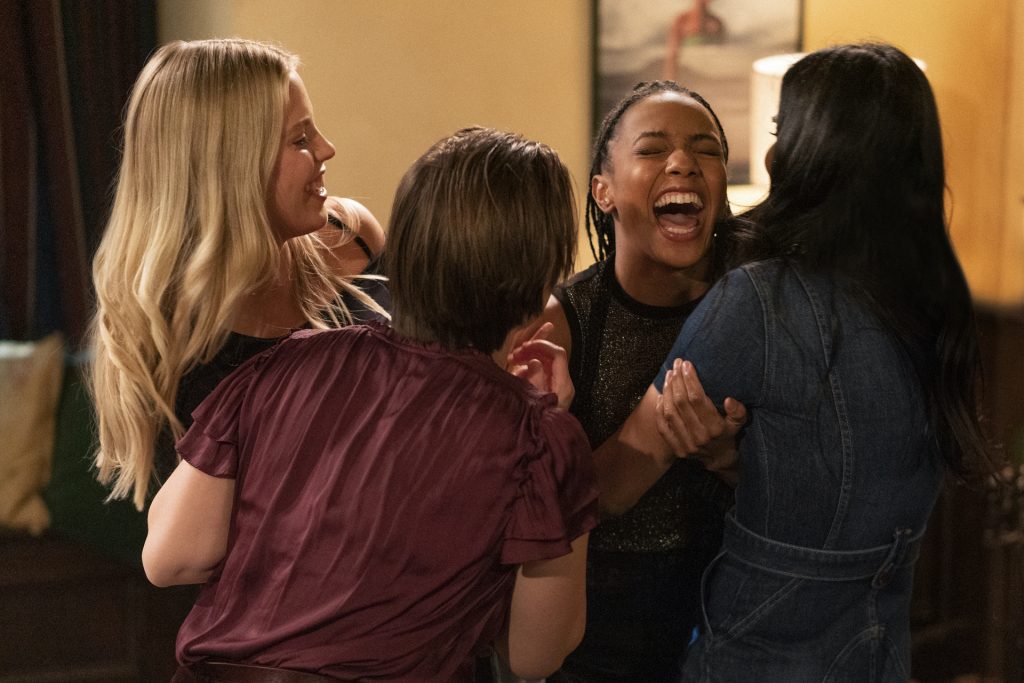 There’s a fresh-faced innocence to HBO Max’s “The Sex Lives of College Girls,” despite the shots of shirtless young men and unvarnished dirty talk. In a streaming television landscape packed with the darkest of concepts screaming for your attention — clever serial killers, murderous children’s games, dark mysteries at luxury resorts — “Sex Lives” posits that young women with conflicting desires, raging hormones, grand ambitions, some smarts and a dash of youthful idiocy will be enough to ensnare viewers. And that proves true, at least in the able hands of writer-producers Mindy Kaling, whose distinctive voice fuels her growing TV empire, and Justin Noble (“Brooklyn 99,” “Never Have I Ever”).

The series may not break entirely new ground like Netflix’s bracingly sex-positive “Sex Education” or Kaling’s brilliantly specific portrait of a grieving Indian-American family on “Never Have I Ever.” But “Sex Lives” assembles several familiar parts — call it “Sex and the City” for modern college girls, or “Greek” with sex positivity, or “Sex Education” with an emphasis on the female gaze — into a package that is so fun that we don’t mind one bit. And that’s thanks largely to Kaling’s knack for lovably flawed characters, killer one-liners, and romantic comedy pairings that keep us watching.

“Sex Lives” focuses on four freshman college roommates at the fictional Essex College, a prestigious, private school in Vermont. Bela (Amrit Kaur), an Indian-American, tells her parents she’s studying molecular biology but comes to college with two crystal clear ambitions: to become the next Seth Meyers and have tons of sex. Kimberly (Pauline Chalamet) is an extremely sheltered young woman on financial aid who’s saving herself for her boyfriend from back home in small-town Arizona. (“We’re from the whitest town in the world,” she explains. “Dad won’t even eat tacos.”) Leighton (Renée Rapp) is aggressively white in different ways: She graduated from Manhattan private school Spence and is still closeted as she pursues upward social mobility and sorority rush. (“I don’t want being gay to be my identity,” she tells a dating app hookup. “I like my identity.”) And Whitney (Alyah Chanelle) is a Black senator’s daughter and star soccer player who’s having an affair with her married, adult coach.

The core four work beautifully together, and the college setting makes the stuck-togetherness of such different personalities feel believable. Kaur is a revelation as a horny and funny young woman who happily broadcasts both of these traits to the world. Chalamet (yes, of those Chalamets) is equally charming as an unapologetic dork not terribly concerned about seeming cool, but struggling with the stark class difference she’s encountering for the first time in her life. Rapp chews the scenery from her sweet spot; Leighton’s public persona isn’t that far from that of Regina George in “Mean Girls,” a part Rapp played in the Broadway musical. Chanelle, in the first six episodes (of 10) made available for review, gets short shrift in the limiting plotline of her mostly secret affair with a guy who’s kind of a dud.

Whitney gets more interesting with the presence of her politico mother, played to no-nonsense, don’t-have-time-for-this perfection by Sherri Shepherd. Senator Yvette Chase is just one of several stand-out supporting characters, a key to making such a relationship-driven show shine. Midori Francis, so irresistibly delicate in the Netflix series “Dash & Lily,” brings just as much appeal to a totally different role here as a sexy, confident lesbian who runs the Women’s Center and becomes an unlikely love interest for Leighton.

Ilia Isorelýs Paulino and Christopher Meyer will make you wish there was an entire spinoff show just about their work at the campus café with Kimberly. Lauren “Lolo” Spencer, who calls herself a disability lifestyle influencer and uses a wheelchair because of ALS, proves expert in delivering Kalingesque dialogue. And Gavin Leatherwood, as Leighton’s brother and Kimberly’s crush, Nico, does what he needs to do on a show that overtly privileges the female gaze: He is smoldering and charming and inscrutable and romantic in just the right proportions.

Speaking of those Kalingisms, the scripts deliver the requisite zingers. But the show is at its best when it gets deeper in later episodes — most notably when it’s addressing lingering sexism at the school’s humor magazine, the Catullan, which Bela is desperate to join. “Sex Lives” also stands out in how it allows its female characters to pursue sex with reckless abandon. It does so without apologies, repercussions, or remorse; and, once we’re past the first few extra-bold uses of the word “f—” in the premiere episode, it doesn’t congratulate itself in the process either.

The shift is a subtle but crucial one. On this show, the girls simply enjoy sex as much as the boys, and have plenty of fun, heartbreak, and embarrassment along the way. Bela spends one entire episode pursuing a long-held goal of sleeping with a guy with abs; she’s annoyed to find that her abs guy is a “chuckle f—er” who has a fetish for funny girls. “I told him he reminded me of David Beckham,” Bela says, disappointed. “And he told me I reminded him of Larry David.”

Though any number of creative teams could make a show about the sex lives of college girls, and maybe even a good one, only a singular vision worthy of the Kalingverse could produce a plotline — and a line — like that.