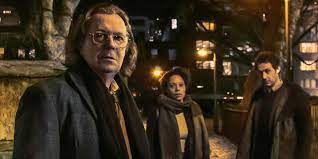 Slow Horses, billed by Apple TV+ as a “darkly funny espionage drama,” seems to be unable to decide quite what it is. The drama is there, it is dark, and there’s espionage for sure, but the laughs are few and far between. Academy Award winner Gary Oldman stars, alongside Oscar nominee Kristin Scott Thomas and relative newcomer (to leading man status, anyway) Jack Lowden.

The series gets off to a promising start, right in the middle of the action as a covert MI5 operation is underway at a London airport. Lowden, as River Cartwright, carries the first sequence, which is reminiscent of the pulse-pounding first scene of another British espionage drama Bodyguard, starring Richard Madden. The style of the cinematography and even the action-laden beats of the score are very similar, but where Madden’s David Budd saves a train full of civilians from a suicide bomber, Cartwright bumbles his mission, losing the suspect he’s supposed to be tailing and chasing him through the airport terminal to an adjoining train station, knocking down numerous civilians and law enforcement officers along the way. When he finally reaches the alleged terrorist, it’s too late, as the man uses a handheld detonator to set off the bomb.

Luckily for Cartwright — and all those innocent travelers — it was all a training exercise. If it had been real, Oldman’s Jackson Lamb tells Cartwright he would’ve caused the deaths of 149 people, 212 injuries, repairs of more than £3 million, and the loss of billions in revenue. Since it was merely a training exercise which Cartwright managed to royally screw up, he’s reassigned to Jackson Lamb’s Slough House, described as “a dumping ground” for MI5 intelligence agents due to potentially career-ending mistakes.

“Another day dawns on MI-fucking-useless,” Lamb says, after the obligatory shots of a dingy, dodgy office in which the Slough House agents work in dreary downtown London. It’s one of Oldman’s first lines of the series, and it comes after he wakes up in his office, farts, lights a cigarette, coughs up a lung, and greets his secretary by yelling her last name at the top of his lungs. Oldman is one of the best actors of his generation, if not the best, so it’s no surprise that he inhabits this role fully, and within minutes, he shows just what kind of character the leader of this group is going to be. When we next see Cartwright, he’s a bit more grizzled than he appeared in the opening scenes, and he’s literally sifting through garbage, one of his first assignments for Lamb. When he says he’s not sure what he’s looking for, Lamb responds glibly, “The remnants of a once-promising career.”

From there, the action of Slow Horses slows way down, true to its title. The rest of the episode (and the following one) is setting up a story that will continue throughout the series, of a young Muslim man who is kidnapped by a group of far-right extremists. Though he’s, of course, told not to interfere, Cartwright can’t help investigating it himself and trying to find the young man, and those responsible for his disappearance, before it’s too late. It’s clear that Cartwright would do anything to exonerate himself after the training exercise fiasco and live up to the name his father (played by Jonathan Pryce) established in MI5. After a heart-to-heart with River, you know that the elder Cartwright’s words of wisdom will come into play later in the series.

But here’s where Slow Horses seems to be having something of an identity crisis. Apart from the occasional snazzy one-liners from Oldman’s Lamb, there isn’t much to find in terms of funny here — even when it comes to dark humor. The series seems to be trying to find the heart-stopping action of the aforementioned Bodyguard, with dashes of the humor from Killing Eve and Guy Ritchie’s Snatch thrown in, but it never quite gets to the level of any of those dramas, despite its killer performances across the board.

Lowden holds his own against the powerhouse that is Oldman, and it’s entirely possible this series could catapult him to star status if it finds its footing and its audience. Scott Thomas also turns in fine work here as the head of operations for MI5 — the badass calling the shots from the safety of a control room filled with computer monitors and state-of-the-art technology. The side characters who make up the rest of Slough House — the tech guy (Christopher Chung), the bumbling agent (Dustin Demri-Burns) who has a crush on his fellow coworker (Rosalind Eleazar), the agent who actually knows what she’s doing (Olivia Cooke), and the secretary, Catherine Standish (Saskia Reeves) — all have their own subplots to tell, which can make the overall narrative feel convoluted.

Slow Horses is at its ultimate best when it focuses on Cartwright, Lamb, and Scott Thomas’s Diana Taverner. Although trying to use Lamb’s tendency to break wind as a way to inject humor often falls flat, the dynamic between Cartwright and Lamb, as well as Lamb and Taverner, is worth the watch alone. However, it’s the side stories and the flatulence in between that detract from the overall story. If the series trimmed the fat, it would succeed at being a lot more compelling. Here’s hoping that later episodes to come will hopefully up both the drama and the comedy (as long as it isn’t more fart jokes).