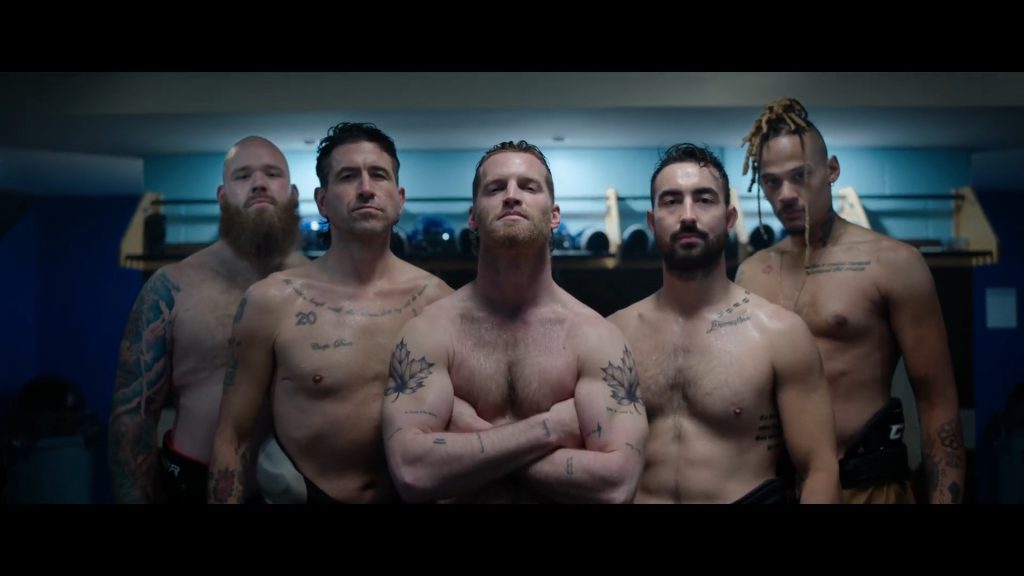 Shoresy is playing for the worst team in the “No Show League”, the nickname for a four-team senior league in the northern Ontario city of Sudbury. While the Bulldogs’ coach is trying to tell his team they tried hard and played well, Shoresy is taking his usual post-game dump and yells that he’s vomiting at the same time. “We get pumped five-goose for the 20th loss of the campaign and you say ‘Good fucking team over there?’” We finally get to see his face when he exits his stall.

Word of his team’s struggles rockets around Sudbury, where hockey, drinking and fighting are pretty much the extent of the city’s social life. Shoresy even gets dragged for it by the teenagers in a junior league game he’s refereeing. Rumors are also rampant that Nat (Tasya Teles), who runs the team after inheriting it from her father, is going to fold it.

Shoresy goes in with his best Sudbury buddy Sanguinet (Harlan Blayne Kytwayhat) and promises over and over that the team will “never lose again.” How is that going to be accomplished? Because Nat let go the coach he insulted, Shoresy thinks that Sanguinet — always a healthy scratch, so he’s not playing anyway — can coach, and “Fuckin’… one top line of Canadian grade studs to fill the net and surround them with the toughest natives we can find.”

Fans of Letterkenny know that Shoresy is vulgar, a dirty hockey player, and arrogant as all get out. Let’s just say the fact that he uses dip and constantly walks around with a disgusting spit cup isn’t out of character for him. But he has pride, in both his own playing skills and the teams he’s on. Placing him in a small city like Sudbury and promising that his team will “never lose again” is a good setup for this spin-off, even if the first episode itself isn’t all that funny.

There’s a lot of repetition, especially the phrase “Pumped five-goose for the 20th loss of the campaign.” It’s supposed to tell us that the Bulldogs are bad and the entire city knows it, but the joke got old after the 2nd or 3rd time it was said. The extended junior hockey sequence where he keeps riding a kid and calling him thinks like the “Clearasil Kid” and “Fuckin’ pimple farmer” is probably the funniest sequence in the episode. Some of the other back and forth, like Shoresy’s story of Sanguinet getting favors in a river or a lake or something like that just sit there because they don’t really advance the story.

In essence, the story is likely supposed to be a Ted Lasso-esque tale of this team turning their fortunes around, thanks to the efforts of Shoresy. What we hope is that, given how simplistic the plot of the season is, the jokes get sharper and funnier.